Autoswitching sites continue to grow as customers look for better deals without the hassle. But is regulation and consolidation on the cards for the future? Rachel Willcox reports.

As a nation obsessed with getting a good deal, it is no surprise that more consumers than ever regularly change energy providers to chase the best tariffs and manage their energy costs. Despite a booming switching market, the process remains relatively complex for consumers and problematic and time-consuming for suppliers as they are forced to resolve MPAN (Meter Point Administration Number) errors, address incorrect meter readings and the dark art that is calculating final billing information.

The combination of mounting consumer frustration and advances in technology have spawned the auto­switching market, and since 2016 a host of services including EnergyCheck, Switchcraft, Flipper, Switchd and WeFlip have emerged. Autoswitchers monitor the market to compare tariffs and automatically switch customers when their contract ends, with their permission, to the cheapest deals. It helps keep consumers stay off standard variable tariffs, which can be far more costly than fixed tariffs. However, the process doesn’t bring unbridled benefits either. Concerns about autoswitching services were highlighted by a report from Citizens Advice last month (see also page 29), which drew attention to a lack of regulation of third party intermediaries (TPIs) in the energy retail market. But more of that later.

“Autoswitching sets out to address the issue of loyal customers being penalised with creeping price increases, while new customers benefit from better rates as an incentive to sign up, with the result that elderly and less internet-savvy customers tend to pay more,” says Bill Harmer SVP EMEA at data management and analytics company Information Builders. The reality is that even those consumers who do engage with price comparison websites (PCWs) don’t switch as often as they should because checking tariffs every month and then switching yourself is a hassle, especially for a low saving.

Mark Gutteridge, managing director of Bristol-based Flipper, says autoswitching has helped to increase repeat switching, and is also forcing PCWs to “up their game”, with some launching their own autoswitching services and others introducing price monitoring/alerting functionality. “It has contributed to strong switching volumes away from the big six over the past 12-18 months, which has led to the big suppliers either offering improved tariffs to try and win back or retain customers, or exit the market altogether. All of these are positives for consumers.”

Last year, 6.9 million people used a third-party service to compare or switch their energy supplier, according to Ofgem. Citizens Advice estimates that in that same period around 300,000 people used autoswitching services, although just-published customer numbers from WeFlip of 300,000 suggest the actual market figure to be much higher. Zoe Harris, chief executive of WeFlip, believes 400,000 customers represents a more realistic number.

As the country moves towards net zero and consumers increasingly turn to TPIs to help manage their energy use, Harris is bullish about the growth potential of the market. She tells Utility Week that the company is going after the 60 per cent of energy customers it believes are in the market for autoswitching services.

David Lewis, an energy expert at PA Consulting, has a more cautious outlook on the market opportunity. “It’s not clear who will sign up to autoswitching services. They may well end up being people who would have signed up to a new cheaper rate anyway. Autoswitching services will probably increase the frequency of switches for these customers. Autoswitching might also ensure that switching actually happens, rather than what happens at the moment where someone looks at a new deal but then gets distracted by everyday life and never completes the switch.”

Lewis predicts that mid-tier energy suppliers might be at more risk than the larger suppliers, bearing in mind that mid-tier customers are more engaged with the market and have already demonstrated a willingness to switch. “In contrast, the larger suppliers tend to have a much bigger proportion of sticky customers who are less likely to be swayed by a new switching service,” he says.

It is hard to see how autoswitching will impact the very sticky customers who don’t really consider who their supplier is, let alone look at their bills, and don’ look for a better option out there, Lewis says.

The challenge for energy retailers is ensuring they keep an eye on the wholesale market prices, current and predicted usage, and competitors’ tariffs, in order to deliver flexible tariffs that attract new customers and retain existing customers who might be tempted to switch.

Rumours are also rife that the autoswitching market has spooked energy retailers, nervous about the impact of autoswitching on their revenues and concerned it will result in a race to the bottom and unsustainable energy prices. “If autoswitching does push prices down, incumbent suppliers will have to work harder,” says Lewis. “They will need to look at what extra services they can provide or create a greater customer community. Customers who are tempted to switch are more engaged and more likely to be looking for services and extras.”

Flipper’s Gutteridge agrees: “Autoswitching is absolutely not about driving a race to the bottom. It should be about wanting to move customers to a better deal, but one that is great value, not just ‘the cheapest’. More focus on the level of customer service provided by a supplier than their tariff rates. It should also allow customers to set their own preferences, for example, ‘only larger suppliers’ or ‘only green tariffs’. The customer has to have control.”

Garry Hamilton, a director of digital agency ­Equator, says there are real challenges in establishing a sustainable model for autoswitching that works for both consumers and suppliers. “Low margin tariffs require longer-term customer loyalty in order to afford the initial acquisition commissions. Suppliers bank on consumers buying add-on products or installing new technology. But it is difficult to see how a platform’s promise of the lowest prices for consumers and a valuable channel to market for suppliers can stack up with a model predicated on agitating annual churn.

“If the only way to build valuable relationship with consumers is reduced to simply bidding a low price each year, suppliers will continue to see issues around unsustainable pricing, poor customer satisfaction and lack of real innovation in the sector,” Hamilton adds.

His warning appears to ring all too true after concerns about autoswitching services were thrust under the spotlight following publication of a damning report by consumer group Citizens Advice, amid long-running concerns about a lack of regulation of TIPs in the energy retail market.

The report Stuck in the Middle warns that energy autoswitcher customers are not always getting the best deals, after the consumer group found that some services compare fewer than 15 out of around 70 possible energy suppliers, despite claiming to cover most of the market. As a result, some customers are paying £70 a year more than if they’d found a good deal and switched themselves. Some autoswitchers were also providing inaccurate or unclear information, making it difficult for consumers to make informed choices about using the service.

Citizens Advice highlighted cases of autoswitchers failing to cancel a switch, leaving customers stuck with a supplier they were unhappy with or facing exit fees. It also flagged up bill-splitting companies failing to pass on communications from suppliers, leaving people in unexpected debt and consumers in vulnerable situations losing some of the services they rely on as a result of being switched without warning.

The charity wants the government to use the upcoming Energy White Paper to make sure consumer protections for the energy market are brought in line with other markets like insurance, overseen by Ofgem, which Citizens Advice believes would ensure a good balance between consumer protections and ongoing innovation. This would mean people could resolve complaints via an ombudsman, oblige firms to treat their customers fairly and offer more protections to vulnerable customers.

Gutteridge says he hopes the findings of the report will lead to autoswitchers needing to provide greater transparency on the service they offer. Flipper manages the list of “live” suppliers it switches to based on their customer service performance tracked using the company’s own internal data plus information from Ofgem, Which? Trustpilot and Citizens Advice. “We can do this as we don’t take any commission from any supplier.”

Ofgem says it welcomes any government proposals to increase regulators’ powers to enforce consumer protection law, which would deter poor behaviour by companies in the retail energy market, including TPIs such as autoswitchers. “We want to see all companies in the retail energy market work hard to ensure they are meeting customers’ needs. We want consumers to be confident in engaging in the energy market no matter which platforms they use to do so,” says a spokesperson.

Industry body Energy UK says it welcomes services that help consumers find a better deal and engage in the energy market. Dan Alchin, deputy director (retail), says: “Energy UK services, like autoswitching, are being used by customers to make important choices and are increasingly making decisions on behalf of consumers. This is a responsibility that warrants regulation by Ofgem to ensure customers, especially those in vulnerable circumstances, are protected and have appropriate recourse.”

In anticipation of any regulatory changes, consolidation of the autoswitching market looks inevitable. Look After My Bills, which appeared on the BBC programme Dragon’s Den in August 2018, was snapped up in July last year by GoCompare parent GoCo Group in a deal worth £12.5 million.

Meanwhile, for autoswitching to have a significant and meaningful impact on the market, services need to evolve to provide long-term valuable relationships between customers and suppliers. “It is only when auto­switching starts to provide long-term sustainable volumes to energy suppliers that it will become a really important customer acquisition channel,” says price comparison website energyhelpline co-founder Mark Todd. “Markets only develop through innovation, and it is the suppliers who embrace innovation and adapt in concert with market changes who will grow and win.”

The lack of regulation of third-party intermediaries (TPIs) such as autoswitching services is leaving customers with “serious problems”, according to Citizens Advice.

A total of 7 million people used a third party service to compare or switch their energy supplier in 2019 and this figure is expected to rise as the UK moves towards net zero emissions by 2050.

The charity’s Stuck in the Middle report published earlier this month highlights how there is currently no direct regulatory oversight of energy TPIs, a generic term that includes price comparison sites and autoswitching sites, which also include energy brokers and bill splitting services, meaning consumers can struggle to resolve problems when they arise. 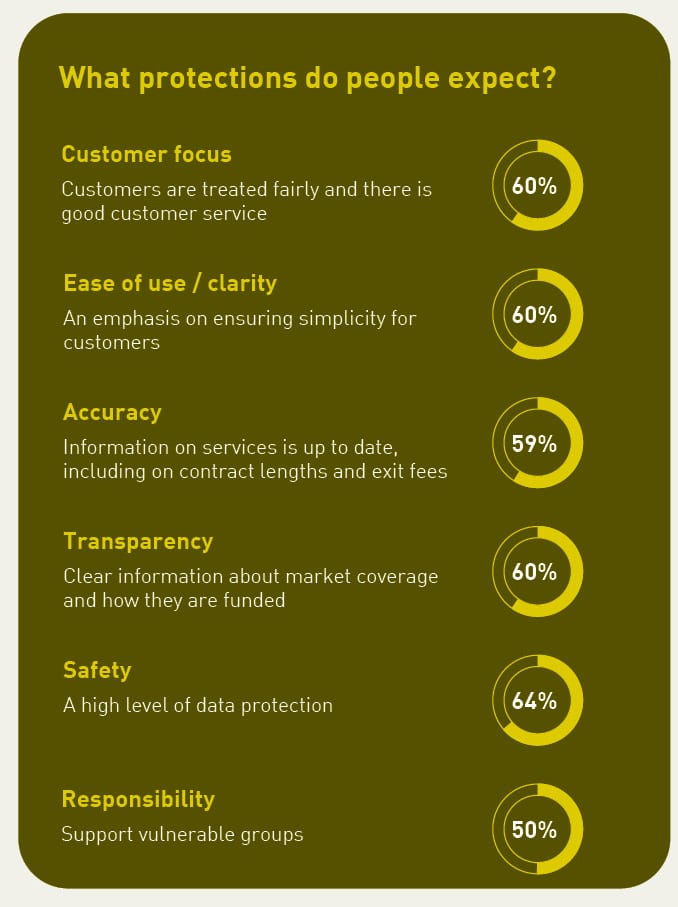 The report found that some autoswitchers were providing inaccurate or unclear information, making it difficult for consumers to make informed choices about using the service. Some sites even listed suppliers that were no longer in business.

It added that fewer than 15 out of around 70 energy suppliers are being offered by some autoswitching services claiming to cover the entire market.

Other issues highlighted by the charity were:

• Autoswitchers failing to cancel a switch, leaving customers stuck with a supplier they are unhappy with or facing exit fees 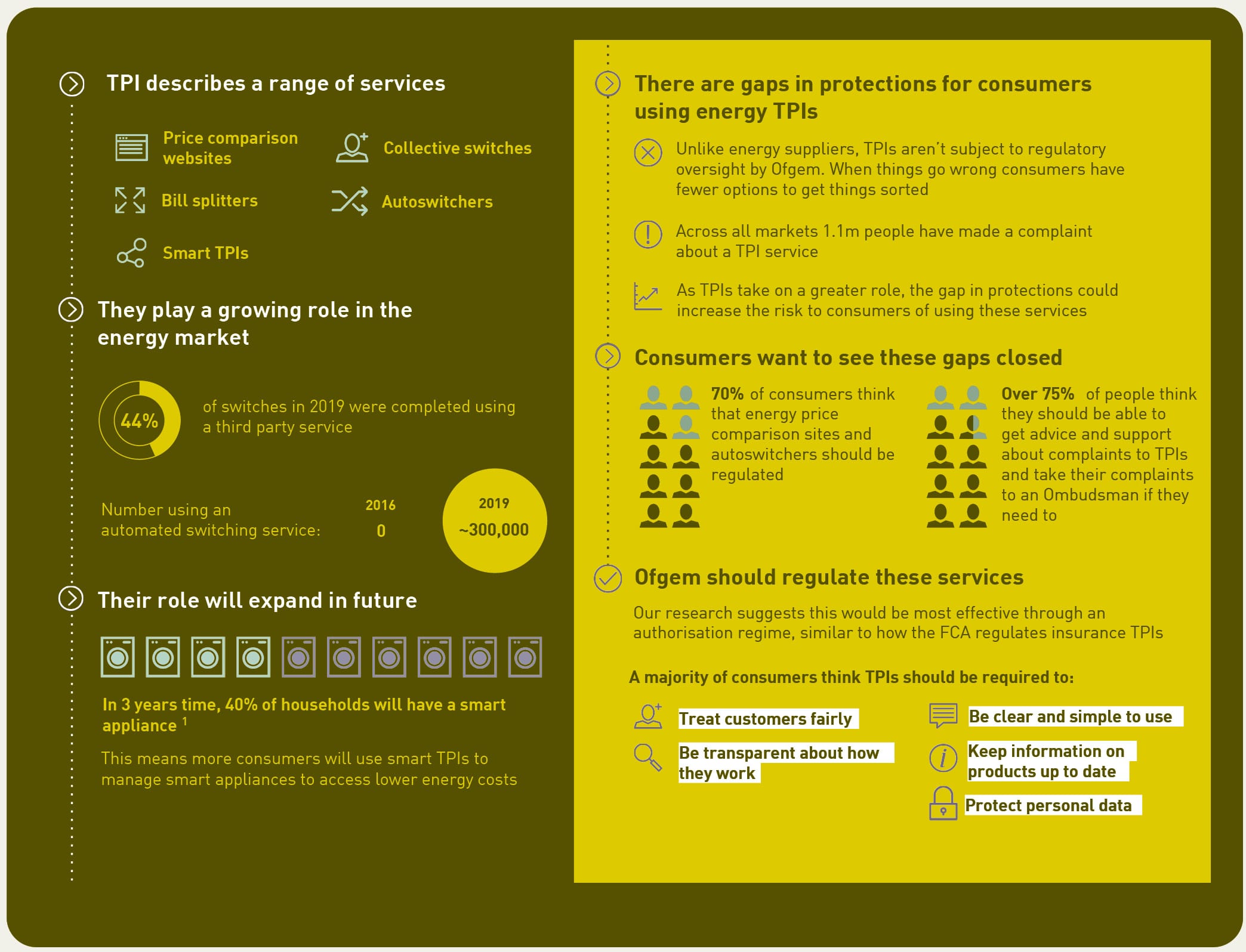