Jackson outlined the proposals in a blog published in the wake of Black Lives Matter protests following the death of George Floyd in the US. He also revealed the supplier had set aside more than £100,000 to fund a secondment to an anti-racist organisation.

Speaking to Utility Week, Jackson explained how the company was moving away from using CVs in recruitment by using standardised application forms for each role, with candidates only being referred to by a number as opposed to their name. This, he said, screens applicants on their abilities alone and removes the danger of unconscious bias. 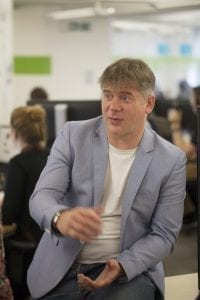 He said: “A CV carries a  lot of information about someone which sometimes is to the disadvantage of people from less privileged backgrounds. First of all you have got a name on it which will very often give you a hint as to ethnicity and gender.

Furthermore, Jackson revealed how staff in his operations team had been undertaking unconscious bias training.

“On a case by case basis you may not spot it. This is helping people in the company learn where their own behaviours, despite the fact that they are not consciously racist, biased or sexist in any way, can be a barrier to building a diverse organisation of talented people. We have been running it in our operations team and it has been working well so we will be expanding it wider.”

The Octopus chief’s blog said that while 13 per cent of the company’s middle and senior leaders identify as BAME (compared to 14 per cent of the population), diversity is not evenly distributed across the business.

“We’ll ensure that we take steps to close gaps”, Jackson said, adding, “We pride ourselves on our progressive nature – on building a company that is better for the world, that champions social justice and creates better careers and internal community. But I hugely welcome the voices which tell me where we’ve got things wrong. Thank you to those who’ve shone a light on these things.”

Jackson highlighted how the company did not want tokenism and targets, that it instead employed people on the basis of merit.

He continued: “At a recent ‘new joiners’  training session, two people of colour in the group remarked that this was the first time they’d got a job where they were sure it was because of how great they were – not to tick a box. They were right, and it must always stay that way. So we need to make sure our recruitment reaches into all communities and works for all great candidates.”

The company has also launched its own Black Lives Matter fund to sponsor at least one employee to be seconded to an anti-racism organisation and the company has initially raised more than £100,000.

“They will bring their own talent and training to bear in a truly meaningful way, and will also have access to Octopus skills and resources to drive change and share learnings back with Octopus”, Jackson said.

As well as the initial funding, any employee can donate or raise money and the company will match every pound raised or donated.

In his blog, Jackson said that following the death of George Floyd, Octopus’ employees have said they believed the company should act.

He added: “So many voices speak up at these times, but fade without lasting effect.

“We’ve listened really hard – to the comments in our internal #BlackLivesMatter Slack (communication) channel but also to many other people who have approached me and many others directly with thoughts. And let’s be clear – it has been hard maintaining my own silence publicly so I could hear what people think, without crowding out views with my own. But I am white and I needed to hear your voices.

“As a company, our DNA is that we do things that will actually enable and drive meaningful change. We invest in what we believe in, and where the topic is so critically important, we need to be more confident than ever in sticking to that DNA even when our lack of statement starts to be painful.”

In addition to the initial funding, any employee can donate or raise money and Octopus will match every pound raised or donated. Jackson has already donated £54,486 from interest he received from early loans made to the company. With Octopus matching donations, the fund stands at £108,972.