The chief executive of Eon UK kicks off our Q&As with industry leaders as we ask where are the quick wins that could help a green recovery and support the industry to Build Back Better. 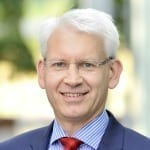 Where do you think the quick wins can come from in creating green jobs to boost the economy? And what are the scale of jobs we’re talking about here?

Unlike single large infrastructure projects, decentralised infrastructure, such as upgrading buildings, creates significantly more jobs for businesses across all regions of the UK. The Green Finance Institute forecast that a comprehensive energy efficiency programme to renovate all homes to EPC C by 2030 could support 150,000 jobs across all regions of the UK, with up to 40,000 jobs in the first two years.

The important thing to note is that these supply chains are ready to go now. We would see tangible benefits to the UK economy this year, and much of the supply chain is associated with the construction industry – one of the hardest hit by the pandemic with a 16.5% drop in employment (according to the Institute for Social and Economic Research) – and would support many small businesses across Britain. They just need the certainty of demand a Government announcement would bring to help them retain employment and unfurlough employees more quickly.

We know the policy mechanisms deliver. Over the past 12 years Eon has installed more than 1.3 million energy efficiency measures; we know the supply chain, know the technologies and already have the mechanisms to deliver. If Government can expand on existing mechanisms they can remove any fear that enacting such policies will not deliver on their promises.

Zero interest loans and tax incentives for homes and businesses, and new regulations to tighten energy performance standards for landlords could unlock £5 of private investment for every £1 spent.

Would the jobs be created regionally – or evenly distributed?

One of the key benefits of a focus on decentralised infrastructure, whether it is smart meters, energy efficiency measures or heat pumps being installed (or all three), is that it inevitably benefits all regions of the country; particularly when you compare it to single large infrastructure projects situated in one area alone.

Existing energy efficiency programmes – that we know deliver – give the opportunity to target benefits in regions that need improvement the most. For example, we know that the North West has the highest proportion of fuel poor households in England based on the most recent statistics for 2018, 12.1 per cent, compared to 7.9 per cent in the South East, whilst the West Midlands had the highest fuel poverty gap of £433 (Fuel Poverty Statistics for England 2018). The UKRI’s Healthy Ageing programme could be expanded with priority focus given to areas most in need. Eon is already using this programme to deliver whole house solutions to 31,000 homes across five Midlands counties as part of a trailblazer project.

Blackpool currently has an unemployment rate of 11 per cent, almost three times the national average of 3.9 per cent. The city also has some of the UK’s most energy inefficient homes, with a staggering 75 per cent of homes EPC D or below, meaning bills can be £500 a year more expensive than those in homes with an EPC A/B rating. Government investment in energy efficiency could drastically improve the state of Blackpool’s housing stock, creating hundreds of jobs in the area and stimulating spending on local goods and services.

In Bolsover, 24 per cent of the local workforce is employed in skilled trades, the highest in the country. However, 73 per cent of its homes are rated EPC D or lower. As demand for skilled workers such as plumbers, window fitters and roofers falls due to disruption from the pandemic, investment in energy efficiency could generate new types of building projects, rapidly putting tradespeople back to work.

What would need to happen to make this possible? (i.e. change of policy? pledge of government money? more training?)

The £2.5 billion of Home Upgrade Grants committed to by this Government should be doubled and front-loaded to provide an additional £1 billion per annum to improve the energy efficiency of vulnerable customers, and complemented with zero interest loans and tax incentives for homes and businesses and more effective rules for landlords.

VAT, business rates and carbon taxes have distorted markets and undermined the push to a low carbon future. In developing a Green Economic Recovery package, it is important that all levers of Government are pushing in the same direction.

From 1 January 2021, when the UK leaves the transitional arrangements with the EU, VAT should be charged at a zero rate for all low carbon investments. Business rates should be urgently reformed so that business investments associated with lowering carbon emissions are incentivised, rather than penalised as they currently are.

The Spring Budget made a good start and we welcomed the replacement of the Renewable Heat Incentive with a new low carbon heat grant scheme. However, to deliver a step change in approach, a Green Economic Recovery should increase the amount of allocated funding to drive the uptake of heat pumps to £500 million per annum. This could support the installation of up to 125,000 heat pumps in year one based on a £4,000 grant which, when combined with changes to new build housing standards, would create volume certainty to which UK manufacturers could respond.  Government can also play a role in helping support the re-training of heating engineers for the roll-out programme.

Under all credible scenarios, heat networks will also play a major role in our future heating system contributing up to 20 per cent of heat demand. We support the introduction of a new heat networks regulatory framework to provide confidence to customers and investors alongside the Spring Budget’s £270 million Green Heat Network Fund. We also need the Government to pass new legislation before the end of this year associated with driving up new house building standards through to 2025 when a ban on new gas connections comes in, providing certainty on the future rules for all stakeholders.

A clear phase-out date must also be set for new gas boilers, no later than 2035. To support the transition from gas, the risk should be under-written by Government to enable commercial banks to offer zero interest loans to households and businesses.

What might be the complications?
The way we heat our homes has not changed for a generation, with the dominant fuel being increasingly imported gas. We need to transition to a lower carbon heating system. Offshore wind showed how a sector deal can drive outcomes which benefit the consumer in terms of lower costs and UK supply chain opportunities. We should now replicate this approach in low carbon heating, using the huge potential for cost reduction in heat pump manufacturing, and exploiting the considerable opportunities for low carbon heating equipment to be produced in the UK.

Upgrading this country’s homes and buildings is the best possible policy for a green economic recovery for Britain, delivering more jobs, more economic stimulus, more quickly with more tangible impacts, including better health and wellbeing for more people across the country than any other single policy or project.

Build Back Better is a major new series of analysis, interviews, case studies and digital events from Utility Week exploring how the sector can drive the post-Covid recovery and build a greener and fairer society