Smart Energy GB consulted Populus in order to better understand the impact of smart meter ownership on energy consumer behaviour. The evidence supports the view that a smarter, energy-savvy consumer is emerging as a result of the national smart meter roll-out.

The UK government wants energy suppliers to install smart meters in every home in England, Wales and Scotland. The Department for Business, Energy & Industrial Strategy (BEIS) is leading and monitoring the rollout.

The energy suppliers responsible for supplying and fitting smart meters need to abide by the rules and regulations set out in the Code of Practice (SMICOP), including making sure people know how smart meters work, how to control their data and that the smart meters they supply meet government standards – the Smart Metering Technical Standards (SMETS).

Smart Energy GB is responsible for ensuring that households and microbusinesses across Great Britain understand smart meters, the national roll-out and how to use their new meters to get their gas and electricity under control. A key challenge facing Smart Energy GB lies in evidencing the long-term impact of smart meter ownership on consumer behaviour change.

The national roll-out of smart meters is the biggest change to the UK’s outdated energy infrastructure in decades and has not been without significant challenges.

The challenges have been exacerbated by media reports which have repeatedly thrown doubt over the government’s aim of installing a smart meter in every home in Britain by 2020 and have called the likely savings into question.

Smart Energy GB takes its responsibility very seriously, and therefore requires a solid understanding of the real impact of smart meter ownership following installation. Smart meters come with in-home display units (IHD) that show in near real-time information in energy use, in pounds and pence, giving consumers more visibility on their energy consumption. Smart Energy GB needs to understand the impact that the increased visibility on energy consumption has on consumer behaviours, in order to continue to deliver accurate, up-to-date and reliable information about the roll-out.

Smart Energy GB consulted Populus to conduct research to understand the full impact of smart meter ownership on energy usage behaviour in order to gain a comprehensive view on the roll-out.

While knowledge of energy use is already high among the general population (just under two thirds (64%) of non smart meter owners say they understand how much energy they use around the home), this rises to 84% once a smart meter is installed in the home. 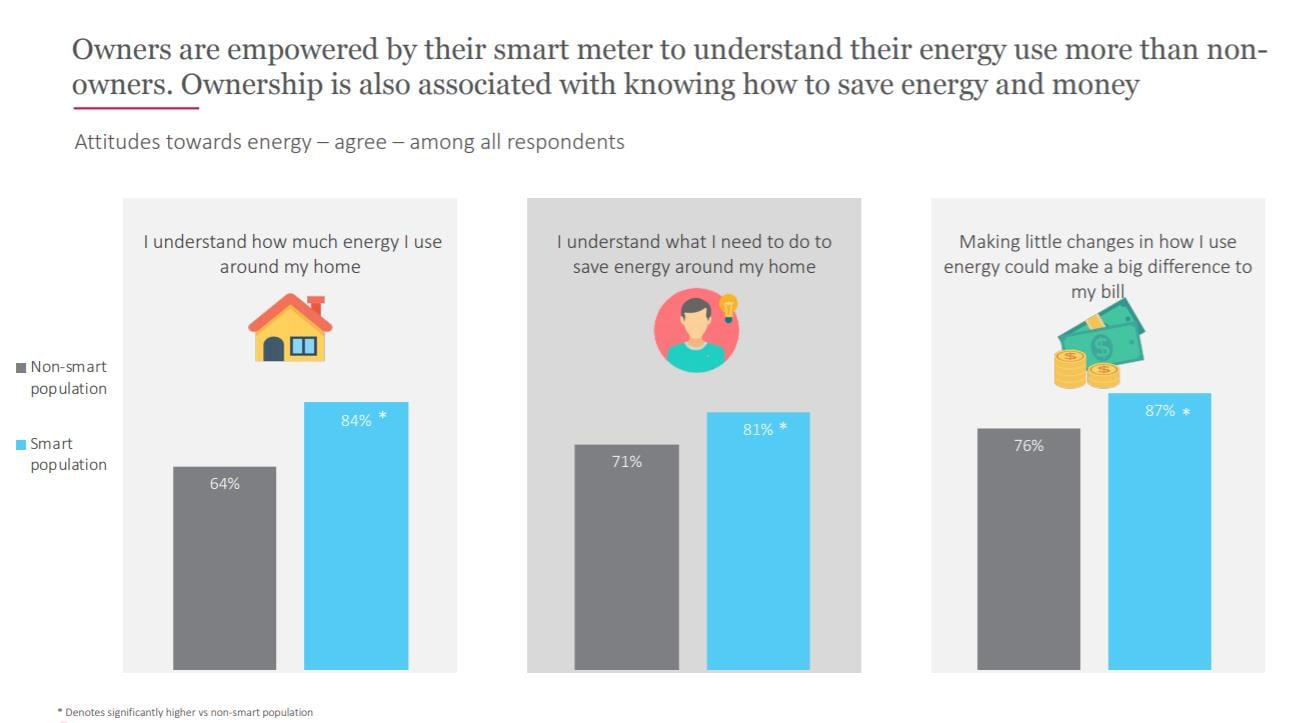 The Outlook survey conducted by Populus shows that smart meter ownership leads to increased energy saving attitudes and behaviours. Furthermore, they are sharing their experience with those around them. More than 7 in 10 (71%) of people with a smart meter would recommend one to friends, family or neighbours. One in three (33%) of people with smart meters are now starting discussions to encourage others in their household to use less energy.

But the research shows that smart meter ownership directly translates into actual behavioural change. Populus’s energy usage tracker shows that two thirds (66%) of smart meter owners report always keeping track of the amount of energy they use around the home. This drops to less than half (47%) for those without a smart meter.

Smart meter owners who have had their smart meters for longer are also more likely to have purchased energy efficient appliances. 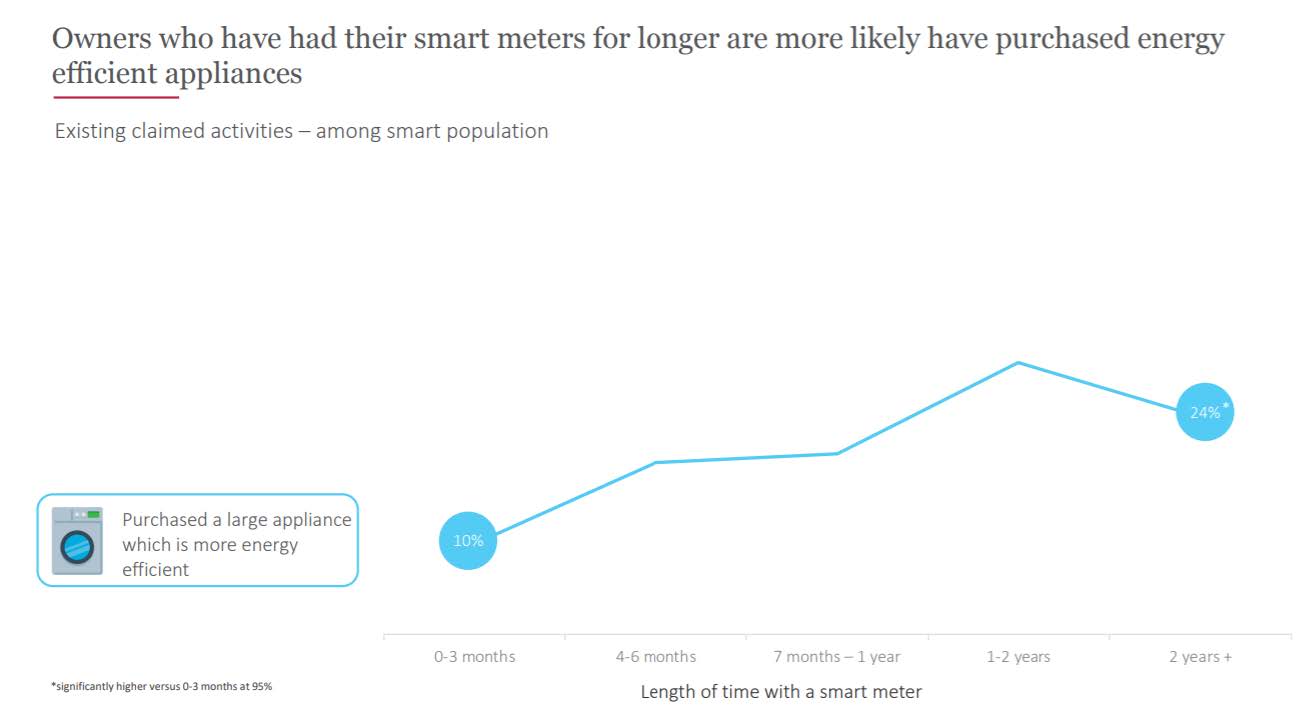 Furthermore, length of time of smart meter ownership is associated with an increased number of changes made around the home including fitting energy efficient lighting, installation and an energy efficient boiler. 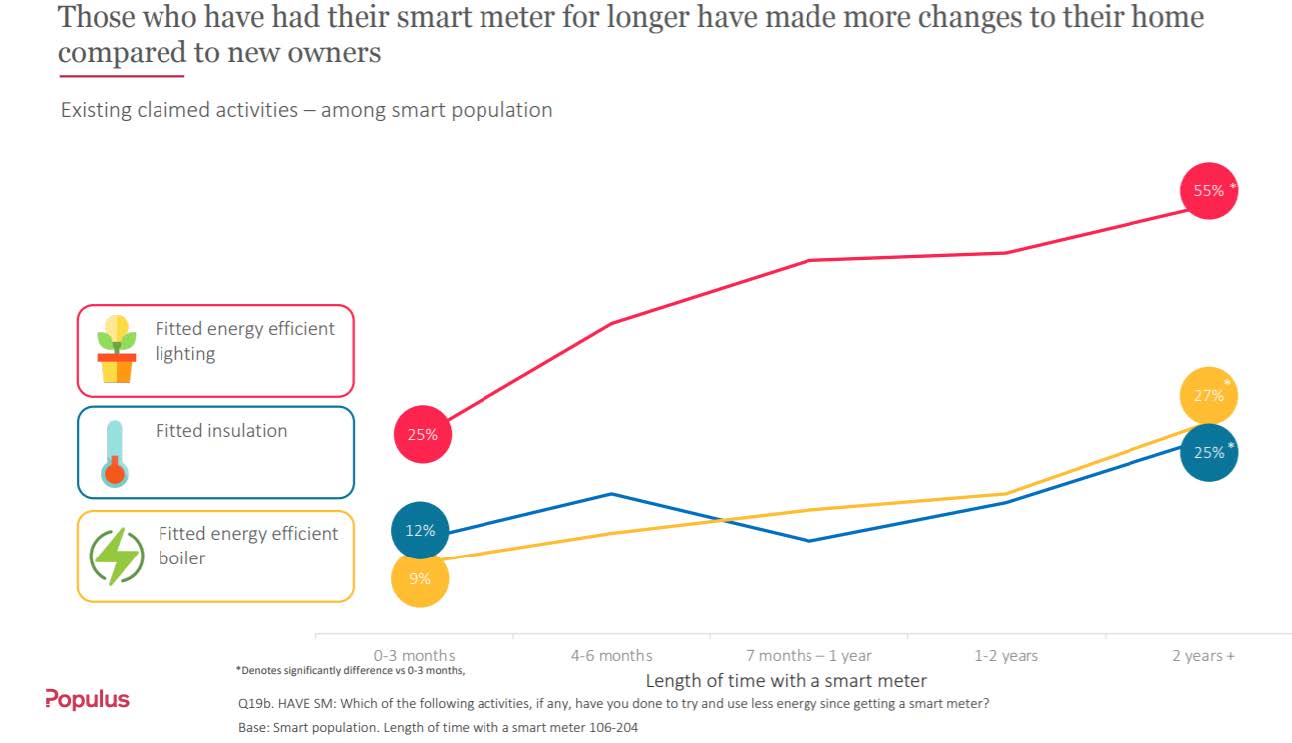 3. Smart meter ownership is associated with reduced anxiety about energy

The evidence supports the view that with the increased knowledge of energy expenditure that comes with smart meter ownership, comes reduced consumer anxiety around energy bills.

With the smart meter rollout fully underway and the number of smart meter owners set to increase, it is imperative that providers gain insight into how smart meter ownership impacts consumer behaviour. Young people are most likely to say they would like to upgrade to a smart meter soon, with appetite amongst those aged 21-34 above that of the general population by 12% points. These are the energy consumers of the future.

The national rollout is here, and it is happening now. Energy providers that understand, embrace and adapt to changing consumer attitudes and behaviours, are the ones that will succeed in future.

Smart Energy Outlook, the largest independent survey of national public opinion of almost 10,000 people in Great Britain was carried out between 17 – 30 May 2018 and is accessible online here https://www.smartenergygb.org/en/resources/press-centre?tab=4
Populus’s energy usage tracker carried out on 25 May – 11 June 2018 behalf of Smart Energy GB is available to download here: https://www.smartenergygb.org/en/resources/press-centre?tab=4