The numbers of utility customers experiencing problems with their providers are at their highest level since 2010, new research has revealed.

As a bi-annual poll, the UK Customer Satisfaction Index (UKCSI), produced by the Institute of Customer Service, surveys 10,000 consumers and tracks the effects of service on business performance across 13 sectors.

Published today (7 July) the latest survey ranked the utilities sector as 12th overall, with a UKCSI score of 73.5 (up 0.9 points on last year), with transport taking last place with a score of 71.5.

That said, more than 16 per cent of consumers have experienced problems with a utility company’s customer service, which is the highest level since January 2010.

Quality or reliability of products and services was found to be the leading cause of issues (28.4 per cent), which is an increase of more than five percentage points compared to last July.

Water remains ahead of energy in terms of satisfaction and scored 74.6 overall, a slight improvement on last year. Meanwhile the average satisfaction for energy companies increased by 1.4 points to 73.1. 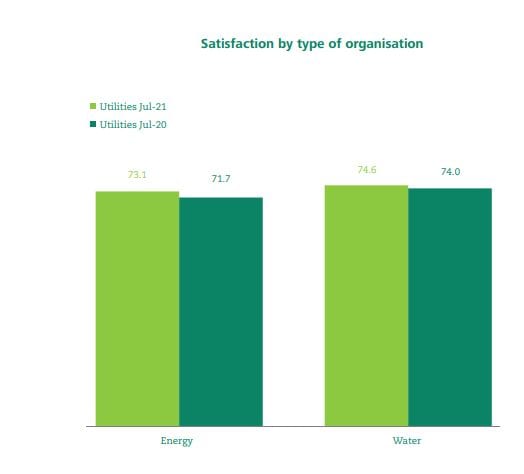 Overall, UK Power Networks (UKPN) and Northern Ireland Water had the highest percentage of customers experiencing a problem in the last three months (33 per cent).

UKPN however received a satisfaction score for complaint handling of 8.1, the highest in the sector where the average was 5.5. Additionally, the network had the third highest net promoter score (32).

During the past 12 months there has been a rise in the use of digital services – while website is the most popular channel  (39.2 per cent), email saw an increase of four percentage points to 17.5 per cent.

Average satisfaction is lower than the UK average for experiences in each of the main channels except for email.

Scottish Water has a UKCSI score of 83.5 which is an increase of 6.2 points compared to last July. Octopus and Welsh Water are the second and third highest rated organisations in the sector, scoring 83.1 and 79.5 respectively.

The report further outlines three leading issues which customers believe the sector should improve: making it easier to contact the right person to help, website navigation and billing.

Jo Causon, chief executive at the Institute of Customer Service, said: “Utilities are essential in our day to day lives. Whilst we have seen improvements in complaint handling, it is evident that too many providers are failing to get to grips with the root causes of their customer service issues.

“Customer satisfaction is intrinsically linked to strong business performance. For the UK economy to move forward as a true service leader, we need a broader focus on all dimensions of the customer experience.”

She added: “The past year has transformed the customer experience landscape. As attitudes, behaviours and preferences continue to evolve, it’s more important than ever for utility brands to communicate effectively with their customers; blending the best elements of digital and human experiences to engage with a diverse customer base.

“Those providers that have performed best in the UKCSI are those that have maintained a key focus on the whole customer experience journey – providing honest, genuine communication via a range of channels.”