The EV Energy Taskforce, which brings together energy and automotive industries, has been asked to reconvene to help overcome obstacles to the rollout of electric vehicles.

The Taskforce was originally announced as a part of the government’s ‘Road to Zero’ strategy to plan for the changes that will take place as a result of rising electric vehicle use. Its work culminated in a wide-ranging report in published in January 2020. 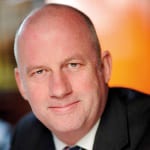 Chair Philip New (pictured), said that the Office of Low Emission Vehicles had asked him to reconvene the group to help drive through changes that are needed to ready the UK for the transition to low-carbon transport.

“We’ll continue to draw together the multiple actors in the space to be a sort of clearing house to connect people and provide coherent feedback to policy makers and government about the progress of the different sectors,” he explained.

“Our role is also to provide an independent view of how proposals in the original report is being actioned – and, where they are not progressing, set out actions – so in essence monitoring what is going on.”

ban on petrol and diesel cars to 2030, from 2035, which was the timescale called for by a number of large energy companies, including SSE, Centrica and Scottish Power.

The report called for smart charging to the default for EV users connecting at home from next year as one of its 21 recommendations, which also called on the government and Ofgem to support the development of a new co-ordinated and accessible market for flexibility, aimed at EV drivers, by 2023 at the latest.

New said: “It definitely feels like the government response has been positive since the report was launched and there’s a lot of good work underway.”

New pointed to the development of British Standards for smart appliances, including smart chargers as well as the work of the Energy Data Task Force on handling and sharing data “which crosses into our recommendations.”

The sales of electric cars are rising. By September, EVs accounted for 6.7 per cent (66,611) of all cars registered in the year-to-date. That is up from just 2.2 per cent during the same period in 2019.

The Taskforce will report on how its proposals can be turned into action at an event on Thursday (22 October).

You can read more from Philip New and the ambitions and barriers to EV infrastructure rollout in Utility Week’s Green Recovery Report, produced in association with Addleshaw Goddard