Gas networks in Great Britain have released a joint plan for their conversion to deliver hydrogen over the coming years.

The roadmap includes proposals to begin blending hydrogen into the gas grid at rates of up 20 per cent from 2023, create the first hydrogen neighbourhood by 2025 and the first hydrogen village and then town by the end of the decade, supported by 5GW of production capacity.

The Hydrogen Networks Plan has been published the Energy Networks Association (ENA) as part of its Gas Goes Green initiative.

The head of the programme, former Cadent chief executive Chris Train, said: “Building the UK’s first hydrogen town is not just about replacing the natural gas that most of our homes rely upon today; it’s about reducing our carbon emissions in a safe and secure way.

“It’s about delivering meaningful choice for households, businesses and communities. And it’s about ensuring that the economic benefits of hydrogen are spread around the country, to take advantage of the breadth and scale of that transformation.

“Britain’s Hydrogen Network Plan sets out how our gas network companies will do all of that in the years ahead.” 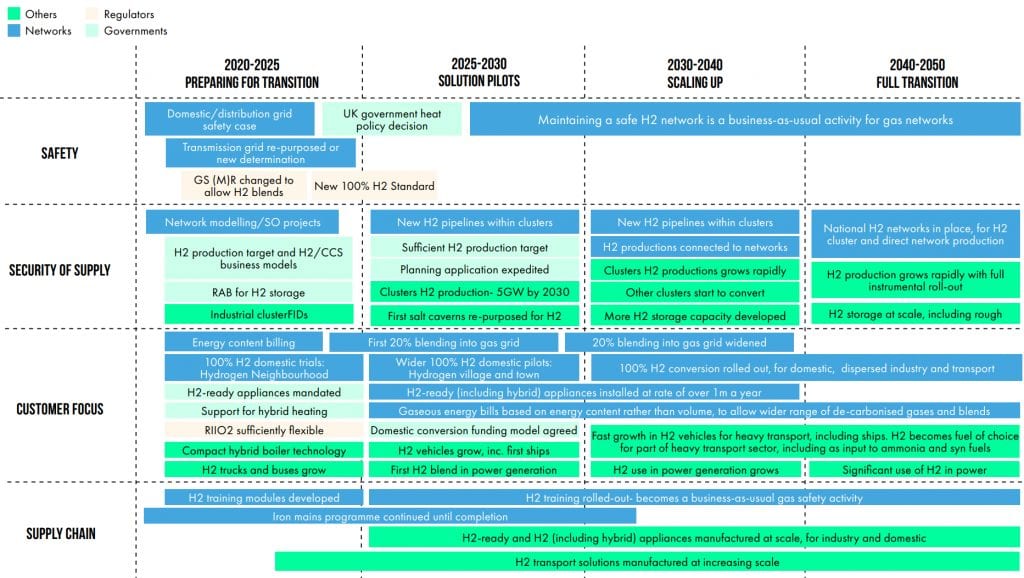 Speaking to Utility Week, ENA head of gas Matt Hindle said the success of the plan will be contingent on the right policy and regulatory support and expressed cautious support for the RIIO2 final determinations issued by Ofgem in December.

“Fundamentally, we think that the suite of mechanisms for decarbonisation that are set out in the final determinations can support the activity set out in the plan, but we’re clearly still waiting for some of the final decisions/guidance around how those mechanisms will work in practice, how they’ll interact with each other and flexibility is really important.

“We’ve seen that in the development of the evidence that is underneath the hydrogen networks plan through RIIO1 where the flexibility on the Network Innovation Allowance has let us be really responsive as the evidence has developed to make sure it’s as comprehensive as possible; that we can fill gaps in evidence.

“That will continue to be important as we build through RIIO2 and as we continue to respond to changes in policy as well; making sure that we can respond quickly as government’s view on delivery of net zero frees up.”

He said: “To take forward some of the underpinning work, we clearly need to make sure we don’t have any hiatus in the decision-making or support for those projects. We need to make sure that those mechanisms are in place quickly if we’re going to meet the ambitions the government has set out for the 2020s.”

Hindle also urged the government to follow through on its pledge to support the creation of multiple low-carbon and zero-carbon industrial clusters around Britain over the next decade.

“What I think is really important is that we continue to develop options around all of the key clusters because if the government takes forward those that they’ve committed to – two by 2025 and four by 2030 – the early stage and front-end work that will go into assessing the viability of those clusters and developing those options won’t go to waste because we know that to meet net zero, we need to decarbonise all of the clusters eventually.”