The application window for the fourth Contracts for Difference (CfD) allocation round - the largest to date - opened on Monday (13 December). Utility Week speaks to Aurora Energy Research associate Edward Pizzey about how the auctions are likely to play out given the parameters set out by the government in its final budget notice.

The window has now opened for applications to the fourth Contracts for Difference allocation round.

For the first time in more than half a decade, the auctions are open to onshore wind and solar. The last time these “more-established” pot 1 technologies were able to bid was in the first competitive allocation round back in 2015.

Following the subsequent closure to new entrants of the Renewables Obligation across 2016 and 2017 and then the Feed-in Tariff in 2019, the only onshore wind and solar projects that have been able to proceed in recent years are those that have been able to build an investment case on merchant revenues alone.

As a result, deployments have “tailed off completely,” says Edward Pizzey, associate at Aurora Energy Research. “The funny thing is they phased out those subsidies just at the wrong time. It’s a bit unfortunate really. Solar and wind weren’t quite ready. They weren’t fully fledged. The costs hadn’t come down quite enough for them to go fully merchant.”

In its final budget notice for the fourth allocation round towards the end of last month, the Department for Business, Energy and Industrial Strategy confirmed that the budget for the pot 1 auction – the maximum value of estimated annual top-up payments to generators that secure agreements – will be £10 million.

Although this may not seem like a lot at first glance, this could stretch a long way – theoretically to infinity if applicants bid at strike prices at or below their respective reference prices for what they will be able to able to capture on wholesale markets. It is for this reason that ministers have also imposed a hard capacity cap of 5GW, with individual caps of 3.5GW each for onshore wind and solar, to keep the auction competitive. 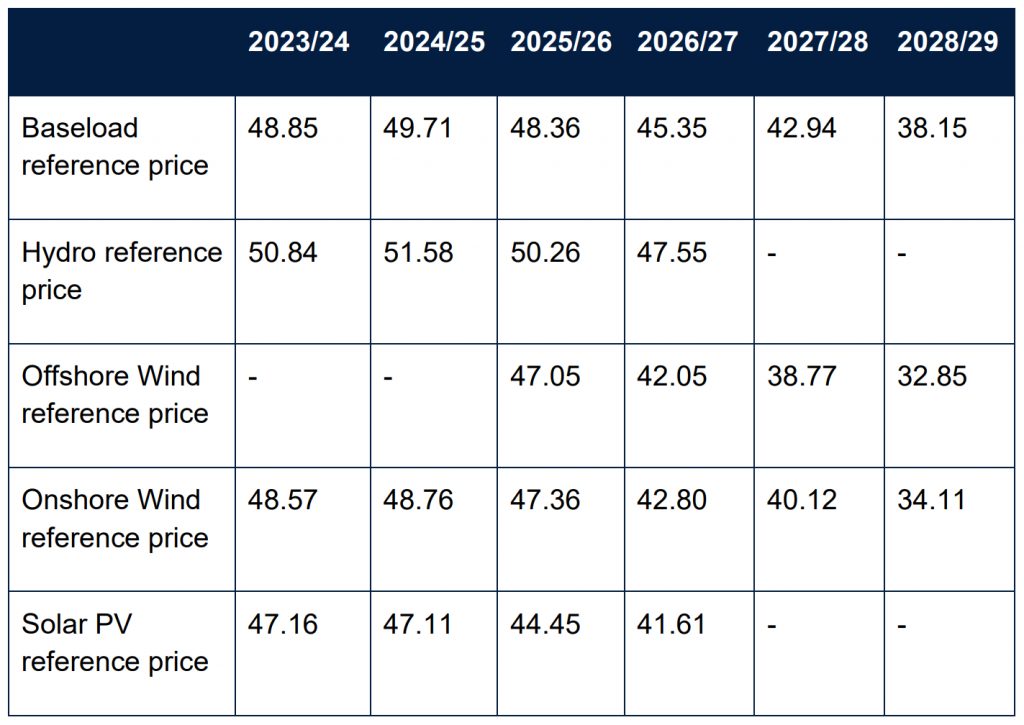 Whilst other technologies – hydro, landfill and sewage gas, and energy-from-waste with combined heat and power (CHP) – will also be able to bid, Pizzey expects this auction to be “dominated” by onshore wind and solar.

“I think at Aurora we expect quite a decent amount to come through from those technologies and very little from the other technologies, because I just don’t think they’re cost competitive with solar and offshore wind,” he explains.

He says there’s certainly enough in the development pipeline for them to reach the 5GW cap.

“A month or two ago when we had a quick look who was eligible, regardless of whether they’d already announced they were going to go merchant, there was close to 7.5GW onshore wind, solar and other stuff in that pot 1 that had planning permission, with another 7.5GW that was planning pending – they could get planning permission in time – although most of that won’t.”

“About 8GW of solar and onshore wind could be eligible for this auction,” he summarises.

Pizzey says it’s safe to assume they will get very close to the overall cap: “I think that’s the government’s assumption as well given that they’ve only allocated a small budget to that pot.”

When asked whether either onshore wind or solar will reach their individual cap, he responds: “If it’s going to be one, I’d say it’s more likely to be solar but I’m not sure if either of them will max out. Maybe it’ll just be a bit more solar than onshore wind.”

Pizzey says the 5GW cap is “a lot more” than anyone in the industry was originally expecting to get from the auction: “At the beginning of last year, I guess they were just happy they were going to be allocated something. We were all assuming there was going to be a lot more offshore wind in the pipeline.”

“I think over the year the government realised that probably wasn’t going to happen and there wasn’t going to be a giant influx of offshore wind projects coming through to make that pot 3 competitive so they upped what pot 1 was. I imagine they had it pegged at a lower capacity before.

“People could argue that it should be higher because there’s a big pipeline for those technologies but they want to keep it cost competitive and their focus still is on offshore wind because they see that as the greatest value add for the country.”

He notes that allocations will quickly mount up if the government continues to hold similarly sized auctions on a regular basis.

Pizzey says a lot of developers will see the auction as “free punt” as the thresholds for entry and penalties for pulling out are so low.

For the same reason, he has concerns that some developers may enter bids they are unwilling follow through on, hoping that they get accepted but the auction clears at a higher strike price: “There is quite a big risk. It’s not great if that happens going forward. If loads of people enter and then say that’s cleared lower than I thought it was going to clear and actually I’ve decided I don’t quite fancy that price.”

Although the budget is significantly higher than for pot 1, the auction is likely to procure a lot less capacity given that the technologies are less mature and therefore more expensive. “It hasn’t got a capacity cap that pot but I can’t see much coming through – less than a 1GW,” says Pizzey.

The budget includes minima of £24 million and £20 million for floating offshore wind and tidal stream projects – ring-fenced subsidies to which they will have preferential access, with tidal stream going first.

Following sustained pressure from the emerging industry and its supporters, the tidal stream funding was announced shortly before the final budget notice and is additional to the budget announced in the draft notice in September, raising the overall total from £265 million to £285 million.

In the case of floating wind, Pizzey says: “The pipeline is not massive – it’s just a few little projects – so I imagine that they will secure some floating wind but it won’t be a huge amount of capacity obviously.”

He says the remaining budget once tidal stream and floating wind have each taken their shot is likely to go to primarily remote islands wind: “The most competitive technology is remote island wind so that’s likely to secure what budget there is left.” 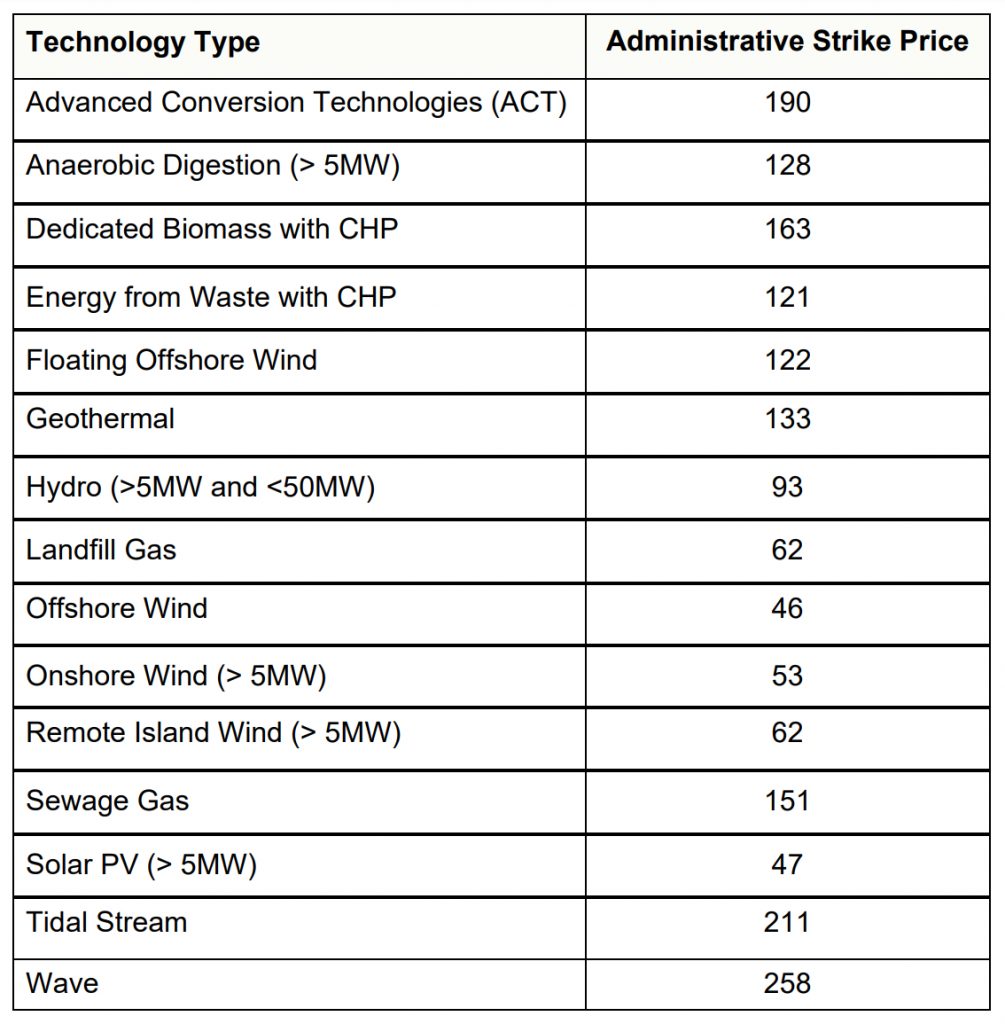 For the fourth allocation round, there will for the first time be a third separate pot dedicated to offshore wind.

Explaining its reasoning back in March of last year, the government said offshore wind is not yet mature enough to compete against onshore wind and solar but is cheap enough that it would leave nothing but scraps for other developing technologies if left in pot 2.

The pot 3 auction will have by far the largest budget of the three at £200 million.

Pizzey says the development pipeline for offshore wind is much more transparent than for other technologies: “Everyone can see who’s got planning permission and who’s still in the waiting line. Most of the stuff that’s got planning permission already is the stuff that failed last time around – so Inch Cape, Moray West and East Anglia Three that lost out in round three.

“The only additional project that’s got planning permissions since then is Hornsea Three so pipeline’s looking fairly thin on the ground for a competitive auction.”

He says the auction could also include the portion of the Seagreen project, which has already secured a PPA but did not secure agreement in the last allocation round.

Taken together, these projects would have a capacity of around 6.3GW and Pizzey says they would only need to bid slightly lower the strike prices for offshore wind in the last auction of around £40/MWh (2012 prices) to all secure contracts.

“What I have heard is maybe a few of those projects are looking to split between part of their capacity of going into the auction and some of it not – so what we saw last time with Seagreen.”

He says this would allow them to “expose themselves to a bit of the merchant upside.”

Pizzey says there are other projects in planning but it seems unlikely they will make it through by the time application window closes on 14 January: “Potentially there’s up to 12GW if you include all the stuff that’s in planning but it’s just not looking likely.”

“It’s not looking too competitive, the auction for pot 3, right now – not as competitive as the government would have liked,” he remarks.