Prof Dieter Helm, the author of the Cost of Energy Review, talks to Utility Week about his radical ideas on how to rip up the current system of governance across the utilities sector, and why decarbonisation has made this essential. He explains why he expects the energy white paper to “pave the way” for the recommendations of his review and his view that the current price controls will be the sector’s last.

“If you look at the criticisms that have appeared in Utility Week over the years to my proposals, it’s a catalogue of vested interests. A lot of companies are very worried about what I’ve suggested. But they can’t ignore the fact that the overall model has run its course. It’s over.” 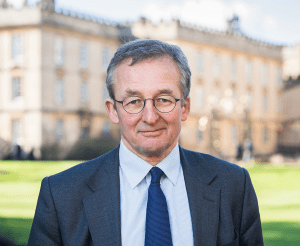 Professor Dieter Helm, CBE, the author of the Cost of Energy review and persistent critic of the current structure of the utilities sector, believes opinion is mounting on his side of the argument.

The upcoming energy white paper, he says, will “pave the way” for many of the recommendations in his review, which has been gathering dust for more than two years now. Chief among them is his insistence that the electricity system operator should be nationalised and a series of regional system operators introduced.

Helm also believes Ofwat’s handling of the latest price control process for the water sector, along with lingering suspicion fostered by the nationalisation debate, has shown up failings in this industry. Again, he believes a systems regulation model is the answer – proposing the creation of a series of catchment system operators (CSOs) based on the original regional authority areas.

He argues that the net-zero journey highlights how unfit for purpose the current system is and suggests that a form of nationalisation will occur quite naturally across the sector as the financing landscape changes.

We meet in the tranquil setting of his Oxford chambers, where Helm discusses his absolute conviction that the new government will see the sense of his radical ideas. If he is right, what does this mean for the utilities sector as we know it?

This is a question that was much discussed in the autumn of 2017 when Helm produced his review, which branded current policy, regulation and market design as “not fit for purpose”.

As well as the need for system operators, the review called for a unified equivalent firm power (EFP) auction to replace current mechanisms such as contracts for difference and the capacity market. Helm also argued for the merging of licences for generation, supply and distribution; universal carbon taxes across the economy and a border carbon price; and the scrapping of standard variable tariffs.

At the time there were criticisms that Helm had deviated fairly liberally from his initial brief and shoehorned in a number of his personal convictions about shaking up the sector.

However, he insists it all comes back to the customer and the burden they are expected to shoulder.

“The question of the prices that customers should pay across utilities is deeply political. And that’s because there are whole swathes of the population who just cannot afford to pay any more.

“So, how are you going to pay for net zero and the goals within the Environment Bill and everything else that needs to happen?”

Helm suggests socialising the cost of much of this investment – effectively taking it off consumer bills and into the government’s account.

He is confident that Boris Johnson’s administration will see the sense in this and that many of his ideas will feature in some shape or form in the energy white paper, expected at the end of this month. Helm expects that paper to just be the starting point for a series of big policy announcements around energy.

He says: “I think it will be a continual process – it will be like health under the Labour government, where we had a bill a year.”

Helm published a paper on the water sector at the end of last year, which posed the question as to whether 30 years on from privatisation, the English water sector is the envy of the world.

While the paper ostensibly challenges the model on metrics such as productivity and cost, it’s over-arching conclusion is that ownership doesn’t really matter.

He argues that the introduction of CSOs would be the best way to finally answer the ownership question. Under his model, CSOs would have responsibility for water, sewerage, flooding and water pollution. The incumbent water companies could bid alongside other organisations to provide some of these services. This, Helm says, would provide a “live experiment” as to whether private companies could outperform public bodies.

“The key feature of my model is that it actually maximises competition because, as with the system operator in electricity, you decide how much capacity you want and then you auction it.

“The lesson from electricity is that system operators running auctions produces really quite exciting results.”

With the introduction of system operators, Helm expects the current regulators to occupy a technical role in the interim period and eventually to “wither away”. He insists this is more a criticism of the way the market has evolved rather than the performance of the regulators.

He says: “These are very good regulators – they are conscious of the politics around them. There isn’t much in the statutes which tells Ofwat or Ofgem to put higher priority on social and environmental considerations – they decided it was appropriate.

“Ian Byatt (former director general of Ofwat) invented the concept of affordability and that wasn’t in his primary duties.”

However, Helm insists it is now time for a more substantial overhaul.

“The problem with looking after customers’ interests is, that’s not the only interest. There is also net zero, a rapidly dwindling amount of water, technological change and the demands of infrastructure.

“Thirty years of RPI+X has run its course. The next decade is about re-inventing and investing heavily in the core infrastructures.”

The latest price review in the water sector was described as the toughest yet and has resulted in an unprecedented number of companies referring their final determination to the Competition and Markets Authority (CMA).

However, Helm is unconvinced that the protestations from the sector were entirely genuine.

“You have this remarkable result that the regulator announces the final determination, and the three quoted companies go to almost record share price values. You might say it’s relief from the nationalisation threat going ahead, but I don’t think so. If you got the regulation right, then roughly the share price equals the market value because you’re supposed to capture these extraordinary efficiencies.

“I cannot recall, apart from the electricity distribution review in ’94, any periodic review where there’s been such a share price reaction. Investors clearly believe that this is a very soft outcome.

“Now, I don’t think it’s a soft outcome. The debate often focuses on the cost of capital but actually where the determination really clamps down is on the capex and the capital maintenance. I understand the water companies’ complaints there.”

Nationalisation by the back door

So, what does this all mean for the nationalisation debate? According to Helm, the subject is already pretty much academic, as much of the privatisation agenda has already been reversed.

He says the move towards social contracts and embedding decarbonisation in business plans is one example of the direction of travel.

“We already have several companies who have effectively abolished the dividend.

“Nothing in these models says it has to be public funding. Take the Thames Tideway. Why is the cost of capital so low? Because it’s underwritten by Thames’s RAB, which in turn is underwritten by the duty to finance function.

“When you analyse it properly, there’s actually very little here to show these are private companies at all and I don’t see that trend reversing.”

Helm thinks that 2020 will eventually be seen as “the year things started to shift” and that the influence of Ofgem and Ofwat will begin to wane.

He says: “I question whether there will be any more periodic reviews. I genuinely think these will be the last ones.”

He adds: “I want apartheid between what’s a public decision or what’s a private decision. But once you’ve got a system operator making those decisions, then Ofgem and Ofwat become small in comparison.

“I’d go further and have a single technical regulator. They will do cost of capital, they will do the efficiency studies. These are generic skills – we could save a lot of money in the administration, red tape and all that stuff by just having a single network technical body. It works in Northern Ireland, it works everywhere else. Nobody else replicates our model – there’s a reason for that.”

Helm is currently finalising his next book, directly tackling the net zero journey, which will be published in May.

By then we will have seen the detail of the white paper, and Helm is bullish that it will bear his hallmark.

“I have no doubt whatsoever that my model will be adopted. It’s just a case of whether it will be messily adopted. The danger is of this fuzzy area between the regulators, system operators and the auctions. It should be a clean break – just rebase. But politics rarely works like that.”

He knows that his ideas are likely to generate more criticism in these pages, but he is unperturbed. In fact he seems to revel in it.

“Let them lobby for what they want, but if anyone can tell me of a way we can more cheaply achieve security of supply and decarbonisation of the energy sector in a timely way, tell me what that model is.”