Will the introduction of market-wide half-hourly settlement unlock energy service innovation for the mass market? And are suppliers ready to support the nimble settlement processes it requires?

As the final countdown to the UN’s COP26 climate summit in Glasgow begins, the focus on net zero is ramping up against a backdrop of growing concern about our collective attempts to make drastic cuts to greenhouse gas emissions.

In June this year the UK became the first major economy in the world to pass laws to end its contribution to global warming by 2050, following recommendations by independent climate advisory body the Committee on Climate Change (IPCC).

The target requires the UK to bring all greenhouse gas emissions to net zero by 2050, compared with the previous target of at least 80% reduction from 1990 levels. However, the August publication of shock findings from the IPCC’s landmark scientific report was described by UN secretary general António Guterres as a “code red for humanity” after it warned that under all the emissions scenarios considered by scientists, both targets will be broken this century unless huge cuts in carbon take place.

To try and bridge the gap, it is increasingly acknowledged by policy, regulatory and industry leaders that we must go beyond legacy approaches to decarbonisation which have focused on driving down the emissions related to energy production.

While this effort must continue, it must also be matched with innovation in energy services, which will enable all consumers to run more energy-efficient homes, reduce their consumption and engage in the operation of a smart energy grid.

Energy regulator Ofgem has set out its intention to enable this wave of service innovation through a variety of market reforms, among which the move to mandatory market-wide half-hourly settlement (MHHS) of all domestic customer bills by autumn 2025 is pivotal.

The regulator has set out its belief that this market-wide settlement reform will create the right environment and incentives for retailers to “develop and offer new tariffs and innovations that encourage and enable more flexible use of energy, such as time-of-use tariffs, automation, vehicle to grid solutions and battery storage,” all of which will help the UK make inroads towards its 2050 carbon reduction target. As an additional fillip, Ofgem has also calculated that the introduction of MHHS could deliver as much as £4.5 billion in consumer benefits by 2045.

Rowan Hazell, senior analyst at Cornwall Insight, agrees that the change could be a watershed for the industry. “While there have been offerings to date with several time-of-use tariffs in the market, the onus is not there yet to encourage all suppliers to offer innovative products with mass-market appeal,” he tells Utility Week.

With the arrival of MHHS, this could change, with a new influx of consumption data accelerating to market more accessible and flexible tariffs which support energy system optimisation. But will MHHS really help to unlock these innovations in energy services? And are suppliers ready to handle the enormous growth in customer data and rapid settlement processes MHHS will entail?

These are the questions Utility Week – in association with Siemens – explores in a new report, Bringing Energy Service Innovation to the Masses.

Drawing on the views of industry leaders at organisations like Ovo Energy and EDF, as well as innovation authorities at Innovate UK, the report articulates a gamut of challenges which lie ahead for suppliers as they move towards the MHHS goal. It covers issues from IT and data readiness to consumer engagement and the scope for unintended consequence for vulnerable customers.

Notwithstanding these challenges, however, the report delivers a resounding acknowledgement of MHHS as “one of the most significant changes to the energy industry for decades.”

Says Denise Willis, senior manager for industry change at EDF: “It’s massively changing how our systems work, how much data’s going to be generated, and will result in new players, new processes, new systems – but it’s an essential part of the future modern energy system that we need, not only to deliver our decarbonisation and net-zero goals but also to deliver the types of products and services that customers will benefit from in the future.”

“It’s a real concern for us that we – as an industry – aren’t where we want to be in terms of smart meter rollout. It’s important we get this completed ahead of MHHS but with one million EVs forecast to hit UK roads by 2025, that’s almost too late.”

“It’s about understanding what kind of relationship customers want with energy suppliers – light touch or do they want us to be heavily involved and turning things on and off for them at certain times. It’s incumbent on us to understand from our customer base how they want us to support them.”

“The real challenge is setting a tariff that’s likely to change behaviours and that will vary according to different socioeconomic groups.”

“Behaviour change is really tricky unless you give it to people with a price attached.”

“If consumers will not accept a passive device [smart meter], then there will clearly be challenges in getting them to accept that an energy company will control when their EV is charged, or their dishwasher switched on.”

“As a starting point, current data processing infrastructures used by suppliers will need to be able to cope with the increased volume of data as sites are settled half-hourly.” 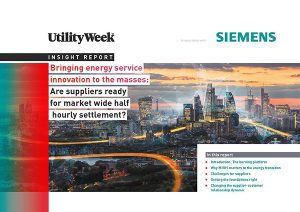