Several large energy suppliers have called on the government to shift policy costs from electricity bills and introduce a carbon tax to deliver its green heating ambitions.

The decarbonisation of heat is a crucial component of the UK’s climate change goals and in its 10-point plan released last year the government announced plans to install 600,000 heat pumps annually by 2028.

However, Public First’s report highlights how under the current framework many policy costs such as feed-in tariffs (FIT), renewable obligation certificates (ROCs) and contracts for difference (CfD) are imposed on electricity bills but not on gas.

As a result, it said, customers who seek cleaner heating options such as heat pumps are penalised. It added that unless policy changes, households opting for an air source heat pump will be paying £305 more in energy bills a year in 2030 than those with a gas boiler.

The report further points to how countries such as France, Germany and The Netherlands are ahead of the UK in terms of rolling out heat pumps, yet even their figures remain well below UK targets. 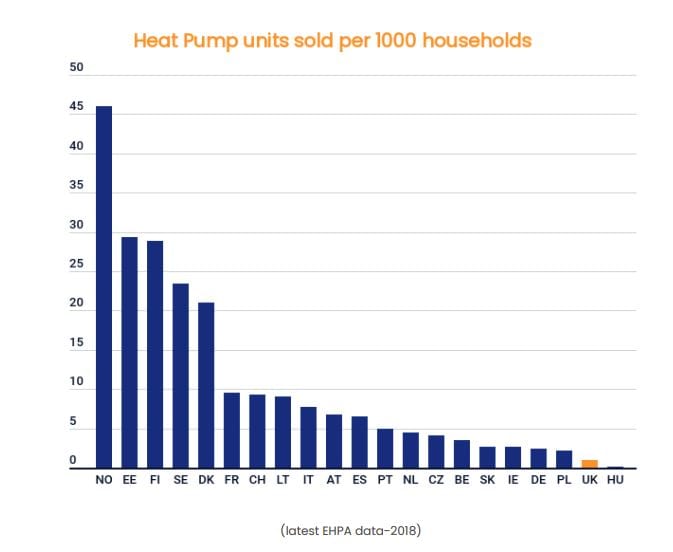 For example, France has ten times the number of sales per capita as the UK. It has lower renewable policy costs on electricity than the UK, and also levies an additional carbon charge across fossil fuels, including gas.

The report presents a number of options for the UK to rebalance costs between gas and electricity and ultimately recommends moving appropriate policy costs off electricity bills and into government expenditure and then introducing a carbon tax.

The tax would be levied across electricity and gas, starting at £54/tCO2e at a consistently increasing rate up to £75/tCO2e in 2030. Given electricity is assumed to become increasingly renewable, gas would bear an increasing proportion of the carbon charge.

This option, it believes, provides the best balance in terms of incentivising heat decarbonisation; properly pricing emissions on gas; not penalising the fuel poor or the average consumer; and limiting impact to the Treasury.

In response to the report Adrian Letts, chief executive of retail at Ovo Energy, said: “Like most energy suppliers, we sell gas to our customers. We know over time this needs to change. We are moving from a pure energy supplier to becoming a decarbonisation partner to support our members’ transition to low carbon heat in their homes. However we cannot do it alone.

“This report shows that the amount of additional policy costs loaded onto electricity bills, makes alternatives to cheap gas boilers such as a heat pump far more expensive. Moving the policy costs onto government expenditure and then introducing a carbon tax levied across electricity and gas would be the fairest and most effective way to decarbonise heating.”

Eon UK chief executive Michael Lewis said: “Britain has a once-in-a-generation opportunity to make a positive change, reduce emissions and kickstart a new industry, but unless we get the economics right, we’ll never get the delivery right.

“To meet the prime minister’s 600,000-a-year heat pump target in just seven years means we need to start making energy bills fairer for everyone now – making sure the right choice is also the cheaper choice.

“Public First’s policy recommendation squares that circle and protects homeowners and government’s finances into the bargain, so for me it’s a no brainer for the chancellor to include these proposals in the next Budget update.”

The case for a carbon regulator

Meanwhile, Energy Systems Catapult (ESC) is calling for the creation of an economy-wide ‘carbon regulator’ to oversee monitoring, reporting, and verification (MRV) of greenhouse gas emissions reduction and removal across the economy.

In a report titled The Case for an Economy-Wide Carbon Regulator ESC argues such a regulator could play a “pivotal role” in ensuring robust empirical and scientific methods for measuring or accurately estimating emissions and ensuring that reduction actually occurs in line with carbon budgets and the Paris Agreement.

It could also certify that reductions in, and removals of, emissions are counted and rewarded appropriately by policy support measures and other incentives.

Three possible options for the regulator are outlined in the report:

Danial Sturge, practice manager for carbon policy at ESC, said while verifying carbon emissions can be straight forward when measured directly from a factory flue or when proxied through energy use, there are challenges for sectors such as agriculture and land use where such measurements are not possible.

He further highlighted how consumption-based emissions, such as those embodied in imported goods and services yield “additional complexity” due to the supply chain life cycle analysis required.

He added: “Currently, investor confidence is dampened – in part – by uncertain shifts in policy and incoherent practices domestically and internationally in monitoring, reporting, and verification of emissions.

“A suitably empowered carbon regulator that implements robust, economy-wide practices can improve this, removing barriers to innovation, and ensuring that incentives drive technologies and processes that genuinely reduce emissions across all major emitting sectors.

“This in turn can provide a robust basis for policy design, standard setting and reporting, and incentive mechanisms to drive investment and operational decisions aligned with carbon budgets and net zero.”