Octopus Energy chief executive Greg Jackson has told Utility Week the company may have to invest in growth overseas because of the slow pace of market reform in the UK. 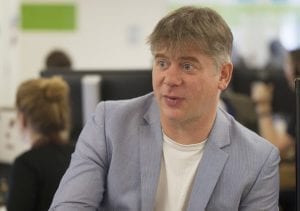 Jackson said he was animated by the future of energy but cautioned “I’m not excited about the pace of change and the market structures that disincentivise innovation”.

Speaking to Utility Week‘s Denise Chevin for an in-depth report into Remaking energy retail , sponsored by Charles River Associates, Jackson also said the company continues to make a loss on its time-of-use tariff, Agile, and has to “invest heavily” to keep it going.

In the interview, which was conducted before Ofgem gave the go-ahead for market-wide half hourly settlement, Jackson stressed the need for regulation to keep pace with innovation in the market.

“We need to move to a charging model for networks and grids which is based upon encouraging off peak use, which will look a lot more like transport charging. The underlying charges to energy retailers have got to change. And I’m terrified that the traditional approach to regulation means this is going to take too long and it’s not going to be strong enough. And we’re going to end up paying far too much to go green.”

Jackson went on to say the current trading environment would make it more likely that Octopus would look to invest in growth overseas rather than in the UK, stoking wider concerns about just how attractive the market is to investors.

He said: “The UK provides this incredible opportunity, and massive kudos to the government and Ofgem for creating a market in which companies can launch and compete. And as a result, we’ve seen dramatic reductions in operating costs – our operating cost is reckoned to be 45 per cent to 75 per cent lower than all the large companies. And that’s thanks to competition, so they’ve done a great job.

“The challenge now is that the UK has been a great place to start these competitive businesses, but we may well find that the UK is not the best place to grow them. Because other countries are looking at the opportunities that UK grown companies offer to drive cheaper and faster decarbonisation, and they’re engaging in more radical conversations about market reform.”

To read a full interview with Jackson, as well as Ed Kamm, chief executive of Shell Energy Retail and other senior industry figures, download the report for free here.