With just two weeks to go until the UN’s climate conference is hosted in Glasgow, Utility Week is concluding the Countdown to COP campaign with a series of interviews with sector leaders, expressing their hopes for the summit and what their companies are doing to drive forward net zero. We kick off with Electricity North West chief executive, Peter Emery.

What do you want to hear from the conference?

A commitment to a global net zero by 2050 and with that we need people, organisations, governments and countries all in agreement of the key steps which will be implanted over the next 29 years.

What should the legacy of COP26 be?

I think this is quite simple and that’s a global commitment to net zero by 2050.

Is your company actively participating in COP26? If so, what are you doing?

Yes, we’re part of a group supporting the North West region which showcases a coherent energy plan for net zero.

Has the UK done enough this year to position itself as a world leader on climate change? 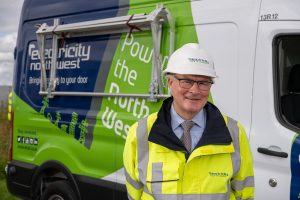 The UK can’t position itself as a world leader in nine months, this takes years of effort and it isn’t a PR stunt.

The UK has succeeded in some areas and can consider itself a world leader in the decarbonisation of electricity generation and the development of flexible energy networks.

But, the UK is behind in other areas such as the decarbonisation of heat, efficient building standards and electric vehicle rollout.

When is your company planning to get to net zero?

As a business our aim is to be net zero by 2038 which is in line with our major stakeholders in the North West. Our plan will be firmed up based on the Science Based Targets Initiative including Scope 3 emissions.

To what extent should utilities look to offset emissions as opposed to focusing on achieving zero carbon?

In our view carbon offsets have a minor role to play and are not a significant factor in our thinking. Before coming to this decision we’ve held discussions with experts at the Tyndall Centre for Climate Change at the University of Manchester and we’ve concluded that carbon offsets are open to abuse, can leave the sector open to accusations of green washing which isn’t helpful but more importantly, we think they can be a distraction from the real task in hand which is reaching net zero.

CUSTOMERS AND THE COMMUNITY

What role do you think utilities have in helping to accelerate the climate plans of local authorities? Is there anything in particular your company is doing?

Electricity North West has a major role to play but we recognise the value in collaboration, sharing expertise and developing a joined-up approach to our strategic thinking. We’re in constant dialogue with all of our major stakeholders in Cumbria, Greater Manchester and Lancashire all of whom recognise the importance of net zero.

What role can utilities play in helping to engage customers on the path to net zero? What do you see as the biggest challenges to that engagement?

Utilities must make the transition to low carbon easy and keep the costs as low as possible. I think at the moment, many customers will think adopting low-carbon technologies is expensive, too difficult or not doable at this current time and it’s our job to change that way of thinking.

We’ve also got a role in being transparent, providing advice and clarity on the services we and others provide and more important providing the data which shows the major benefits of low carbon technologies.

What is your principle ask of government to help your company contribute to the net-zero push?

For the government, I think it’s essential they display more leadership and show ambition in supporting the industry to deliver for its consumers. The utilities industry has a major role to play in net zero and it needs all the support it can get from the government. The government also has a role to play in encouraging more collaboration to help tackle the technical and regulatory barriers to the net zero in a similar manner to the DECC approach to reducing the cost of Offshore wind.

We want the regulator to collaborate with the industry to ensure it has the resources it needs to deliver a fast-moving net zero programme over the next decade. At Electricity North West, we’ve seen two projects, CLASS and Smart Street rolled out successfully after funding support from Ofgem and we’re already seeing the benefits of both projects in the North West and the potential for these innovative technologies to be rolled out more widely across the country.

It’s important that Ofgem and the government focus on early delivery based on no regrets decisions by driving progress quickly. They will get better engagement across the UK by recognising local political leadership and ambition, including local net-zero targets when they assess investment decisions. It’s not just the net zero target date that matters, its minimizing every carbon tonne emitted on the journey starting from today.