Jim Denholm, a senior health and safety consultant for Scottish Power, sums up succinctly why the energy company where he has worked for 33 years leaves nothing to chance when it comes to selecting personal protection equipment for its workforce.

“We had a member of staff a couple of years ago who was involved in an horrific incident, where he was working in the sub-station. There was a catastrophic equipment failure, and he was standing right in front of it. The blast hit him, and he was taken to hospital by air ambulance, and seriously injured.

“But the investigation into the incident determined that where the protection had been worn, there was no damage to his body in that part. It was mainly his hands; he didn’t need to wear anything on his hands at that point. So that was a big boost in confidence that the PPE, if it has to be used, will do its job.

“When people are being trained, we remind them of this incident, to show that the PPE saved someone’s life, and remind them to wear the proper protection.”

To make sure they do, Scottish Power consults widely with staff so that the selection of PPE is comfortable and acceptable. As H&S professionals can attest, selecting the right PPE can be a difficult balancing act. Ill-fitting or cumbersome PPE can itself be a hazard to workers, either creating occupational health risks or the chance that frustration with PPE causes it to be misused. Safety standards cannot be compromised, but cost, though ultimately less important, must always be a factor too.

Denholm shared his organisation’s approach to balancing performance, comfort and cost in making its PPE selections as the keynote speaker in a recent webinar hosted by Utility Week in association with MSA Safety.

Denholm explained that Scottish Power’s safety strategy, including its approach to PPE, began evolving in 2000 when it launched a campaign to reduce incidents. At the time, they totalled more than 80 three-day incidents a year.

“We started doing a lot more engagement with the workforce. We set up different working groups looking at selection of work equipment. Before, the PPE was purchased without any engagement and they were probably looking at the cheapest prices,” he said.

The PPE Working Group comprised employees, safety reps and experts from outside the organisation, including MSA representatives, who were invited in to discuss the products with Scottish Power. Today the PPE Working Group is still going strong and highly active in curating the PPE catalogue.

The company spends £5 million a year on PPE. Decisions of which new products to adopt are based on extensive field trials across many trades and business areas – though cost does come into the equation. Field trials are extensive and can take 6-8 months. Trials lasted over 18 months for the Gore-Tex Pyrad outerwear which Scottish Power collaborated with MSA in developing.

In addition to the working group, Scottish Power has also set up a network of 17 ‘safety circles’ of front-line workers across its regions, which also helps spot trends.

“There’s been a significant reduction in complaints since we’ve established the working group, and we’ve got a lot more involvement from employees – including input into the design. If people feel good about a product, they tend to look after it better, and it lasts longer,” Denholm explained.

“Sometimes we’ll get items sent in by manufacturers for us to discuss. Some items will never make it to a trial because it won’t be suitable for us. And price does have to come into it. We had some fantastic thermal layering suits sent into us, but they were £300 per person.”

That said, cost and comfort are often natural bedfellows. One example Denholm cited was the choice of an MSA V-Gard 950 safety helmet with integrated face protection. Scottish Power had previously chosen a product that staff complained was too heavy and difficult to wear for long periods. “So we went to the market to look for something different. A number of companies came in. MSA was one, and they brought the V- Gard 950, and we decided to put it into field trials. It was recognised straightaway that it was lighter, and a lot easier to use – and the integrated visor was the only one certified for protection against arc flash.

“It was also cheaper than the original, so that was definitely a win-win all round.” 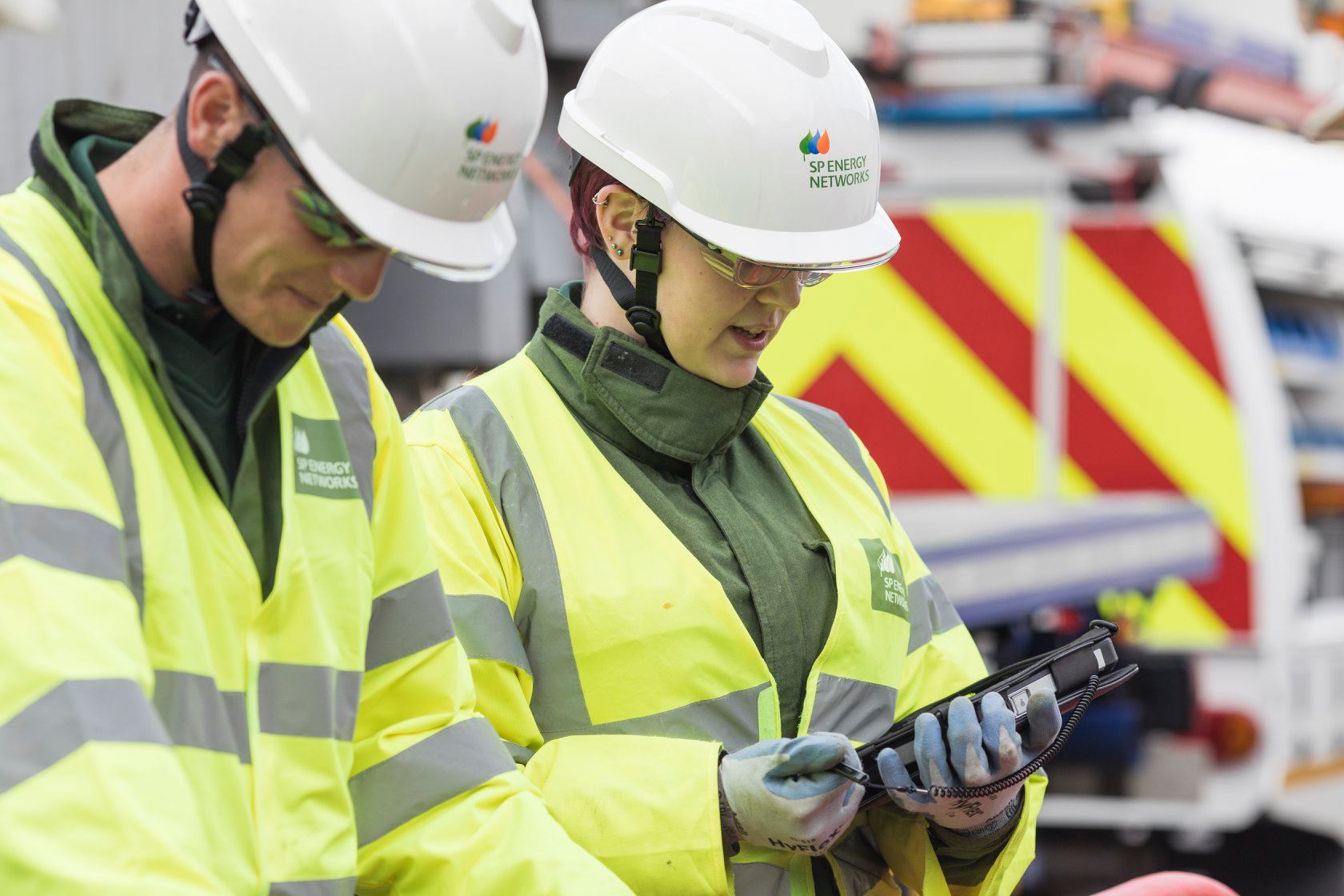 Bell Apparel (now part of MSA Safety) is the licensed manufacturer of the arc rated Gore-Tex Pyrad outerwear and worked with Scottish Power developing the new products. This came about after Scottish Power discovered the waterproof Gore product they had used for nearly 20 years was to be discontinued.

“At the time we were one of the few companies still using what was called FR-235, and with hindsight, it was a very heavy material, though it did provide amazing performance through storms,” Denholm told the audience.

“So we had to look for something else. Gore and MSA Bell came forward and offered us an opportunity to join the trials of a brand new product, which was Pyrad – a flame proof waterproof material that was a lot more lightweight and a lot more breathable.”

Feedback from the trial was highly positive. “And amazingly, we got the Pyrad outer wear at the exact same price we were getting the FR-235 for.

“We were quite slow in the uptake, because we do extended trials, so it probably took us 18 months to make that decision, but we’ve now made that transition very successfully.”

Paul Bell, sales director for MSA Bell , added his perspective on the collaboration. “We work very closely with Scottish Power. In the development of the Gore-Tex Pyrad garments, it was key to get employee engagement from the start and the extensive trials were also very important.

“One of the key things with Gore as a company is that they have a holistic approach from start to finish, looking at the fabric, the seam tape, the machinery. And the whole licensing programme is about making sure that the garment that’s manufactured is fit for purpose.

“It has to go through something called a ‘guaranteed performance standard.’ Part of that is that it goes through a rain tower test, and it goes through climate testing. Field testing is also very important because we find out a lot from people who have to do very difficult jobs in some terrible conditions.

“And for us to manufacture something that’s fit for purpose, that meets the standards, is comfortable, and helps team members keep focused on the job is vital.”

Both the MSA V-Gard 950 helmet with integrated arc-flash faceshield and the MSA Bell jacket are designed to protect workers from arc-flash, an ever-present danger. Over 55 per cent of people in the industry will have been involved in an arc-flash, though this does not necessarily result in injury or damage.

“The Pyrad range’s arc-flash protection is one of the highest in the industry,” said Denholm.

Environmental footprint pervades all operations of utilities as they endeavour to reduce carbon dioxide emissions, so it is not surprising that this is factored into the selection of PPE. In response to a question from the audience, Jim Denholm said: “We recently had an environmental audit, and one of the questions was what do you do with your PPE when it’s finished? And that’s something we will be taking up in our new tender, for anyone who’s going to manufacture or supply PPE for the Scottish Power group – one of the criteria this time will be assisting us in the recycling of PPE.”

Marc Jenkin, MSA’s industrial sales manager, for South Wales and the South-west, added: “MSA is a member of the National Hard Hat Recycling Scheme. So if someone’s looking at large volumes, and have that requirement and want to benefit from a scheme like that, contact your local MSA rep. It is a big topic at the moment, and I think it’s right that opportunities are there to recycle.”

To see a free recording of the webinar, click here

Supporting the post-pandemic workforce is one of the frontline challenges at the heart of Utility Week Live 2022’s live content programme.