Scottish Water’s decarbonisation strategy works back from the net-zero target of 2045 to establish what needs to be achieved and when – as well as who will pay. As part of our Countdown to COP series, chief executive Douglas Millican talks to Ruth Williams about taking a long-term view and how the company sought public backing for its plans.

As in England & Wales, customer input is an increasingly important part of the price control process north of the border.

Ahead of the price review in 2015 a customer forum was created between the Water Industry Commission for Scotland (WICS), Citizens Advice Scotland and Scottish Water.

Millican explains that regulatory acceptance was dependent on the company’s plans being approved by this group, making it a powerful platform. 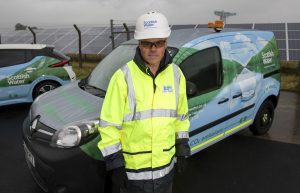 He says it was the forum that made the company look beyond six years for the 2021 price review. “This is a long-term industry needing long term decisions over assets that last typically for decades or centuries. We have to make sure we are rooting investment planning as much as possible in the longer-term.”

He adds: “As an industry we’re really good at eking out the life of assets for an extra five or six years but not looking at what is needed longer term.”  The company worked out that widespread replacement would be needed in the 2040s, and it worked backwards to calculate what it would take to manage that, and how to fund it.

This raised a question of intergenerational fairness but the overwhelming feeling from the forum was that payment should be spread rather than delayed.

“The forum clearly said don’t put the necessary work off, and don’t back-end load bill increases. Even with the pressures of Covid-19 people said they did not want it put off. We might find better ways to manage assets and the work can wait to the 2050s, but it won’t be the 2080s – we’ve got to face that asset challenge between now and the middle of the century.”

For the next two years billpayers will see a rise of consumer price index (CPI) plus 2 per cent per annum to meet those future needs. “We’re in danger of undercharging the current generation with the consequence of future generations picking up the tab” Millican says. “It’s an intergenerational equity issue.”

The consumer forum showed taking the time to talk to billpayers about issues and the complexities of the vision for the sector and the climate they were satisfied to contribute more.

Millican says in exchange for the increased charges, the organisation developed a vision backed by ministers to “inspire excellence” through three key ambitions: service excellence, going beyond net zero emissions, and delivering value and sustainability.

This applies at all stages of abstracting, transporting, cleaning and distributing water, as well as managing catchments and resources and encouraging households to use them efficiently. Millican adds for wastewater there will be a move towards more smart management of networks, storm overflows, wastewater treatment and recovering value from waste.

“Implicit in all of that is dealing with whatever our climate throws at us, climate change adaptation is a key part in pursuit of service excellence,” Millican adds. “Thankfully the days of climate change deniers are behind us and everyone recognises the challenge. Scotland is committed to reaching zero emissions by 2045 and for our part we are committed to getting there by 2040 for operational and investment emissions. We host twice as much renewable energy than we use in operations and are looking to reach three times as much as we consumer by 2030, so for operational emissions we are nearly there.”

He believes it must be about more than setting targets if the massive global and societal challenges are to be met. The company has further work to be done around energy efficiency, peatland restoration, sequestration and greening its fleet, but Millican says a greater concern is emissions from its investments and how the supply chain will reach the targets.

“We’re going to be doubling our capital investment over the next 20 odd years because of the asset replacement issue, so this is a real opportunity for partners that deliver in a decarbonised manner. Those parties that deliver smart, low or no carbon solutions will be our long-term partners.”

In the last price control period (2015/21) there was a move towards the rolling investment approach. Regulators recognised the merit in this method and set out an investment planning and prioritisation framework. It assesses all the required projects for the next 10 or 20 years to filter and order work. Schemes that meet the policy objects of Scottish ministers are further investigated and options for delivery are evaluated for efficacy then prioritised within a schedule ready for construction.

“Choosing the most effective option for delivery will be a real development journey for us,” Millican explains. “We will appraise options against multifaceted needs of service, net zero aims, social and capital dimensions, economic, socio angles and impacts all to be considered.”

The six-year cycle has been broken in favour of a rolling process with long- and short-term needs assessed and options appraised.

“Every quarter schemes will move through that process, so there is a massive onus on us to make the investment appraisal very robust. The confidence from regulators is important to show we are coming up with good solutions and delivering increasing value for money for consumers.”

WICS has given the green light to a 30 per cent increase in investment for the next six years, which is just over £1 billion.

Despite an election looming in early May, the government has been willing to back a plan that will see bills rise.

Millican explains the increase was determined by working backwards from what investment will be required in 20 years’ time and calculating incremental increases for the next two decades to avoid any shocking bill hikes.

It is also informed by what is believed to be needed in the next six years, although the organisation believes more than that amount should be spent, therefore the prioritisation tool is essential.

“Achieving these ambitions, delivering the efficiencies we are committed to and keeping prices reasonable for customers will not be achieved if we just carry on as we are at the moment. We are committing to a fundamental long-term transformation of Scottish Water to turn into the organisation we need to be for the future.”