The cost to plug the “water poverty gap” could be up to £720 million, according to a report commissioned by Water UK.

The report by Cepa showed the number of people living in water poverty in England and Wales is greater than previously calculated as of 2019/20, with more than 4 million households struggling to pay their bills.

The report said around 11.5 per cent of households across England and Wales fall between the three and five per cent bill to income ratio thresholds used to define water poverty.

Water UK commissioned Cepa to undertake the study as part of the ambition to eradicate poverty. 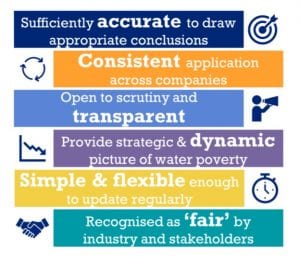 In 2019 the industry made a Public Interest Commitment (PIC) to “make bills affordable as a minimum for all households with water and sewerage bills more than five per cent of their disposable income by 2030 and develop a strategy to end water poverty.” Quantifying the amount of people who struggle to pay is a step towards the PIC goal.

There has not previously been a common definition of water poverty or a metric to measure the numbers of households in different regions that would qualify. 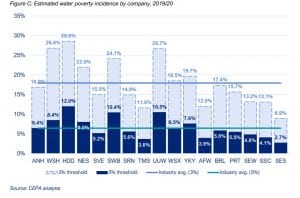 Regionally, Cepa found Hafren Dyfrdwy had the most billpayers struggling to pay in both the three and five per cent thresholds, followed by United Utilities and Welsh Water. The regions with fewer homes struggling to pay were SES, Thames and Affinity. Cepa said there were considerable variations across the country including large differences within and between supply areas.

The analysis took account of current interventions such as tariffs and support mechanisms, which vary between companies, partly influenced by the willingness to pay of other customers. It found that in many cases the support available still left billpayers within the three or five per cent poverty threshold. It suggested the reduction in water poverty rate from interventions by companies was one per cent for the three per cent threshold and 1.2 per cent less at the five per cent threshold.

This is the first time an attempt to measure industry-wide water poverty has been undertaken and builds on work undertaken by Cepa last year to find a suitable metric for measuring levels of water poverty regionally and nationally. The overall purpose of the project was to provide estimates and a methodological basis for updating them over time.