The arrival of greater distributed energy on the network is good news for the transition to net zero. But it brings with it new issues and challenges for network operators. The current networks, including their protection equipment, were designed to ensure generation could meet the needs of demand customers and thus predominantly for one-way power flows. The future of the networks looks very different.

In its Future Energy Scenarios modelling, National Grid indicated the level of distributed generation on the network could rise to 83GW by 2050. This would be an increase of around 166 per cent on current levels. 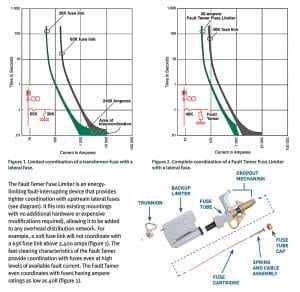 One consequence of such a marked rise in the level of distributed generation on the network as we move to net zero is an associated increase in fault current levels.

Increasing fault current places more stress on network equipment, raises the likelihood of asset failure and means that protection needs to be adapted to higher fault levels. This has obvious cost implications but there are also reliability concerns both for the generation connected to those lines and for customers. These impacts are already beginning to be felt by the distribution network operators (DNOs). The pressure could increase too. The RIIO-ED2 framework is set to include incentives to improve reliability, including short-term reliability and reduced interruptions.

It is for this reason that manufactures have turned their attention to solutions which can limit the impact of rising fault current levels. One such solution is being offered by S&C Electric – the “Fault Tamer Fuse Limiter”. This solution is more cost effective than the alternatives, using reclosers or reconductoring the line.

What is the Fault Tamer?

S&C’s Fault Tamer combines the functionality of a conventional fuse and a backup current-limiting fuse in one package (see diagram showing key components). That means that when the Fault Tamer operates it releases 99 per cent less energy. Because of this, it significantly reduces sparking and the associated fire risk, which is a challenge for the standard fuse.

The Fault Tamer has two elements: a standard fuse and a backup limiter, which work together but can be separately replaced. For low-level faults the Fault Tamer only needs the fuse element replaced and for the higher-level faults both elements need replacing.

The Fault Tamer is designed to run on spur lines. It has a maximum current rating of up to 20 amps. The equipment was originally designed for use in the US to protect transformers, whose fuse mounts were not rated for this level of current. Meanwhile, the dramatic reduction in sparking has seen the Fault Tamer used in Australia as it reduces the risk of bush fires, which are often started by electrical faults.

We haven’t seen Fault Tamer being in used in Great Britain yet as its application is different to that of both the US and Australia. But the application is becoming more relevant now, with more generation coming on, pushing the fault current up. And that problem is only going to accelerate.

What benefits can the Fault Tamer bring to the network?

Much of Britain’s overhead power line network has been in operation for many years, during which the power flow has predominantly been in one direction – from sources of generation to the end customer. That has worked perfectly for the system we have had, but the increase in the levels of generation connected at distribution voltages is putting an increasing strain on lines which were never designed to take those levels of current.

There will always be faults in the network, but as the current is increasing it’s causing more issues, meaning that distribution companies are having to take decisions about the way networks are used. Fault Tamer can help because it can prevent larger faults. This reduces stress on the network, meaning that assets are no longer exposed to the high fault current, which will help reduce the likelihood of premature failure.

S&C Electric envisages a market for the Fault Tamer not just in areas with high fault levels but for those at lower levels as well. Up to 800 amps, the fuse element will blow, and that means just the fuse element will need to be replaced, so it’s more cost-effective than alternative solutions. But when the fault current goes above 800, even if it’s a 2,000-amp fault, the backup limiter will prevent the assets on the line from experiencing a high-level fault current, which again has the effect of reducing the amount of energy affecting upstream equipment.

The impact of fault currents has wider implications for resilience than just those on the line where the problem occurs. Traditionally, fault currents put a great deal of stress on network equipment and because they take a lot of current, it means that other customers on different lines will see their voltage drop. In turn this reduction could be enough to stop some equipment from working. Installing a Fault Tamer can therefore potentially protect not just the people directly using the affected line but also those in the wider area.

Another key benefit of the Fault Tamer is that it could extend the equipment life of other components, such as that of a transformer. Every time a fault current is put through a transformer, it causes a mechanical and electrical force, which ages the transformer. Indeed, as fault currents rise, it may mean companies facing further faults as increasingly it exposes weak points on the network.

There are alternative solutions, says S&C Electric, but the company claims these are considerably more expensive, by as much as a factor of 12, and come with substantially higher maintenance costs. “Alternative options would be to install a recloser, or reconductor a whole spur with larger diameter wire, but both these options would be significantly more costly and time consuming,” says Nathan Hollins, senior applications manager at S&C. “The Fault Tamer is a more cost-efficient solution to meet the challenges posed by rising fault currents and thereby to support the UK distribution networks in the transition to net zero.”

The rapid pace of change needed in the energy network to reach net zero will accelerate the adoption of renewables and distributed energy systems and put stress on the network. Maintaining reliability will become increasingly challenging. S&C’s Fault Tamer offers a means for networks to boost their resilience in a cost-effective way. The benefits of the Fault Tamer include:

• Being easy to apply and install.