Industry leaders met at a Utility Week virtual roundtable in association with Microsoft to debate the benefits, barriers and solutions to data sharing. Denise Chevin chaired the meeting. 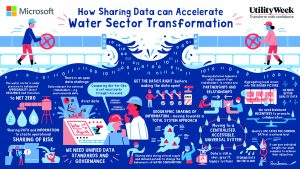 The context of the discussion

Water companies face huge pressure to improve across a number of areas, including leakage and customer service, while adapting to climate change and delivering on a pledge to become net zero by 2030.

With data collection at the heart of so many water companies’ activities, this virtual discussion looked to explore whether the sector was leveraging data to best attain these and other ambitious goals set out by Ofwat and in the sector’s Public Interest Commitments, and how could data be collected and shared across companies to accelerate this process.

It is a timely moment to engage water companies and regulatory experts to debate these important questions. Water companies are gearing up to bid for a share of Ofwat’s new £200 million innovation fund, which is encouraging collaboration and the sharing of ideas and processes. And secondly, Ofwat is in listening mode as it starts a series of consultations to prepare the groundwork for its next price review (PR24).

There was a firm view that greater collaboration makes sense across water companies. There was therefore support for Ofwat’s £200 million innovation fund for water to help tackle the huge challenges presented by climate change and population growth – as it was agreed that it’s not sensible for 17 companies to all be trying to solve these questions individually. Working on problems together could provide better value for money.

Ofwat has confirmed that it is advocating an open data approach to successful projects so that customers around the country can potentially benefit from lower bills and a greener future.

As a number of participants also pointed out, there is a great deal of collaboration already in the sector and data that is shared or made openly available for a number of purposes, including leakage and customer measure of experience.

“We do gather data collectively, for example to review where we are on carbon as a sector,” explained one participant, adding, “and much of the regulatory reported data used for benchmarking is all gathered in the same way and available.”

The need for data standards and structured data

A key theme to emerge from the discussion was the lack of standards in the way data is collected and presented across the sector, which makes it difficult to share in a meaningful way. It was felt that before data could be shared companies “must get their own house in order”.

To be able to meet these demands, the water industry must rely on combining consistent, accurate and reliable data to generate insights that can be used to improve knowledge, understanding and decision making. As participants pointed out, there was sometimes not even consistency within organisations, let alone across different companies.

It was agreed that teams need to collaborate and agree upon common standards for defining and modelling key business, and how data about these can be improved and shared across information systems.

An example of where information was often not generated in a standard way was environmental data collected locally in companies’ work with farmers, with whom water firms tend to work closely on catchment management and also in terms of controlling run-off chemicals into water courses.

It was thought that the UK Water Industry Research (UKWIR) and the Water Research Centre would be well placed to come up with more standards around structured data. It was also thought that technology companies could play a key role.

The pressure of competition

The fact that Ofwat uses a number of regulatory tools that involve comparing the performance of water companies means they see themselves in competition with each other, even though they are regional monopolies, because they can potentially make profits by being efficient. One participant mentioned that this was particularly strong in retail with incentives such as SIM or C-MEX, where the company ranking for customer service makes a big difference to allowed revenues.

That can lead to companies being reluctant to share advantages they have, including things like open data. So while they generally saw the benefits, there will always be a challenge from shareholders to keep the competitive advantage.

A participant with a regulatory expertise put this in context: “Regulators know this is a tricky balance, of course. The trick is to find ways to incentivise collaboration without undermining the incentive for efficiency and performance – so customers get the best of both worlds.

“For example, the innovation competitions that Ofwat is running at the moment help to support that, by explicitly ring-fencing money for innovation on the condition that this is shared with the sector – for example, any research data has to be open. Companies have to bid for this money, mostly for projects in partnership with others. This means that expenditure on innovative projects doesn’t hit any company when it comes to regulatory benchmarking, and so there is no longer a disincentive to share the innovation.”

The effort outweighs the rewards

Others in the discussion felt that the competition versus collaboration was something of a red herring and the fact that information did not get shared was more to do with geography. “It’s hard sharing data – and requires huge effort and resource that can be very hard for companies to commit to,” was a comment from one participant, which drew agreement from many present.

There was a feeling for some that being open with data didn’t always pay in other ways as well. “Sometimes it’s hard to quantify the benefit of open data, but the risk can outstrip the reward,” said one participant, citing as an example of the backlash received by one water company when it had been open about its struggle with tackling pollution incidents.

A shortage of people with data analytics skills was also holding back efforts in some organisations, while others were looking to boost these skill sets: “We’ve seen a huge increase in demand for data scientists. We’ve grown our data science and product teams in response to this but we need to look beyond this to understand how we increase our data capabilities across our organisations,” commented one participant.

Asked in which area water companies could benefit most from sharing data, it was agreed that consumption data would be a good place to start. Customer engagement and smart metering have not traditionally been areas that water companies have worked together in. But pressure to preserve water means it’s vital for water companies to have as much information at their disposal about water consumption, both to plan and to help change consumer behaviours.

Measuring the cost per capita consumption is one of the performance commitments in the PR19 programme. The average consumption across the country – at 141 litres per day per person per day – compares unfavourably to similar countries such as Germany (121 litres) and the UK government has set an aspirational target for the sector of 130 litres per person per day.

Metering is the strongest tool in the box for reducing consumption, with metered customers using 33 litres less per day on average, according to reports. But measuring water consumption per capita is notoriously difficult in areas where metering is entirely voluntary for households.

One method being explored by one water company to change behaviour was looking at energy usage and linking that to water consumption – as one of the biggest consumers of energy is heating up hot water.” We are assessing potential energy savings when we do smart home visits for new smart mater customers but there’s absolutely potential to link water and energy consumption and carbon emissions at a more systematic level,” explained one participant.

Ofwat has come up with guidance as part of the PR19 programme but has acknowledged in it that “there are a number of areas which would benefit from future independent research to determine good practice”.

Rina Ladva, head of manufacturing, energy, utilities & life sciences at Microsoft UK, and her colleague Steve Chawner, director utilities at Microsoft, agreed this would be a good area for the sector to collaborate in. Microsoft has itself pledged to be water positive by 2030, meaning that it will replenish more water than it uses.

• There is widespread support for greater data sharing as a means of tackling some difficult and complex issues facing water companies.

• There is an urgent need for the sector to come together to agree on methodology and standards for structuring, collecting and reporting data as a foundation for data sharing.

• Water research bodies are best placed for facilitating this – though technology companies could play a role.

• Regulatory incentives need to be rethought to encourage more collaboration and less competitive behaviour over and above those offered in the Ofwat’s innovation fund.

• Collaboration on measuring per capita water consumption, which has changed during the pandemic, is a timely and a much-needed area to pool resource and share information.