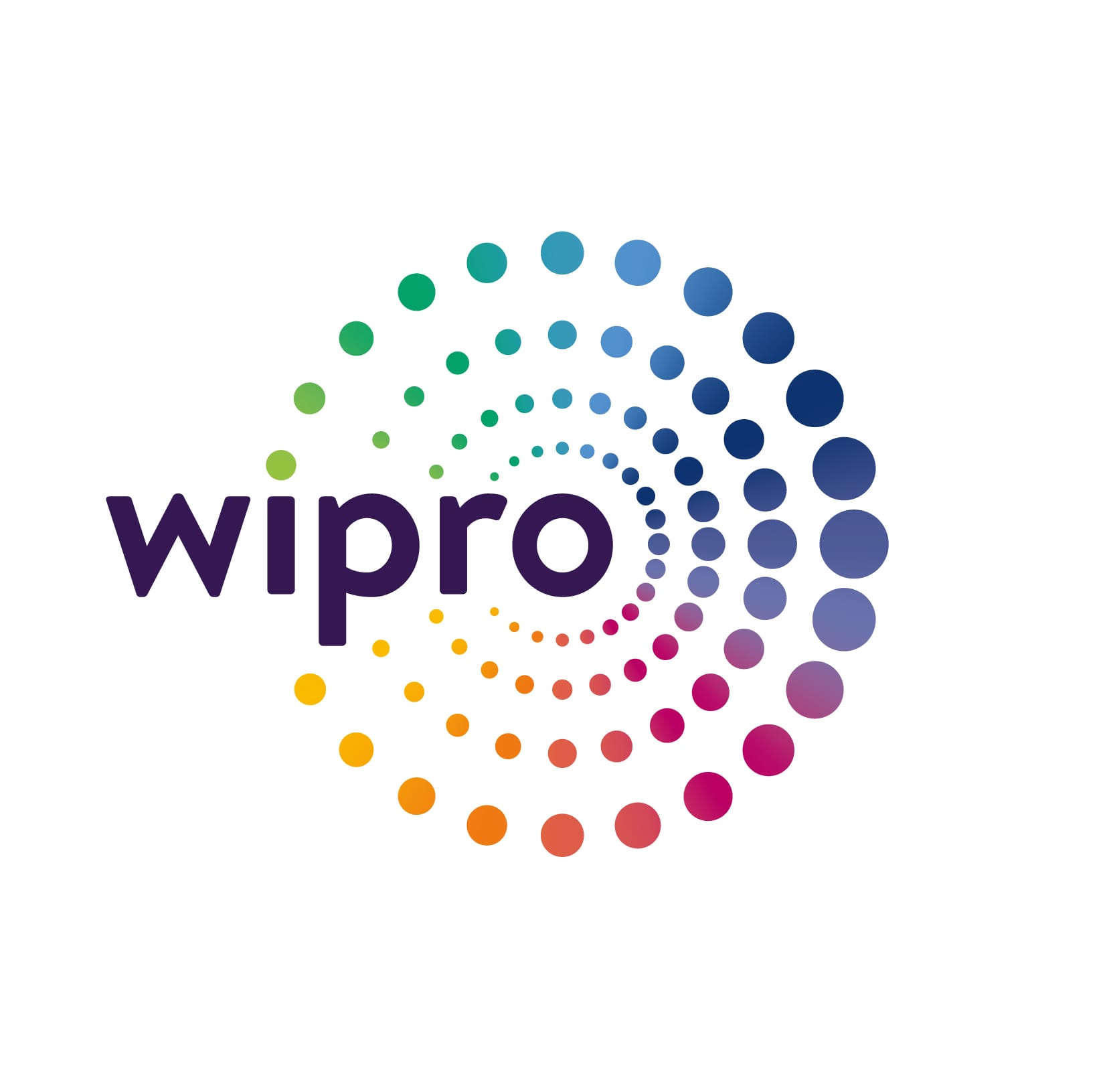 Utility Week, in association with Wipro, asked utility technology leaders about their strategic vision and the role key technology fields will play in the future of their organisations.

The utilities sector, in common with most industries, is undergoing a technological revolution. And yet the shape in which this revolution will leave the sector is far from certain.

Indeed, it is not yet clear which technologies will have the biggest impact on water and energy companies, nor necessarily what that impact will be. What we can say with confidence is that organisations that want to be fit for purpose in a digital future need to be aware of technology potential and the role it could play in accelerating the delivery of organisational goals. he utilities sector, in common with most industries, is undergoing a technological revolution. And yet the shape in which this revolution will leave the sector is far from certain.

Yet a survey of senior industry figures, carried out by Utility Week, in association with global technology consultancy Wipro, reveals that a surprising number of ­businesses seem under-prepared in this respect.

Over one-third of our expert respondents – technology and innovation leaders who are members of the Utility Week-Wipro Technology and Innovation Council – said they do not yet have what they would describe as a clear vision for the role technology will play in how they meet their industry’s challenges.

John Beaumont, chief digital officer at Thames Water, believes one explanation for this result is that the conversation around innovation in the sector has been too nebulous to date.

“Every company talks about it [a vision] and there’s lots of media hype,” he says. “That’s helpful in a way but also unhelpful. Ofwat is certainly trying to encourage industry-wide effort on innovation but it’s more a statement than an effort to help deliver it. I don’t think they’ve targeted where that innovation should be.

“There are a series of problems that need to be solved, and to solve those we’ll need to innovate,” he adds, citing cutting pollution and re-plumbing London’s sewers as two examples from his own business. “Rather than generic innovation challenges, it would be better to help the industry coalesce around those [specific] challenges.”

He argues that this would most productively be done collaboratively but that this is a problem in a sector which is “incentivised to compete”.

Beaumont says that he believes the energy sector is “more focused on the problems” than water. It’s a statement supported by Barry Carruthers, head of innovation, sustainability and quality at Scottish Power.

Carruthers is among those with a very clear idea for the role technology will play in delivering organisational ambitions and overcoming its challenges.

Outlining Scottish Power’s strategic approach to innovation and technology application, he describes it as a “radar approach”, with technologies being assessed as either “now, near or far” in terms of how close to being deployed they are.

In Utility Week’s survey of technology leaders, a number of questions were asked about four “building block” technologies which previous industry research and wider experience-based evidence had highlighted as having potential to transform utilities services and operations in a number of different ways. 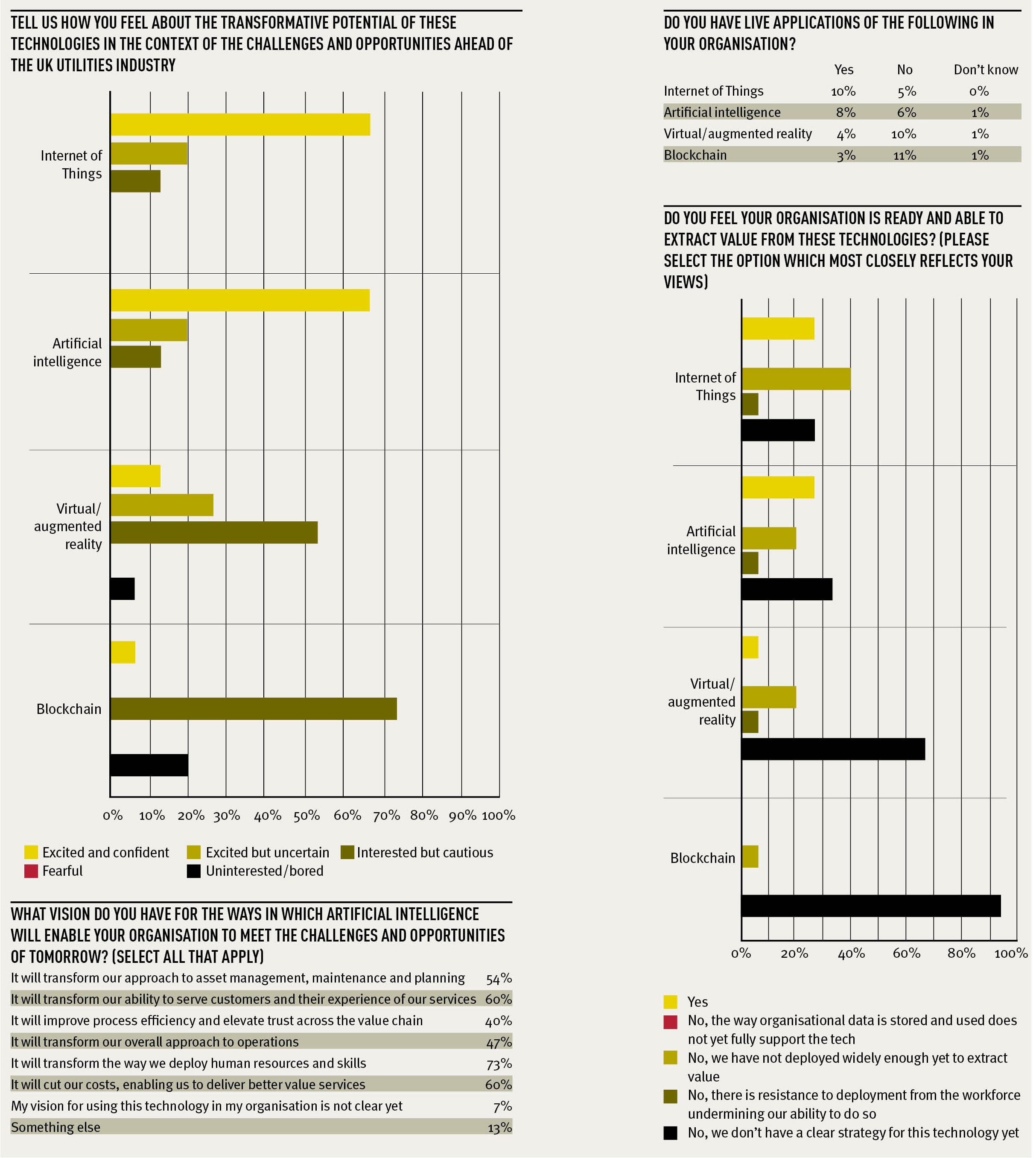 The foundation technologies were: the Internet of Things (IoT); artificial intelligence (AI); virtual or augmented reality; and blockchain. Our survey asked how important each technology was to respondents’ businesses and how they personally felt about its transformative potential.

For Carruthers, all of these technologies should be viewed in the “near” category. Indeed, Scottish Power is already actively using some in isolated parts of the business. Our broader survey group, however, was divided in sentiment over just how transformational these different technologies will turn out to be.

IoT and AI are viewed as far more likely to have an impact on the sector in the short to medium-term future than either virtual or augmented reality, or blockchain.

Around two-thirds of respondents said IoT features either “quite” or “very” prominently in their organisational plans on a five-ten-year horizon. A slightly larger proportion said the same of AI. Given the fundamental role IoT and AI are playing in the emergence of smart infrastructure and smart homes, it is unsurprising they are expected to have such widespread significance.

At the other end of the spectrum, blockchain is not yet seen as a transformational technology within utilities, with almost 60 per cent of respondents admitting it did not feature at all in their organisation’s vision for the next five-ten years. Perhaps more surprisingly, nearly 40 per cent of industry leaders surveyed said the same of virtual or augmented reality, potentially suggesting that its ­capability has not been fully realised.

SES Water’s innovation manager, Jeremy Heath, echoes the survey results, claiming that “industrial IoT is going to be a transformational technology for the water industry”, especially when combined with the data ­processing power of AI.

He believes that IoT networks will help revolutionise water companies’ understanding of and responsiveness to their distribution networks.

“That’s currently the big hole in our understanding of what’s going on,” he explains. “IoT capability allows us to look at the network to understand what’s happening within our districts. These are very, very new technologies. It’s only just starting now but it will mean we get far more data coming back from our network and the cost of deploying sensors will drop dramatically.”

Heath accepts that “scalability will be a challenge” – again reflecting survey insights, which showed that respondents felt wider deployment is needed before they could claim their organisation was truly ready to reap benefits from IoT.

He says: “The technology exists [but] there’s an integration issue and a cost issue. A sewer monitor today costs about £1,000; there’s no reason it can’t cost tens of pounds. No-one has thought about scale economics and as a consequence it’s not cost-effective to deploy.”

That doesn’t mean that our survey respondents don’t see IoT as having a major impact on asset management in the future. More than three-quarters said they believed it would transform their approach to asset management, maintenance and planning. Meanwhile, nearly 70 per cent said it would transform customer experience and the overall approach to operations. Just over half said it would cut costs and deliver greater value.

Meanwhile, virtual or augmented reality apparently still has some way to go before it has an impact on either the water or energy sectors. Whereas more than 60 per cent of respondents said they were “excited and confident” about the potential of IoT and AI to help them meet future challenges, that number dropped to under 15 per cent for virtual/augmented reality, with a similar proportion saying they already had live applications.

For those that did recognise transformational potential in virtual reality, the highest expectation was that it would transform the way human resources and skills are deployed, followed by an expectation that it will transform asset management approaches. This reflects experiences in other sectors where augmented and ­virtual reality have been applied to transform field operations and employee training or ­upskilling programmes.

Heath recognises that there are “certainly use cases for virtual reality”, particularly around training. But he adds that “so far in the industry it’s pretty niche”. He adds: “It’s not something you can’t do without. It might just make certain things easier; there’s very little where if you can’t do it actually, you can do it virtually.”

Blockchain has even less take-up so far in the sector. Under 10 per cent of respondents said they were “confident” about its potential, with the vast majority declaring themselves “interested but cautious”, and more than 80 per cent saying they did not yet have any live applications.

Carruthers says that, at Scottish Power, blockchain technology sits in the “longer-term prospects” category. “You know it has some value and it can do cool things for you,” he adds. “But you’re not quite sure how best to use it or if it’s better than other techniques that are already out there.”

“It’s not ‘now’ for us, but it might not be far away, so it’s right for us to get our hands dirty with pilots and things like that,” he explains. “With all of these things, we’re gradually implementing them where we can see the benefits but none are a silver bullet.”

Our survey shows that such an outlook is far from universal across utilities. With technology and market conditions moving much faster than utilities strategies are wont to, a closed mind to “niche” or emerging technologies, and the lack of a clear strategy for pivoting to grab benefit from new technological potential, could leave companies on the back foot.

About the Technology and Innovation Council

The Utility Week-Wipro Technology and Innovation council originally launched in 2015 with the ambition of providing a regular forum for ideas sharing and inspiration for utilities professionals with responsibility for technology uptake and innovation.

The council has gone from strength to strength and now has the support of a broad community of innovators and technology experts from across the energy and water sectors. Their guidance and insight has led to the publication of a series of bespoke research reports, each uncovering valuable insights into the priorities and challenges faced by those attempting to create the utilities of tomorrow.

Your strategy must be flexible enough to cope with any eventuality, says Sarat Chand. 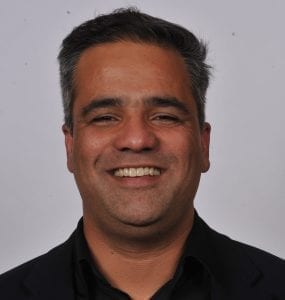 That technology is changing the world is no longer in doubt. But when it comes to how to manage the changes that the digital age is bringing about, there’s all to play for.

For those organisations operating in the utilities sector there are various sets of technologies that are reshaping – or have the potential to reshape – how they interact with customers, supply chain partners and their own staff.hat technology is changing the world is no longer in doubt. But when it comes to how to manage the changes that the digital age is bringing about, there’s all to play for.

Our research shows that not all water and energy companies have a clear strategy on how best to make these technologies work for them. However, we believe that not only are all these technologies valuable, but that ignoring them could leave businesses trailing peers in performance levels and competitive relevance.

The results show that organisations currently have a much clearer understanding of and vision for Internet of Things (IoT) technologies and artificial intelligence (AI) than they do for virtual or augmented reality and blockchain. Well over half of the organisations we surveyed have live applications for IoT or AI, while that number dropped to less than 20 per cent for virtual or augmented reality, and under 10 per cent for blockchain.

This is perhaps unsurprising – IoT and AI are fundamental building blocks for all future utilities. They underpin ambitions for smart homes and smart infrastructure.

However, none of the technologies we asked about in this research should be taken in isolation. Indeed, a good strategy for the medium to long term should be flexible enough to adapt to innovation in any of the technology types discussed here and we have seen in our work with utilities around the world that all of them have a part to play in allowing organisations to achieve the efficiencies and service improvements they desire.

The power of virtual or augmented reality in revolutionising field operations and personnel training should not be underestimated. And blockchain has real scope to transform interactions between today’s market segments and data silos, again allowing for a new age of innovation in utility business models, services and customer experience.

Whatever strategy companies ultimately pursue, an experienced and knowledgeable technology partner is an invaluable resource to help guide them through their digital futures.

Ofwat: Companies must prove appeals are about customers not profits
14/02/2020
News
Utility of the Future: Where are we going to find the workers of the future?
14/02/2020
Analysis