United Utilities has begun a £30 million rollout of leakage loggers, which it says will be the largest network of internet of things detectors in the world. 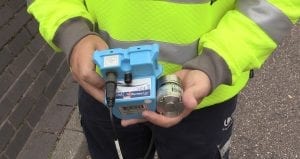 The company will install 24,000 narrowband internet of things (NB IoT) acoustic devices as part of its plans to reduce leakage by 20 per cent in the next five years.

Paul Parr, UU’s leakage technical manager, said the technology holds an advantage over standard 2G technology used by many acoustic loggers, which can be restricted by bandwidth and connectivity issues.

“In the past, we have occasionally struggled with connectivity from loggers which are housed underground inside chambers with thick metal lids and underneath parked cars. We can lose vital time if there’s a leak because we only receive the data once a day,” Parr said.

“The NB IoT loggers mean we can guarantee we get the data when we need it. In early trials the technology kept our loggers 100 per cent connected, which is a massive step change.”

The company said as well as the largest programme of NB IoT loggers, it will have installed 100,000 of the acoustic devices by next year making it the largest estate of loggers in the world.

The company is adding 45 dedicated leakage detection engineers to its staff to achieve the reduction target.

In 2019/20 the company outperformed its leakage target and remained above the industry average at 446ML/day.