Installing one million smart water meters each year could cut the UK’s greenhouse gas emissions by 0.5 per cent over the next 15 years.

The impact of smart water meters on reducing the UK’s carbon emissions has been calculated in a new report by Waterwise and Arqiva that suggests a nationwide rollout would save one billion litres of water daily.

The report, Smart water metering and the climate emergency, was created to emphasise the link between water usage and emissions, with domestic consumption contributing around one tonne of carbon per household annually.

Waterwise and Arqiva are calling for a mandated metering programme to fit all households in England with a smart device by 2035. It urged prioritisation of rapid rollout of smart metering.

“We need the UK’s devolved governments and regulators to recognise the role that smart meters can play in helping reduce carbon emissions alongside water usage and leakage,” the report said. “Given the impact and urgency of the climate emergency, there is a strong argument for governments and regulators to encourage water companies to implement smart metering across the UK, at pace and with appropriate support in place for vulnerable customers.”

Nathan Richardson, head of strategy and policy at Waterwise, described the links between water usage and carbon emissions as a “hidden area” that is often overlooked.

Based on figures from a 2019 Water UK report, Waterwise and Arqiva approximated that a modest five per cent reduction in UK household water consumption could deliver more than a megatonne of Co2 (MtC02e) per year. A ten per cent cut in household consumption could deliver around 2.2MtC02e annually, which is comparable to the total annual operational greenhouse gas emissions from UK water companies’ own operations – currently around 2.4MtC02e.

An estimated six per cent of the UK’s total carbon emissions are related to supply and use of household water, of which 90 per cent comes from household usage and the other 10 per cent through the supply, treatment and removal of water. Coordinated by Water UK, the sector published a route map to curtail its own emissions by 2030. Richardson suggested it should next consider household usage as a more significant source of carbon.

The report’s authors are calling for the link between metering programmes, charging and water stressed areas to be removed to enable all companies to roll out metering regardless of their region. Waterwise and Arqiva want to see investment planning for PR24 to be used to accelerate a rollout. Richardson said mandating this would allow the rollout to be managed rather than done on an ad hoc basis.

Laurie Patten, director of strategy and regulation at Arqiva told Utility Week one million smart meter installations each year was a realistic and achievable target based on evidence from Thames and would cost around £10 a year for each meter over its lifetime.

Patten described the “excellent legislative opportunity” to feature water efficiency and metering explicitly in the upcoming Environment Bill, which currently at the report stage includes no unambiguous reference to either.

The report was produced to feed in to and inform the debate around water efficiency with members of the Houses of Parliament. Patten said ahead of COP26 in November there is a “need to accelerate, to do more and faster” to cut emissions by the mid-2030s.

Data from the National Framework for Water Resources 2020 showed that most parts of the country will experience a degree of water deficiency with the southeast most affected. Northern England will have a surplus. 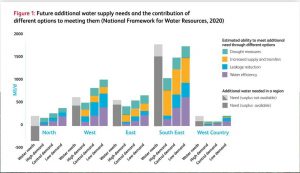 In all parts of the country water efficiency measures will be required to meet future water needs, of which the report estimates smart meters can help homes save between 16-20 per cent, while non-smart meters can curb consumption by around 15 per cent.

Richardson added that a mass rollout would support a lot of the campaign agendas the organisation runs. “It’s harder to undertake any campaign or water saving if households don’t know how much water they use. Without that information it is much harder for people to reduce their consumption.”