As water companies ponder their next move on the toughest price controls since privatisation, Nigel Hawkins considers whether we could see a raft of appeals to the CMA and what approaches companies may take to argue their case.

With “Final Determination Day” less than four months away, it is salutary to consider which water companies may use their right to appeal Ofwat’s ruling to the Competition and Markets Authority (CMA).

After all, PR19 is the toughest price control the sector has faced since privatisation in 1989 – with a meagre 2.4 per cent weighted average cost of capital (Wacc) being assumed by Ofwat.

Given the very sharp reductions that some water companies will need to absorb – potentially up to a whopping 25 per cent for Northumbrian – it seems likely that some will take the risk of appealing their final determinations.

But the record of securing material concessions from the CMA is not good. Bristol went down this route for both the 2009/10 and 2014/15 periodic reviews – its pickings were meagre.

A starting point for how wide the current gap is between Ofwat and some water companies is illustrated by the table below.

While accepting that it does not address future investment requirements directly, it does show how Ofwat expects average water prices to fall, in real terms, between now and 2024/25. 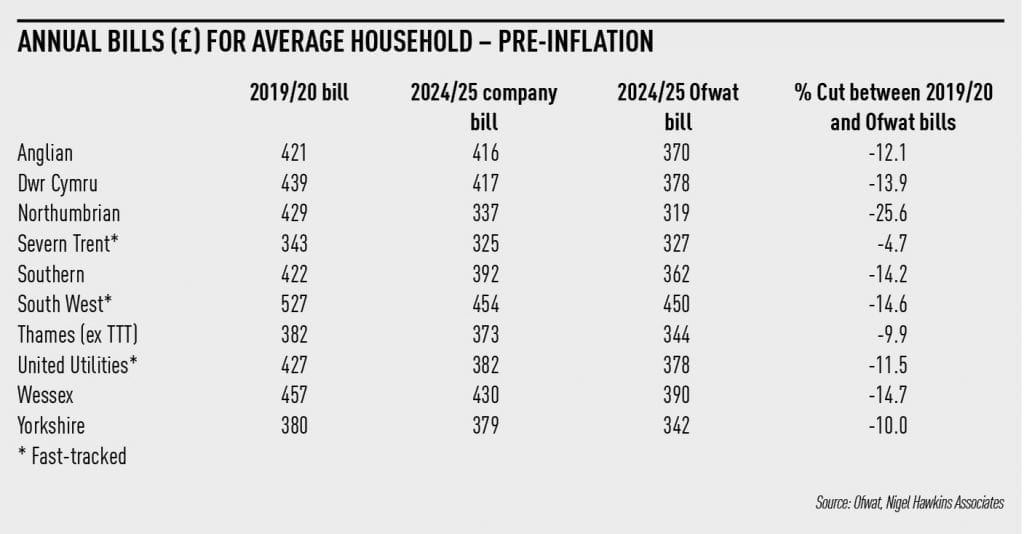 Remember, too, that with many operating costs fixed most of the revenue lost through Ofwat’s tough rulings comes straight off the earnings line.

The table records Ofwat’s price projections for 2024/25, based both on the recent draft determinations and on the figures submitted by the water companies as part of their business plans.

In Anglian’s case, this was just 1.2 per cent over five years; Ofwat’s draft determination sought a 12 per cent cut. Bridging this gap, without a CMA referral, will require major back-downs by at least one party, if not both.

Thames and Wessex are in a similar position.

Out of the ten privatised water companies, it is long odds-on that the trio who were fast-tracked – Severn Trent, South West and United Utilities – will accept their final determinations.

The other seven may all have strong grounds to appeal, given the size of the price cuts that Ofwat expects them to absorb.

There are probably three approaches these companies can use where they have a decent chance of getting change from the CMA.

First, and at a general level, they may seek to argue that the overall deal they have been given by Ofwat is simply lousy – on several counts. Some of the harsh price cuts being proposed by Ofwat would underpin this viewpoint.

This strategy may be suitable for some of the highly indebted private equity-owned water companies, who have a raft of issues to deal with, such as Thames with its net debt of over £11 billion, controversy over past dividend payments, the Thames Tideway Tunnel and excessive leakage inter alia.

Second, the issue of Ofwat’s 2.4 per cent Wacc assumption may be contested. After all, it represents a third off what was used by Ofwat back in 2014. Wessex is believed to feel strongly about the aggressive Wacc.

Ofwat would, no doubt, argue that yields on ten-year gilt-edged stock are now near record lows. Furthermore, it will have taken note that United Utilities, in particular, seemed very relaxed about the 2.4 per cent Wacc when it submitted its business plan.

Third, the Test Area Assessments made by Ofwat may have opened a veritable can of worms, especially given the regulator’s laconic – and blunt – approach in summarising many complex issues.

Consequently, some of Ofwat’s evidence behind such seemingly dismissive comments may be tested. Given that both Southern and Thames received three D ratings each, these assessments may – unwittingly – provide fertile ground for their lawyers.

Thames, for example, may take issue with Ofwat’s opinion that its “costs in water… are above our view of efficient costs by around 36 per cent”. It’s a big number – and presumably Ofwat’s draft determination for Thames took full account of this conclusion. 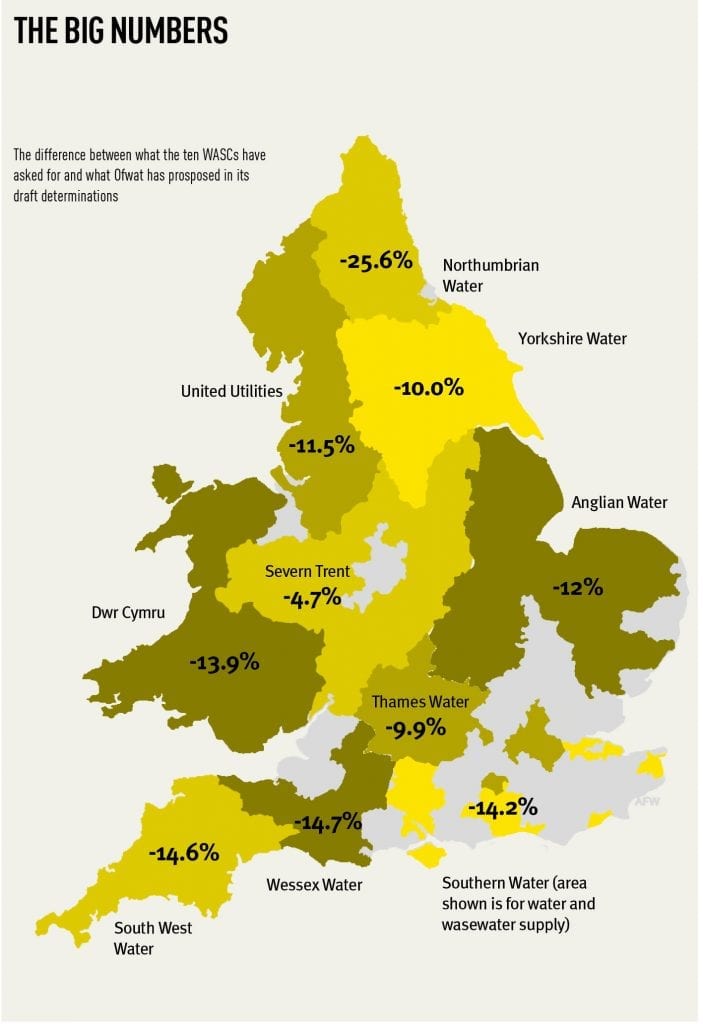 Of the seven privatised water companies that were not fast-tracked, which ones are the most likely to appeal their final determinations?

Southern, the subject of trenchant criticism recently from Ofwat over its concealed sewage leakages – not forgetting its three Ds in the Test Area Assessments – faces many challenges, especially since Ofwat is clearly unconvinced by the long-term resilience of its business plan.

Ofwat’s draft determination sought twice the cuts in average customer bills – £60 in real terms over a five-year period – over what Southern proposed in its business plan.

The Thames situation is compounded by its £11 billion net debt, the £4.2 billion Thames Tideway Tunnel scheme and a raft of other issues that Ofwat has identified, including a dreadful leakage record.

There is a case for arguing that Thames should have a once-and-for-all, Transco-style, slug-out with the CMA. After all, Ofwat is seeking a 10 per cent real cut in average prices by 2025; Thames has offered just over 2 per cent.

To be fair, chairman Ian Marchant has inherited a dire situation and will need an aggressive list of initiatives to right the listing Thames ship.

Anglian’s biggest issue is its inflated cost base. This was estimated, on the wholesale water side, at 32 per cent above Ofwat’s view of efficient costs. The wastewater premium is 19 per cent.

Ofwat is proposing a price cut by 2024/25 of 12 per cent in real terms. Anglian’s offer is just over a miserly 1 per cent. Closing so vast a gap will be a real challenge.

Yorkshire’s figures are similar to those of Anglian, especially in terms of future water bill cuts.

With Ofwat seeking a 10 per cent real cut by 2024/25 and Yorkshire setting out its stall for no material real terms price cuts, another major gap has opened up.

The Wessex situation is different, with the contentious 2.4 per cent Wacc figure being a prime case for a CMA referral.

In its Test Area Assessment conclusions, Ofwat gave Wessex a pointed reminder: “There is limited and unconvincing evidence in support of Wessex’s proposed uplift to the ‘early view’ cost of capital.”

Don’t go there, seemed to be the underlying message.

An inflated cost base seems to be Ofwat’s major concern with Dwr Cymru, which explains why it is seeking a near 14 per cent real terms cut in bills by 2024/25.

Ofwat argues that Dwr Cymru’s wholesale water costs are 26 per cent above its benchmark while the figure for retail – described as “very inefficient” – is close to a 40 per cent premium.

With Ofwat seeking bill reductions of 25 per cent in real terms by 2024/25, Northumbrian would seem to be an obvious candidate for a CMA referral. However, Northumbrian has already offered well over 80 per cent of Ofwat’s target, so the gap should be eminently bridgeable.

Overall, with the sector facing much tighter finances than previously, PR19 is pivotal.

For the highly geared companies, there will be some comfort in the belief that, whatever Ofwat throws at them, they must be allowed to retain investment grade status with the credit agencies, such as Moody’s who recently published a major analysis of the sector’s finances.

In effect, a regulatory floor is in place.

Of course, any company appealing to the CMA must also weigh up the chances of success, especially given the uninspiring record of such appeals.

Nevertheless, unless there are material movements, the most likely appellants within the privatised 10 water companies remain Southern, Thames and Anglian – and probably in that order.