Western Power Distribution (WPD) chief executive Phil Swift talks to Utility Week about his hopes for the ED2 price control, what a distribution system operator of the future will look like and the relationship with WPD's new owner, National Grid.

As we settle down in his office at WPD’s Gloucester depot, Phil Swift asks where we should start.

It’s a tricky question because 2021 has already been a momentous year for the electricity distribution network operator (DNO) for the Midlands, South Wales and the South West. 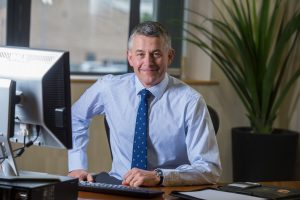 In January, WPD became the first of the DNOs to publish a draft of its business plan. This was written during a period in which its future ownership had been a hot topic in the industry, with long-term proprietor PPL Corporation having put the business up for sale in August 2020.

By the time a second, “more ambitious” draft plan was released at the end of March, that debate was settled, with National Grid having offered £7.8 billion to snap up “a significant scale position in UK electricity distribution”.

This is not to mention the ongoing challenges of maintaining lifeline services for eight million customers during a global pandemic.

If Swift feels the pressure he is certainly not showing it and professes that this is “the most exciting time of my career”.

It is a journey that stretches back to 1992 with SWEB, which formed out of the privatisation of the South Western Electricity Board two years earlier. Swift worked his way up the ranks from an engineer to eventually become part of the team that oversaw the transition of SWEB to WPD and the acquisition of networks in  South Wales and latterly the Midlands a. He took over as chief executive in 2018 after five years as operations director.

He reflects: “My son is at university now and I’ve always wondered whether he would join the electricity industry. To be honest, in the past I’m not sure I could see why he’d want to – it was very much things being done in the way they always have.

“But if you look at the pace of change now, I think it’s one of the most exciting places you could be. Just look back to the start of ED1 and the things we weren’t even talking about – the distribution system operator (DSO), connecting renewables to the system, the flexibility services we provided, the dispatch platform we created.

“Just imagine where we’ll be at the end of this decade.”

Hypothesising on how the 2020s will pan out is, of course, at the absolute heart of the business planning process for the RIIO-ED2 price controls for 2023-2028.

It’s a challenge that each DNO appears to have approached in slightly different ways. WPD has developed a base case, in addition to modelling a range of scenarios to develop a WPD “best view”. As an illustration of the range of scenarios considered, WPD’s business plan cites the potential need for expenditure to increase 102 per cent to achieve a “Leading the Way” scenario or to reduce by 45 per cent under a “system transformation” model.

WPD’s proposed base case expenditure of £6.2 billion over the five years is an increase of 18 per cent on the average for ED1 and would result on paper in an increase of £1.52 to the average domestic bill. However, after efficiencies and other factors are baked in WPD expects bills to be flat. If WPD’s “best view” comes to pass, expenditure would increase further to £6.7 billion.

Swift says: “I really am confident we’re in that right bandwidth. I’d be surprised if the pace was slower and I’d be really surprised if it was faster.”

At the centre of WPD’s plan is the assumption that uncertainty mechanisms will be needed to unlock further funding throughout the price control period. Its business plan sets out the design for its own uncertainty mechanism, which Swift says has prompted positive feedback from both Ofgem and other DNOs.

WPD’s mechanism sets out a series of volume drivers each with their own output measure. The uncertainty mechanism would be triggered annually based on the unit costs and volumes delivered.

Swift describes the process for larger scale projects as “similar but we are taking a balanced risk on those”.

He adds: “I really hope this can be something that works not just for WPD but for the wider industry. We all have a common challenge – we don’t want customers to pay for things that aren’t going to happen. But equally if we are going to be agile and react to circumstances during the price control, the process has to be there to allow us to be fleet of foot. We can’t be going back to Ofgem and presenting huge papers while people are asking – ‘when are you going to connect me?’.”

Swift believes an increasingly flexible energy system will allow DNOs to plan much more accurately into the future.

“Say you’re looking at something like a primary substation and putting in larger transformers. You probably need to allow a two-year lead time for that because of all the other moving parts. With the developments in flexibility and the way we can track the rate of growth that maybe allows us to leave that decision another year. It allows us to demonstrate much more clearly when and why something is needed.”

Or, indeed, if reinforcing the network is necessary at all. Which brings us to one of the key debates for ED2 – the DSO, and how this role aligns with that of the DNO.

Swift asserts that “without a doubt we have led the industry on DSO and flexibility” and believes ED2 will be an important development phase for the model.

However, he is unambiguous in his view that, while there is already distinct functional separation for the DSO within WPD, the model is not yet ready for full separation.

He explains: “WPD is well on the way to demonstrate the complete independence of DSO and DNO decision-making within our overall business. Independent governance is something we’re totally on board with. We’re willing to have some form of independent review on an ongoing basis. The more we can show that the decisions being made are the right ones, the less suspicious people will be and the more trust they have that we’re doing the right thing.

“But, in terms of full separation, right now would be the wrong time to do that because of the huge challenges we’ve got ahead of us in terms of the decarbonisation agenda. We believe we are demonstrating independence while avoiding incurring the costs of duplicating large parts of our capability, including IT costs in particular. To introduce a whole new raft of interoperability now would not serve our customers well. We’ve got to demonstrate that we can deliver what stakeholders want. Let’s get on and do that and then we can talk about structures.”

Swift continually returns to the theme that he can talk with confidence about what his customers want because they have told him directly.

“Stakeholder engagement” is a term littered throughout the DNO business plans but Swift insists it cannot be an empty phrase.

He points to 19,000 direct stakeholder engagements and clarifies “these are proper interactions, not just a card through the letterbox and a tick in the box”. In all there were 3,000 formal responses to the business plans.

He says: “The key steer from the regulator was that this plan needed to be co-created. So, we literally started with a blank sheet of paper.

“When we put the plan out in January that was the first time we had crystallised all those stakeholder inputs into one place. Rather than assume we had got that right, we decided to pull together what we had and check with people – have we understood you, is this what you want.”

The move put WPD in the spotlight – and to some extent the firing line. Duncan McCombie, the outspoken chair of the networks’ customer engagement group (CEG) called for WPD to be “more radical or ambitious”, saying most of its commitments only represented “incremental change from those currently being delivered in ED1.”

Swift claims he welcomed the robust feedback and points to a decisive response, including ramping up the ambition on decarbonisation by committing to become net zero by 2028 – 15 years earlier than indicated in the first iteration of the business plan.

“In some areas the output expected was clear but the timescale wasn’t. That was what happened with net zero. There was a definite change in the country’s ambitions on net zero during that time. We were consulting with councils who were saying to us – we’re looking at 2030, why aren’t you?

“We were first of all given this bandwidth of between about 2030 and 2050 and then, when we pushed people further, it became clear they supported us having a much more ambitious drive.

“What is really important for me is that we were able to quantify the financial impact. You can’t separate the financial implications otherwise it’s a meaningless conversation. Of course people want you to be as ambitious as possible if they’re not aware of any consequences of that.”

Swift says that ambition is something WPD shares with its new owner and expects the complementary skills the tie-up brings can help them achieve more together.

He adds: “PPL were an excellent owner and one of the key components of that was the trust they had in the UK operation but also the long-term nature of their investment. National Grid absolutely share that.”

We meet just a few weeks after the Competition & Markets Authority cleared the transaction so it is understandably that Swift becomes decidedly more tight-lipped at this point in the conversation. He declines to wade into the debate about the premium paid by National Grid and whether that undermines arguments about the cost of capital in energy, simply adding: “We are focussed on how financeable WPD is and we will be taking due stock of the CMA current and final position (on the appeals by gas and transmission networks).”

National Grid has previously told Utility Week it will adopt a “light-touch” approach to seeking synergies with WPD and Swift says this is his understanding too.

“Like our previous owner we will be a business unit within the group. We are very closely aligned in our vision for the future and driving the transition towards net zero and a smart energy. But  it is too early to be specific on potential synergies because Grid’s UK experience is transmission and ours is distribution  so while complementary, the core roles and functions we undertake differ in order to meet the needs of our customers.”

He insists that the new owners are keen for the takeover not to distract Swift and his team from the important work in front of them, in terms of overcoming the challenges presented by Covid and submitting a final business plan to Ofgem in December.

“The attraction of us to them is clearly that we are at the heart of the energy transition. There’s a huge amount to achieve over ED2 and we’re itching to get on with it.”