There has been no sight yet of the £9.2 billion pledged to spend on energy efficiency measures in the Conservative manifesto. But with organisations from all sides calling for urgent action to decarbonise the existing housing stock and create green jobs – could energy efficiency finally start to be taken seriously? David Blackman reports

Apart from beating Covid-19 and supporting the NHS, at times it seems like energy efficiency has been the only issue that has united Britain over the past year.

All of the major political party manifestos at the last

general election contained a pledge to improve home insulation. And since the pandemic struck in March, energy efficiency has emerged as the lead theme in the post-lockdown stimulus packages that a host of organisations have presented for reviving the UK economy.

But while there is no doubt a pressing need to grasp the nettle on energy efficiency, delivering a successful programme is another matter.  The path to better insulated and lower carbon homes is strewn with failed policies and rollouts – not least the disaster that was the Green Deal. Over the past decade progress has gone backwards. But more of that later.

The commitment to reach net zero by 2050 means that the UK cannot afford to bury its head in the sand in terms of tackling carbon dioxide from the existing building stock, which accounts for 40 per cent of all emissions and helps keep 2.5 million households in fuel poverty. What’s more, energy efficiency investment also has the potential to unlock substantial long-term economic returns – for every £1 spent on insulating the fabric of a building, £3 is generated in economic benefits.

Lord Deben, chair of the Committee for Climate Change, outlined the job creation benefits of energy efficiency at a recent meeting of the Net Zero All Party Parliamentary Group. He said: “The advantage is that it’s not just for the south and the east: the whole of the country can be given new jobs if we put our resources into a proper programme for energy efficiency.”

As James Diggle, head of energy and climate change at the CBI observes: “It’s one of the fundamental things you need to get right down to net zero. We might as well do it sooner rather than later and we can use that to alleviate joblessness in the short term.”

The added twist in the wake of the pandemic is the health benefits that energy efficiency can deliver. And while the current phase of the pandemic has hit as the weather has been warming, next winter is likely to see a second wave.  Peter Smith, director of policy and research at National Energy Action, says: “If we have an unhappy overlap between another outbreak of Covid and a cold winter, the chickens will come home to roost.”

Joanne Wade, deputy director of the Association of Decentralised Energy shudders at the prospect of respiratory conditions being exacerbated by poorly insulated buildings. And while heating may have been the last thing on people’s minds in this week’s sweltering conditions, it will be a different story this autumn if many of us are still working at home, says Simon Markall, head of public affairs and engagement at Energy UK.

“When it comes to the depths of winter, we will suddenly be turning the heating on because we are here all day: energy efficiency then becomes pivotal because it’s the thing that keeps customers’ bills down.”

However, just because it’s a sensible idea, doesn’t mean that energy efficiency will automatically take off. As Peter Smith of National Energy Action observes: “We’ve been here before.”

Bim Afolami, chair of the Praseg renewable energy APPG says: “Energy efficiency is key but there needs a very practical road map. There’s no point setting rules and there not being the people or money to do it.”

So, what needs to happen to ensure that the aftermath of the current crisis doesn’t turn out to be yet another false dawn for domestic energy efficiency?

“Once access to the loft is negotiated, it can be done in very self-contained way with PPE,” says Smith.

And Wade says that if the home is spacious enough, partitions can be erected in rooms where wall cavities are being filled in so that the householder can get on with their lives.

Protocols have even been developed to ensure that householders should not feel pressured to let installers into their properties by rebooking appointments as late as the scheduled day, says Smith: “If the householder is not comfortable they can blow the whistle. If they can do that, there is no reason why energy efficiency installations can’t be done in a safe way.”

The sector has tried to provide further assurance by developing Trustmark code of practice, which has been introduced following criticism of the shoddy installations delivered under the coalition government botched Green Deal programme. Smith says: “It gets over issues there have been in the past with poor quality installations.”

But even before the pandemic bit, confidence was pretty fragile in the energy efficiency supply chain, unsurprising given the rollercoaster ride it has seen in recent years.

After a spending boost delivered by the last Labour government, the CCC calculated this week that the annual number of installations has crashed to an estimated 90 per cent of 2012 levels as the Green Deal programme backfired spectacularly.

Since then, the main support for energy efficiency programme has come from the industry funded and organised Energy Companies Obligation (ECO) scheme, the level of which has plummeted in recent years.

Guy Newey, strategy and performance director at the Energy Systems Catapult, recently told MPs that the experience has been “tremendously disillusioning” for the industry’s supply chain.

Given this chequered background, Wade argues that the battered supply chain now needs a combination of short-term action and long-term policy clarity. If this happens, she is confident that the supply chain can meet the more demanding targets.

“We have a sector that wants to deliver but is lacking in confidence that there is a market,” Wade says, adding that the energy efficiency installers has proved in the past that they are able to rapidly respond to increased demand for their services.

The pressing issue now is to take steps to prevent the industry’s supply chain from unravelling, she warns.

The energy efficiency industry is reliant on a host of small-scale contractors. These companies may have secured a respite during the lockdown through the employee furlough scheme but will nevertheless be at risk of going under unless they can secure new orders, Wade says: “It (spending) has to start now because otherwise we are in severe risk losing the skill base we already have in the industry. It’s all very well £9.2 billion being there somewhere in the kitty but it needs to be produced now or people will be at risk of losing their jobs.

“They haven’t got the resources to hang on.”

The CBI’s Diggle agrees. “SMEs are particularly struggling so if there was an indication of a pipeline of work at the end of this crisis. It could help some of these companies to hang on.”

In its paper, the CBI urges the government to deploy its spending to establish a pipeline of work for these battered SMEs.

Bringing forward this tranche of funding would enable councils and housing associations to start work on implementing mass home upgrade projects. The CBI also urges the government to use some of its proposed £2.9 billion pot for improving the energy efficiency of the public estate to upgrade school buildings while they are closed.

Such work would be less disruptive than normal, it says: ‘With a phased return to schooling likely, there is a clear opportunity to target buildings that will be empty until the autumn, delivering immediate employment over the summer months.’

Funds can be directed to local authorities through section 21 grants even before a statutory grant framework has been established, points out Smith.  Longer term though these companies must have the confidence that this pipeline is not a “one-off pot of money” that evaporates in a few months, says Wade, adding that this will encourage companies to invest in training.

“Private funding will take over eventually but you need to get confidence going first and build demand at the same time.”

The existing ECO scheme can feed into wider energy efficiency efforts, she says, which could be led by local authorities on a more area by area basis rather than the more piecemeal approach to properties

Establishing this pipeline will also give the government time to work up its plans for how to encourage home-owners, who make up the biggest chunk of the housing market, to upgrade their properties, with incentives such as VAT reductions and cut-price mortgage rates. 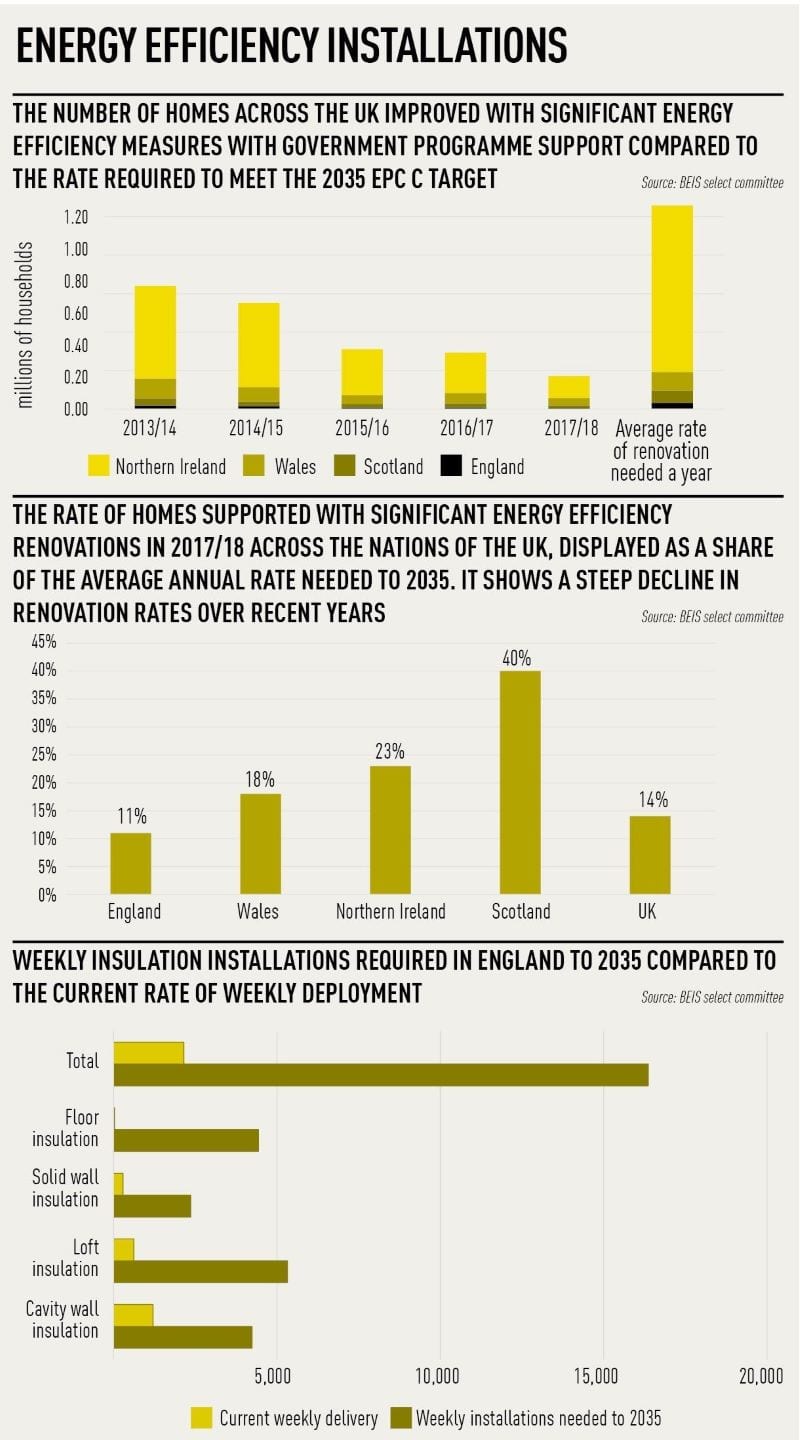 The only surefire way to secure this pipeline of work though is to give statutory force to the government’s target that all homes should be brought up to EPC (energy performance certificate) Band C by 2035, says Lord Foster.

The Liberal Democrat peer, who has introduced legislation designed to give do just this, says: “It’s not tougher targets but just putting into legislation what they have already said they would do.”

Lord Foster believes that energy minister Kwasi Kwarteng “definitely” supports the objectives of the bill. And the energy efficiency community are satisfied that the department for business, energy and industrial strategy (BEIS) is behind efforts to improve energy efficiency.

Even the Treasury, which has traditionally been a bulwark of resistance to energy efficiency improvements, is making the right noises, says one energy efficiency source. “To a greater extent, they recognise that this is activity that stimulate jobs and get things going quite quickly.”

However, March’s Budget contained no down payments from the £9.2  billion promised for energy efficiency in the Conservative election manifesto. One reason given for energy efficiency’s no-show in the Budget was that the government had yet to publish its National Infrastructure Strategy, which is meant to contain proposals for taking forward national energy efficiency programme.

Another was the wider impact of the pandemic on government work, says Utility Week’s source: “The reason cited was the clear focus on Covid and providing huge amounts of support to address the immediate effects of the crisis where money and civil service capacity went.”

And it would have sent out mixed messages for the government to start spending money on intrusive measures just at the very point when entering peoples’ homes was just about to be banned.

However, the blockages also stem from the “higher echelons” in No 10 Downing St, says the source: “Dominic Cummings is looking for the next big shiny things and it (energy efficiency) is not as sexy as technological or glamorous projects.

The short-sighted element to this though is that better energy efficiency is the precondition for the transition to a smarter and more flexible system, says Wade: “The government hasn’t recognised how fundamental this is to the future.”

Buildings that retain heat better will create smaller surges in demand for electricity on those cold winter evenings and mornings when the greatest fluctuations in demand take place. In addition, they will create spaces that can be warmed up less rapidly with heat pumps

Wade says: “The transformation they want is not going to be affected unless they have a building stock that is low energy. They don’t fully understand that this lays the foundation for everything else they want to do in the energy system.”