Greater flexibility could cut energy system costs by £16.7 billion per year by 2050, according to new research from the Carbon Trust and Imperial College London.

The report said flexibility should be embedded into all sectors of the energy system – power, heat and transport – to reduce the impact and cost of their decarbonisation.

The findings are based on modelling of three core pathways for achieving net zero emissions by 2050 as well as a number of additional scenarios and sensitivities. The core pathways are characterised by their solutions to the decarbonisation of heat.

Heat networks supplied by ground-source and water source heat pumps meet 20 per cent of heat demand in all three of the core pathways. However, in the hydrogen heating pathway the majority of the rest is met by hydrogen boilers, whilst in the electric heating pathway nearly all of the remainder is met by small heat pumps.

For all three core pathways, the report modelled a low flexibility scenario, in which battery storage and interconnector capacity hold steady at 1.1GW and 11.7GW respectively, there is no demand-side response and thermal energy storage remains limited; and a high flexibility scenario, in which there are much greater amounts thermal and battery storage, interconnector capacity rises to 20GW and there is widespread demand-side response from various sources. 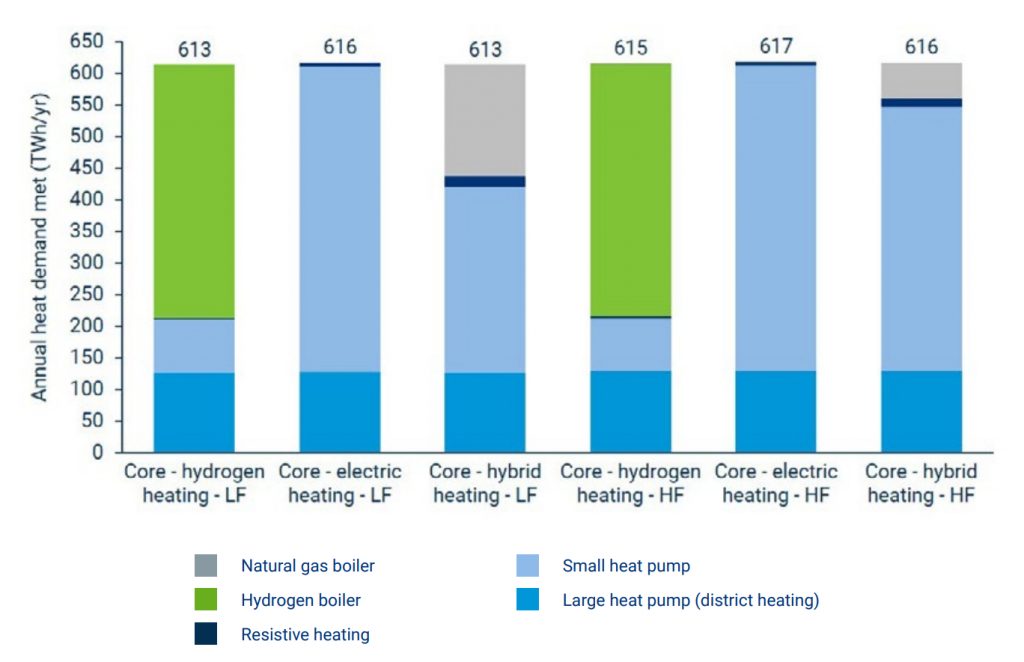 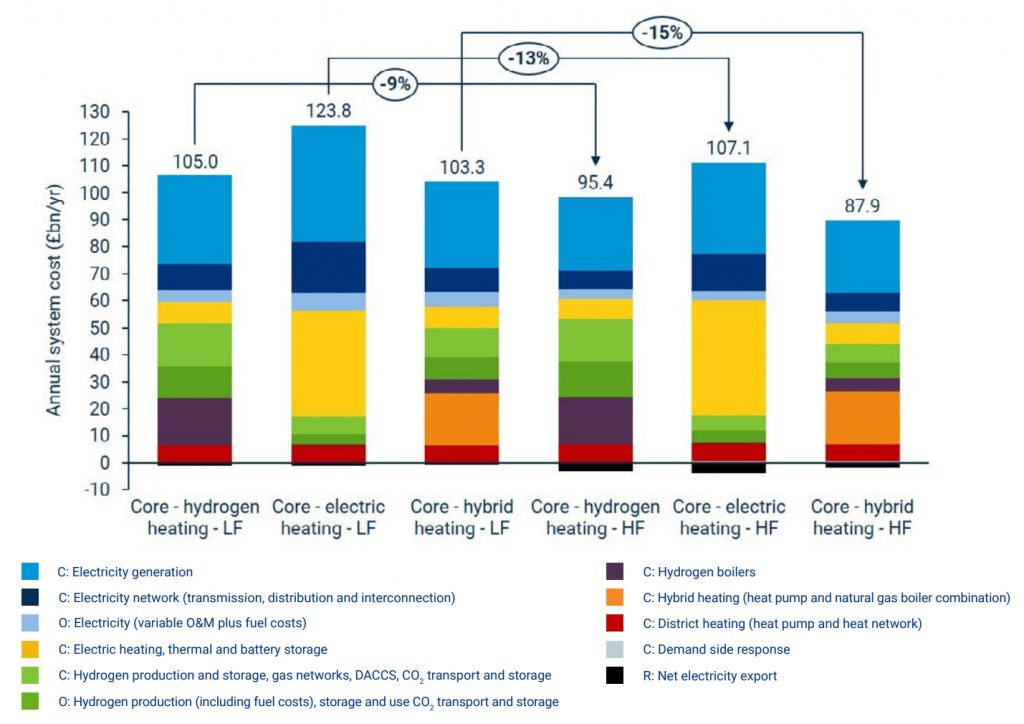 The deployment of renewables would also be fairly similar across all three core pathways. However, the electric heating scenario would require much more backup generation and storage to meet peaks in demand during extended periods of low wind and solar output. Along with the requirement for more extensive electricity network reinforcement, this is the main reason for the higher annual costs in the electric heating pathway when compared to the others, as well as the lower costs in the high flexibility scenarios. 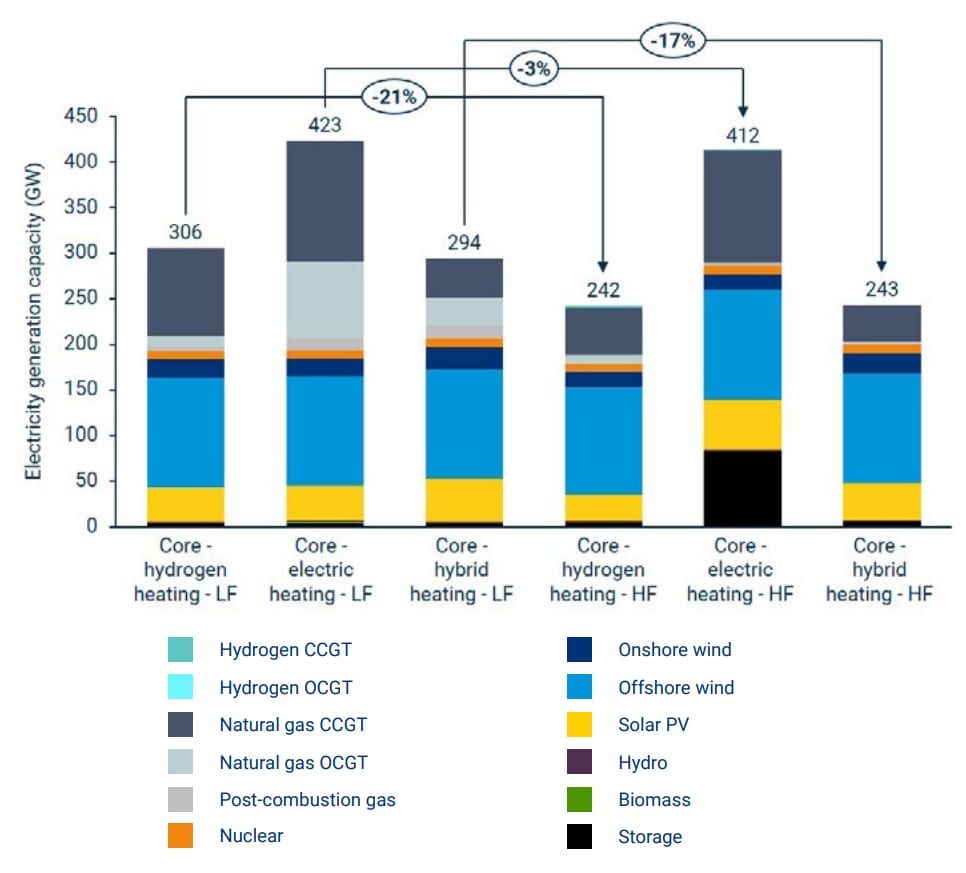 The study additionally explored a sensitivity in which all hydrogen is produced using electrolysis, powered by either renewable or nuclear generation. The analysis found this would substantially increase annual energy system costs, bringing them much closer in line with the electric heating pathway in both the low and high flexibility scenarios. 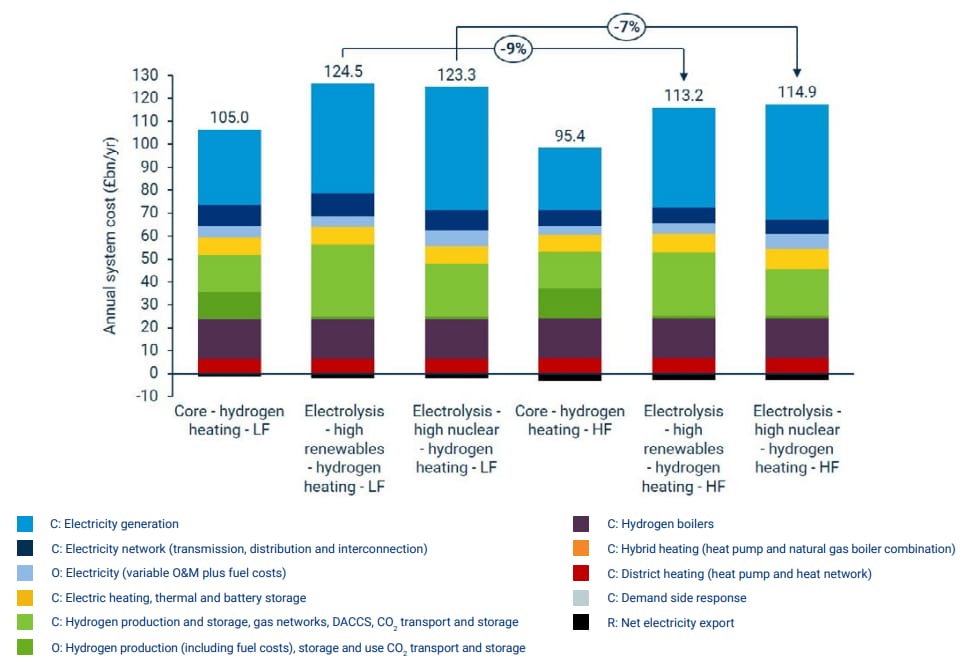 The report authors highlighted the substantial value of flexibility across all of the numerous scenarios it explored, describing it as a “no regrets” option and calling for it to be treated as a “core infrastructure challenge”.

They said policymakers should seek to preserve existing sources of flexibility such as hot water tanks in homes and act now to maximise future flexibility, for example, by embedding it into smart appliances and building standards. They said consumer engagement and confidence will be critical to scaling up deployment, which will require business models that capture its value and overcome acceptance challenges.

Carbon Trust chief executive Tom Delay said: “Flexibility is vital to unlock value and it is the most important ‘no regrets’ action that can be taken as the UK moves to decarbonise heat, transport and industry, saving billions in investment and operating costs.

“It’s critically important that industry, business, consumers and the public sector understand the value of flexibility and the benefits that flexibility brings to the British economy. Flexibility always delivers – we should invest in it now.”

Baroness Brown of Cambridge, the trust’s chair, commented: “This in-depth analysis examines the different uncertainties the net zero transition throws up and offers a comprehensive evidence base on the role and value of energy system flexibility under different energy system futures.

“The report demonstrates that energy flexibility can reduce the cost of meeting net zero and mitigate the impact of wider changes in the energy system, ensuring we reach net zero efficiently, effectively and at lowest cost.”

The report was funded by a consortium of project partners including EDF, UK Power Networks, Scottish and Southern Electricity Networks, SP Energy Networks, Western Power Distribution, Kiwi Power, the Institution of Gas Engineers and Managers, Bryt Energy and Statera Energy, all of which provided input to the report.

Input was also provided by Ofgem, the Department for Business, Energy and Industrial Strategy, the Climate Change Committee and National Grid Electricity System Operator, among others.