Ground source heat pumps could play much more than the “niche” role in the decarbonisation of heating that is often assumed by policymakers, Regen has argued in a new report.

The not-for-profit consultancy said they have significant advantages over their air source equivalents, requiring less electricity both annually and during winter peaks, while offering opportunities to store thermal energy in the ground and utilise sources of waste heat.

The report, sponsored by the manufacturer and installer Kensa Group, said “the way costs, disruption and risk of each pump type are typically presented leaves GSHPs looking significantly more expensive or challenging.

“The cost and disruption associated with investing in a private ground array to serve a single dwelling or building represents an obstacle for the majority of householders and indeed domestic heating engineers.” It said energy system modelling has reinforced the perception that “ASHPs will be the dominant technology and GSHPs will remain niche.”

However, Regen said the emerging use of shared ground arrays “developed and financed as a new utility similar to the gas or water networks” is challenging this “received wisdom”. Linking households to a common network for which they paid an annual fee – “the equivalent of the gas standing charge” – could make the technology accessible to many.

“Ignoring the potential for shared ground arrays in flats and terraced housing discounts GSHPs as potentially appropriate solution for 49 per cent of the housing stock in England,” the report stated. “In fact, it could be argued that it would be more challenging to serve these homes by siting an ASHP outside for a terraced house or flat.”

It said social landlords, which have been early adopters of this model as owners of multiple properties and adjacent land, have found that “sharing the cost of installing a ground array amongst tens or even hundreds of homes, reduces the cost, hassle and risk per unit, making GSHPs a much more attractive prospect.”

In a “high electrification” scenario, where most where most domestic heating is provided by heat pumps, Regen said that GSHPs “could make up 80 per cent of the total heat pumps, rather than the 10 per cent often assumed in future energy scenario planning”.

The report said they could also be delivered at a “comparable” cost to air source heat pumps, noting that due to the smaller market size currently, they have “greater potential for cost reduction”.

“Given the right support to scale up, the GSHP industry can deliver product improvements and cost reductions that will bring costs in line with ASHPs.” It said that appliance costs could be reduced by 50 per cent, leading to a 40 per cent reduction in the price of first-time installation.

And Regen said there are good reasons to opt for ground source heat pumps, noting that: “The UK can often see weather conditions that prove challenging for ASHPs, with high humidity around freezing point causing icing of evaporating coils, reducing output or efficiency.”

It said although ground source heat pumps do see “slowly declining performance over the course of a heating season as energy is extracted from the ground,” they are not directly impacted by air temperature or humidity.

“The efficiency of the system is dependent on the ground temperature, which is typically around 10C in the UK, regardless of ambient conditions,” it explained. “This gives GSHPs a higher seasonal and cold day efficiency than ASHPs.” 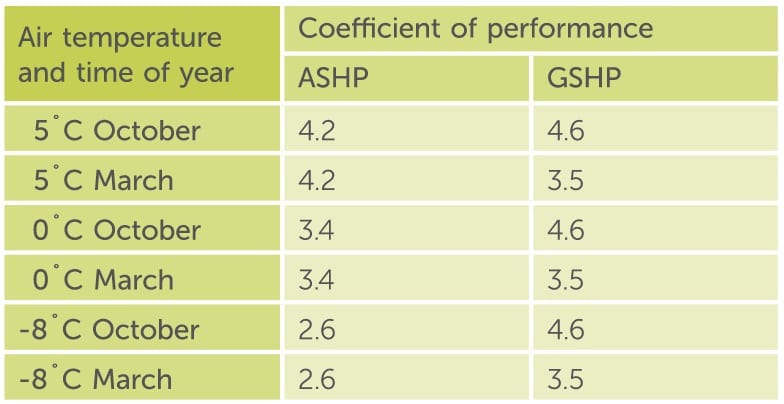 Note: Above figures represent averages of data provided by manufacturers

Regen also highlighted the ability to use the ground as a form of thermal storage: “Individual GSHP systems can boost these efficiencies by the using the system to provide cooling in the summer, increasing the ground temperature at the start of the heating season. Larger systems that share ground arrays are able to connect to local sources of waste heat to improve system performance all year round.”

The consultancy said these represent “significant advantages in the context of the goal set in the energy white paper to minimise the costs to the electricity system of the electrification of heat”.

“The potential role of GSHPs has been underestimated,” said Regen director Johnny Gowdy. “With a new system design based on shared infrastructure, and supported by a utility style finance model, GSHPs could revolutionise how we heat our homes and businesses.”

Kensa Group chief executive Simon Lomax commented: “This important report from Regen draws attention to the ever-increasing appeal of ground source heat pumps and argues that ‘split ownership’ business models, where the cost of the ground array is divorced from the cost of the heat pump, will allow the technology to compete favourably with air source heat pumps, particularly when delivered on a ‘street-by-street’ basis.

“The enhanced efficiency, reliability and durability of ground source heat pumps will enhance performance and benefit the householder, the electricity system, the environment, the government and UK plc.”