Living Lab volunteer homes are most likely to be smart-heated, detached, family households in England using a gas boiler, according to new data released by the Energy Systems Catapult to mark its test environment growing beyond 1,000 UK dwellings.

Established in 2017, the Living Lab has been developed by the Energy Systems Catapult as a test environment where industry innovators can design, market-test and launch energy products, services and business models in volunteer homes. 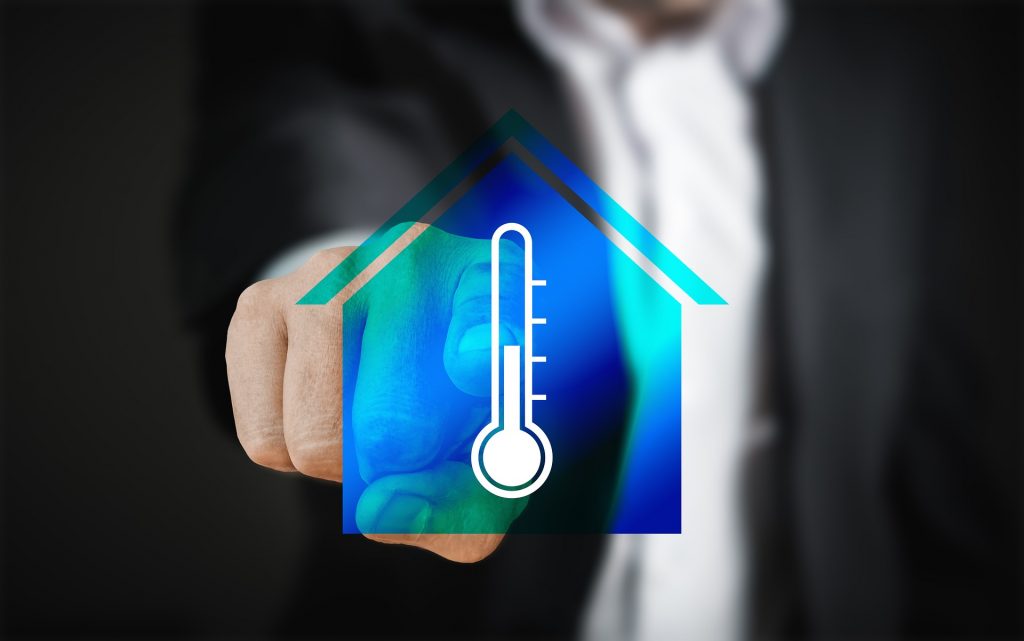 Homes are connected to trial curators via a digital platform allowing innovations to be tested in real-world conditions alongside existing mainstream technologies that households are slowing acquiring.

“We’re building a diverse community of residential properties of all shapes and sizes, and with different heating technologies installed, to give us a unique insight into our changing energy demands throughout the net zero transition.

“This insight into our evolving energy habits – and how consumers and the market respond to new technologies – will be crucial to encourage innovation and help us design products and services for the future energy system.”

Which tech is on trial? 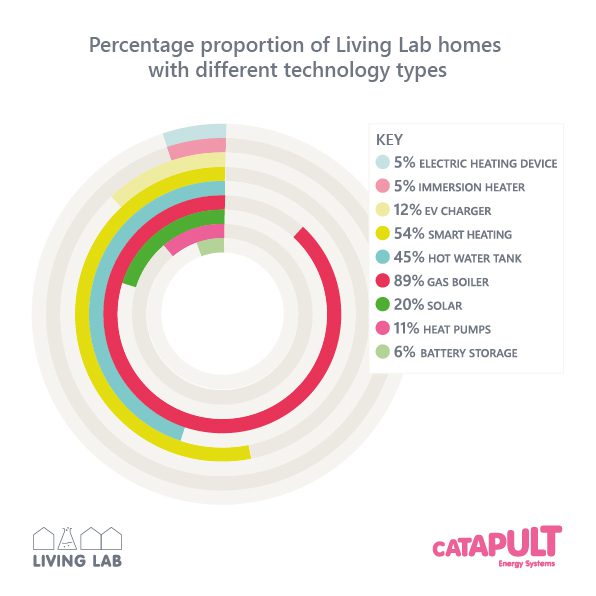 According to latest figures, while more than half of the homes in the Living Lab have adopted smart heating (54%), the majority (89%) are equipped with gas boilers compared to 11% using heat pumps.

The same data also found that 5% of homes use electric heating devices and electric heaters, while 45% have a hot water tank. 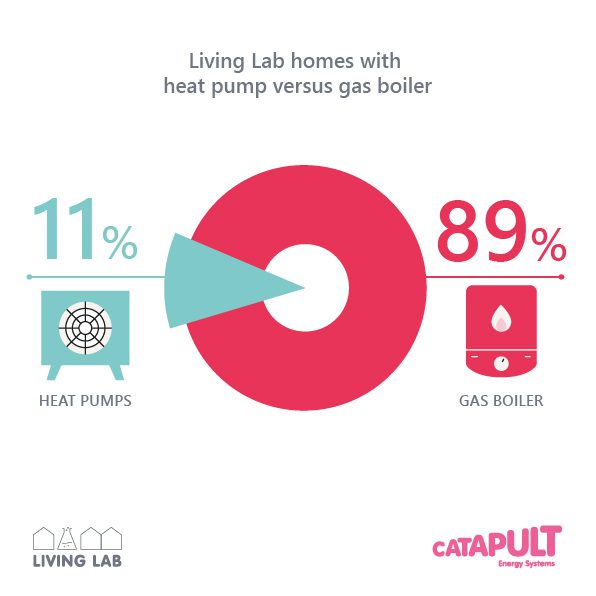 “Often we do targeted recruitment of households with specific technologies – we have done this for EV’s and for heat pumps – so that we have a good size cohort of homes with certain technologies that innovators can come and test their products or services with – for example, innovators wanting to test digital flexibility platforms,” Sweeney told Utility Week Innovate.

“As a result, we have a larger number of homes, proportionally compared to the general population, that have low carbon tech, such as heat pumps.”

Energy Systems Catapult data also revealed that more than half of households signed up to the Living Lab are families – representing 52% of the overall total – and that approximately a quarter (27%) of volunteer households are couples. 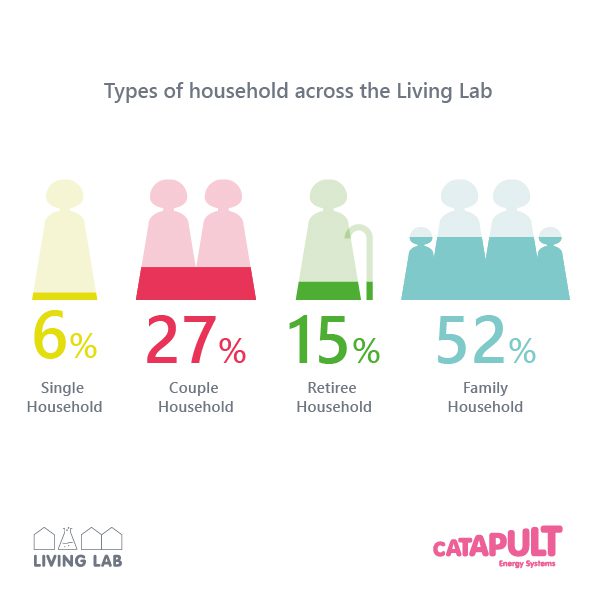 However, while generational challenges are often flagged as a potential obstacle to the rollout of smart technology, Living Lab’s first 1,000 homes were found to feature more than double the number of retirees (15%) as single person households (6%). 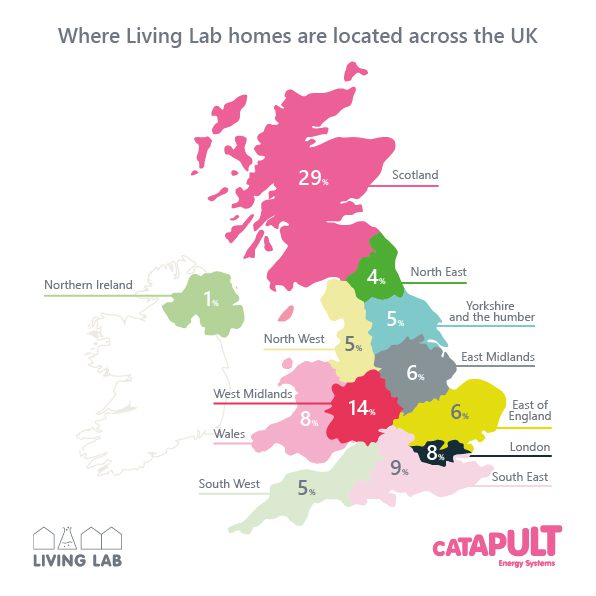 Additionally, 62% of Living Lab households – more than 660 homes – were found to be in England, with the West Midlands and south east the sub regions featuring the most volunteers, with 14% and 9% of the overall total respectively.

There are also more than 300 Scottish homes – 29% of the total – signed up to the test environment, compared to almost 100 in Wales and 14 homes which have recently been connected in Northern Ireland.

In terms of property type, detached and semi-detached properties make up 29% and 28% of the Living Lab’s homes respectively. Almost one-in-five (18%) of volunteer homes are mid-terrace and 8% are end of terrace houses, while around 7% are flats and 6% are bungalows – with the remainder a mix of maisonettes, park homes and linked detached properties.

“Energy Systems Catapult recruits participants for the Living Lab through a number of channels, and people join us for a range of reasons,” Sweeney added.

“For example, we have attracted a cohort of early adopters who are keen to test and feedback on the latest low carbon technologies. But we also ensure we have a large number of people who are not tech savvy or households who want to be able to do ‘something’ to help tackle climate change. 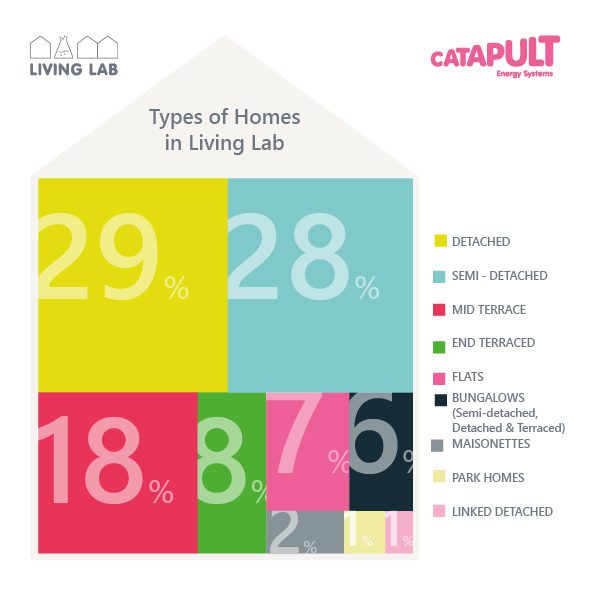 “We have a proportion of households in the Living Lab that struggle to pay their bills, or who have health conditions made worse by the cold, and we are also working with Research Institute for Disabled Consumers (RiDC) to recruit people in the Living Lab from their panel,” Sweeney continued.

As well as being a test environment for smart technology, the Lab also provides nationwide capability to test and demonstrate market arrangements, policy and regulations with real consumers, and recently formed part of a world-first energy innovation test and evaluation facility – the Whole Energy Systems Accelerator (WESA).