A Thames leakage technician called Dean Vine has donated and delivered food parcels for NHS workers and elderly people around Kent to help those who cannot get to the shops during the lockdown. 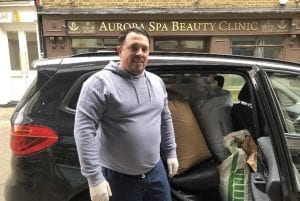 With his wife, Vine spent £1,700 on groceries to support vulnerable people in Gravesend and Northfleet.

He said he was inspired to help others when he saw an elderly woman crying in a shop because she was unable to buy painkillers after panic-shoppers had stockpiled them.

“I had a few other shops to go to and managed to get some aspirin for her at a pharmacy. She was so grateful it was like an epiphany moment,” Vine said. “She said there were so many other people in her complex, with no family, in the same position as her, struggling to get what they needed.”

Since that moment Vine has shopped for dozens of people who contacted him through Facebook and community groups. He hopes to inspire other people to do the same in other towns and communities.

Inspired by Vine’s actions, Thames donated supermarket vouchers to continue the good work as well as doubling its contribution to its Trust Fund to £1 million. The fund provides debt advice and grants for essential household goods, including washing machines, fridges and beds.

Steve Spencer, Thames’ operations director, said: “I see examples of our people going the extra mile for our customers every day, but what Dean and his family are doing to support those struggling to get by during the lockdown is truly exceptional.

“I am extremely proud to be part of our operational business, in which our dedicated front-line teams are out in the community, performing the essential role of keeping taps running and toilets flushing.”