The Met Office is working with water companies to explore the way households are using water and the changes since March. Weather analytics team manager Malcolm Lee explores the challenges to water supply and how lockdown trends can inform future consumption patterns

It would not be unreasonable to suggest that 2020 has been an extraordinary year so far for many reasons. The UK has enjoyed its sunniest spring since records began in 1929, the driest May on record for England, and the second driest for Wales. A stark contrast to the extreme rainfall observed during winter.

Aside from record-breaking weather, measures to contain and reduce transmission of Covid-19 continue to impact the activities of society and have had some unexpected outcomes.

Since 23 March demand for electricity has decreased significantly, with the increase in domestic consumption outweighed by reduced industrial demand. The change in demand along with the weather conditions earlier this year played a central role in the mix of electricity and the National Grid responded by taking the four remaining coal-fired power plants off the electricity network. As a result, no coal was used to generate electricity in Britain between midnight on 9 April and 11pm on 16 June. At the time of writing, Britain’s record for coal free electricity stood at 67 days, 22 hours and 55 minutes, smashing its previous record of 18 days, 6 hours and 10 minutes set in June last year.

What data tells us about the unusual water usage in lockdown

The impacts of the current Covid-19 restrictions are also being felt in the demand for potable water. Many water companies are observing noticeable changes in water consumption. Both average consumption and the variability from day to day are showing features not normally observed.

Working with the water companies the Met Office science team has identified the following key trends in water consumption during a lockdown. 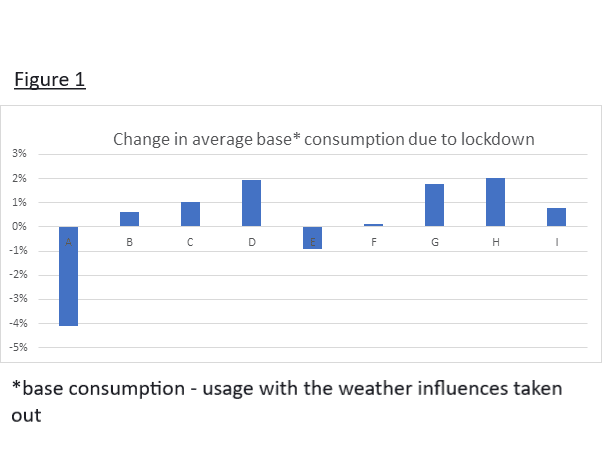 The impact of the closure of business and industry can be seen largely as this one-off change happening at the beginning of lockdown.

Having taken that into account the further day-to-day changes in overall water demand can mainly be attributed to variations in domestic usage. Three features dominate, as illustrated in Figure 2:

Together, these features point to water usage having become more sensitive to the weather, the weather being the main driver of day-to-day variations in usage. For example, an increase in temperature appears to be causing a higher rise in water demand than it used to pre-lockdown. The figure shows an inexorable rise in usage to around 30 per cent above base usage by late May, around the peak levels seen during the hot summer of July 2018. A more normal change for late May would be 15 per cent in a fine weather year.

A little consideration of the weather during lockdown goes a long way to explaining the patterns observed. The start of lockdown coinciding with warm, sunny weather has a large part to play, with people confined to home able to work in their gardens. This introduced a ‘fine spring weekend’ effect to every day. Cleaning up after winter, pressure washing paths, some garden watering and entertaining children will have all played their part in exacerbating the impact of weather on usage.

Water companies use scientific models to anticipate future water demand. However, established models for predicting usage rely on historic use patterns pre-COVID. These models are not performing as well as they used to because they don’t account for the unusual trends during the lockdown. This has created new operational challenges for water companies. Even though they have enough supplies in their reservoirs after a particularly wet winter, they are unable to treat and pump water out fast enough to meet the unexpectedly high demand at peak times.

Working together to help keep the taps flowing

Water demand models must be adapted to reflect current reality and to help water companies predict demand levels with accuracy. Industry working together can make this happen quicker and more effectively. Over the past few weeks, the Met Office has come together with a group of water companies to pool their data and evaluate the demand being observed.

Nick Law, senior account manager at the Met Office, who chairs the sessions said it was inspiring to see how the water companies are coming together to tackle a shared problem has been inspiring. Based on the pooled water demand data, we are able to produce a Covid sensitive model, that the water companies can use to adjust their demand forecasts. It can also be used in scenario planning where we can simulate the compound effect of lockdown and another hot period in later in the summer.

This conformity can be explained by the good weather extending over the whole country during April and by the lockdown reducing differences in how various population groups use water, after changes to base usage have been accounted for.

This commonality enables us to use the smaller sets of data from various water companies as the combined larger set, known as data pooling. As a result, the validity of the relationships created is more certain and generally applicable than if the data from water companies were analysed separately. Therefore, a single model becomes applicable throughout the country.

What can be done to better prepare for the future?

So, what of the future? The expectation would be that as lockdown eases, more normal usage patterns should start to return; this would necessitate the use of a hybrid model. Thankfully what we now possess is a better understanding of what to expect should a tighter lockdown become re-imposed.

However, this year’s forthcoming summer months, particularly August, might bring challenges. Normally the population movements due to school holidays bring noticeable and well-understood increases in usage for some water companies and decrease in usage for others. This year it may be different, with the normal July scenario extending into August. The companies that normally experience a noticeable drop in usage during holidays in August, could experience an increase in water demand due to a combination of lockdown and spells of warm and sunny weather during summer.

What can be done to better prepare for the future?

Based on the modelling of April, May and June data, we can perform scenario planning for an extended lockdown for different weather types in July and August. This will allow companies to perform proactive contingency planning. Analysis of possible demand for the summer given different weather scenarios will help them prepare for the worst-case situation with a strict lockdown and a very fine August.