Mark Cooper, who heads up smart metering at Thames Water, describes reaching the milestone of half a million devices as a 'gamechanger' for the company and for the environment. He talks to Utility Week about the progress and challenges of the programme.

Thames was the first UK water company to begin widescale deployment of fully smart water meters, known as AMI or advanced metering infrastructure. These differ from the automatic meter reading (AMR) such as drive-by reads that have been adopted more widely across the country, which are themselves a significant step up in terms of usage data compared to manually reading meters in the street.

Over the past six years the company has increased its meter penetration from around 34 per cent to 49 per cent, which Cooper explains was compulsory under the water resource management plan.

“Metering really is the cornerstone of our strategy around our water resources management plan,” Cooper says. “It’s about really punching home the message of taking less water from the environment and securing water supplies for future generations.”

Moving customers to a meter generally results in water savings, however Cooper says the granular level of data gives further incremental saving when moving to an AMI smart meter.

“We hope to move up from what is a standard 12 per cent saving going from unmetered to metered and pushing that up to 15-17 per cent saving with the smart meters by giving customers an additional view of their usage.” 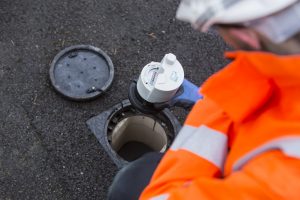 The data available to Thames on usage has shot up from the two million reads from the ‘dumb’ meter estate the business previously had access to, to 12 million every day.

The company celebrated a half million milestone in April, which was possible thanks to Arqiva’s radio network of 106 masts across the capital which the AMI meters communicate with to feed back data.

Cooper explains the data is valuable beyond simply understanding what a household is using: continuous flow indicates a leak in a home, driveway or path. The company then engages with customers in a new way to tell them what the impact on their bill is of continuous flow and to encourage people to check sinks and toilets for any problems.

“Around 70 per cent of customers are now fixing the problem after learning continuous flow could massively impact their bill. We’ve had incidents of these being repaired within hours of receiving a letter about it,” Cooper says. “It’s a real call to action, all built around the message that water is a precious resource.”

The company can help homeowners repair leaks and offers home visits to install water saving devices and provide tailored efficiency tips. Cooper says the most engaged billpayers are those using the Green Redeem platform, where they can receive rewards for reducing their consumption.

“Metering is big investment with lots of gangs out in the streets digging up roads and people going into homes to fit meters, but we refer to this very much as a customer change programme.”

The smart meters have highlighted that around 30 per cent of leakage was happening in or around homes but also give a far richer picture of the whole supply area.

“Before we were putting a lot of water into an area and only knew where 20-30 per cent of it was going because that’s the number of metered properties; but now we’re increasing meter penetration so we know where 80 per cent of our water is going, not just 30. That helps us really effectively target leakage detection on the network.”

The company has begun linking smart meter data with acoustic logger data and other devices to better target leakage across networks. That information can be compiled and analysed to understand where water is going, how much is consumed and what is wastage.

“It’s a massive win for us: it helps our customers, it helps us stop taking so much water from the environment on the customer side, but it’s really game-changing for detecting leakage on our networks.”

The jump from bi-annual reads to hourly means billpayers can engage with metering and data at deeper levels, but how interested are they? Cooper believes the key is to design smart tools that allow people to interact with their usage at a level that suits individual households.

“The meter is just an enabler to a longer-term smart relationship with our customers around consumption, which when they’re unmeasured is very difficult to have,” he says. “The difference between smart energy and water meters is not just the customer lens, but the lens that looks back and helps us with our own leakage challenge in our network.”

During AMP7 the company and its partner Morrisons Utility Services will install 660,000 meters with a plan to move up to around 70 per cent penetration across the whole estate in the next 10-15 years. The first million will predominantly be in London, but a programme in Thames Valley has begun. During this AMP installations will also begin in the Swindon and Oxford area which have supply and demand challenges.

Getting into those hard to reach places

The goal of 70 per cent penetration is limited by the number of hard to meter properties in London. Challenges include blocks of flats and converted buildings for which the water supply is partly or wholly shared; insufficient space to install meters; separating pipework configurations from neighbouring properties.

In some locations Thames can install bulk supply meters onto shared properties to measure water going in by creating a small supply area within a larger one that indicates any continuous flow to identify leakage.

As well as working with meter companies on designs for more compact spaces that work with the radio network, Cooper says there is a need for innovation around hot water meters.

“At the moment there is a lot of blocks of flats with shared hot water supplies and individual cold-water supplies. We would want to put a meter on the cold supply and capture the individual hot supply going into each property with an individual hot water meter, but these have a shorter shelf life than cold meters so more innovation is needed here.”

He says there has been some success with the numerous installation challenges and the importance of supervision should not be underestimated. “Throughout the programme we ensure our plumbers don’t simply walk away from complicated cases. We review the photos from every job that is deemed un-meterable and we’ll always try again if we decide it could be possible.”

As the programme rolls out across the diverse regions Thames services, Cooper says information from the meters will be invaluable to encourage householders to use less and spread demand at peak times with tailored messages.

This is especially poignant for places experiencing water stress as the company works to reduce its abstraction from rivers and vulnerable chalk streams and Cooper says the company recognises the role smart meters have in that.

“Metering is absolutely at the heart of our water resource management plans to reduce abstraction and improve resilience. Metering is going to be a significant component of our PR24 plans as we drive to reach the 70 per cent penetration and beyond.”