The past week has seen renewed calls for the nationalisation of utilities, coming amid reports of underperformance at some water firms and surveys showing public scepticism about the wider industry’s impact on society. James Wallin asks whether we are making it too easy for under-researched renationalisation policies to capture the public imagination, and looks at how a defence can be mounted.

While its tactics are already losing the shock factor, there is no denying the impact Extinction Rebellion had when it launched its fortnight of frustration back in April.

Its approach caught industries and authorities off-guard and seemed able to penetrate public consciousness about climate change in a way that perhaps only Sir David Attenborough had managed up until that point.

The message was a simple and effective one but the evidence base behind many of its flagship demands was shaky.  Its call to decarbonise the UK by 2025 is dismissed as impractical by all the experts, yet it was deemed a reasonable enough position to be one of the questions posed to the then-five candidates for the Conservative crown during the BBC’s live debate.

If there is a pragmatic side to this approach, it is presumably the theory that setting unreasonable demands makes ambitious ones appear more reasonable.

Even so, the unintended consequence is in making the public sceptical about just what a feat net-zero emissions by 2050 really is.

The theory is the same for the re-nationalisation debate, which was described by Labour’s shadow chancellor, John McDonnell in an interview this weekend as having “no net-cost” because all the industries being taken back would pay their way. McDonnell was at pains to point out in that interview that he does not see all sectors as ripe for nationalisation but utilities are sure-fire targets. 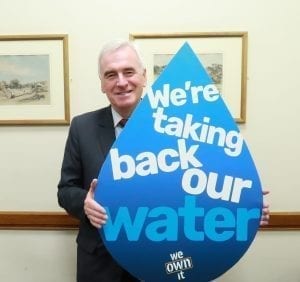 McDonnell was one of many Labour MPs who trooped through the official launch at Westminster last week of We Own It’s People’s Plan for Water – a blueprint for renationalisation.

While water has clearly been picked as ostensibly the most straight-forward industry to tackle first, that doesn’t mean We Own It has no designs on the energy sector. It seems to think multiple nationalisations could be pushed through simultaneously and is working on a People’s Plan for Energy, it says. Labour has also set out its intentions to ‘Bring Energy Home’, which would also see shareholders compensated with government bonds.

The hallmarks of We Own It’s proposals for the water sector are set out here, alongside a rebuttal from Water UK, which says the whole proposal is “fundamentally flawed” because it is based on inaccurate data. The plan incorporates a dizzying array of ideas of what could be done under a nationalised water industry as well as apparently fixing all the problems it has been grappling with for the past 30 years.

None of it is costed, nor is there any real idea of what the initial price of buying the industry back would be. Estimates on value range between Moody’s £14.5 billion, which is Labour’s starting point, to Ofwat’s £73 billion total market value. We Own It refuses to engage in the debate at all, saying that shareholders have already racked up billions in dividends and deserve no further compensation.

It may appear pointless to engage in this kind of evidence-averse, wish-list approach to lobbying and I’m sure there will be many readers wondering why exactly Utility Week is indulging We Own It’s approach.

The problem is that the lobby group and the Labour party have adopted a very simple message which has the potential to penetrate public consciousness unless it is robustly challenged. Especially with the water sector, this message is being compounded by the wider picture that has been painted over the past few weeks.

Following the ‘dark week’ highlighted by Ofwat chief executive Rachel Fletcher after the Southern Water case, we have had a damning report by the Environment Agency, criticisms of complacency among water companies from CCWater and an investigation into whether Thames Water has abused its dominant position in the market.

I fully appreciate that most of these stories contained numerous reasons to be cheerful. Fletcher praised the positive work being done by the sector and the improvements Ian McAulay has made at Southern. In the EA report, Northumbrian Water was held up as an example, for turning itself around from a 2-star to an industry-leading 4-star rating in a year. It should also be noted that across the board the most severe cases of pollution fell in 2018. While CCWater said it was disappointed in the actions of water companies, it also revealed 90 per cent of customers are ‘satisfied’ with their water services – a score other industries would kill for.

But for too long these positives have been lost in the white noise around failings and own goals. Meanwhile, the nationalisation debate has continued to rumble on and the industry has consistently failed to put up a coherent defence of itself. Is this down to a lack of confidence or communication?

While the energy sector has not suffered the same onslaught of bad news recently, it will have been worrying to read the survey published by Utility Week last week showing that utility companies are currently viewed as more a part of the problem of climate change than the solution.

Steps in the right direction

An example of a really positive step towards proactively tackling public perception came with the signing of a public commitment organised by Water UK, tying the sector to some very ambitious targets. This is the kind of forward-thinking, proactive call to the arms that the industry desperately needs to fight its corner in the face of lazy accusations against free markets.

But, if promises are going to be set, they must be met. The easiest way to gift victory to the opponents of privatisation is to have to backtrack on self-imposed commitments.

That is why Utility Week this year launched our New Deal for Utilities campaign, giving a platform to show the industry’s commitment to drive forward improvements to resilience, transparency and the role of utilities within the wider social fabric of the country. With public trust at an all-time low, New Deal was launched precisely to address this populous mood swing, with the aim of forging a new social contract with the public and highlighting what help they would need from policymakers to deliver on their pledges.

McDonnell admitted to the Sunday Times that he has not spoken to any utility bosses about his fervour for renationalisation, nor does he intend to because “we have a thorough analysis of where they’ve gone wrong….. I don’t need to see the chief executives of the companies to explain that to me”.

This complacency needs to be punished. The sector needs to be willing to be open about mistakes that have been made since privatisation but also highlight the benefits it has brought in terms of investment and professionalism.

More importantly, we collectively need to share the roadmap for future success and the solutions to the many hurdles the utility sector has in front of it. If we can move the argument away from accusations about the past and towards aspirations for the future, we can wrestle the agenda back.

Innovation is the key

This is why the innovation fund proposed by Ofwat this week is so vital. Utility companies need to be seen as presenting solutions, not providing problems. While the ultimate aim must always be to provide a good service and a fair price, businesses have the potential to be problem-solvers across so many areas of society, through innovative thinking and close partnerships. This was very evident last week, when I visited Northumbrian Water’s Innovation Festival, which brought together 700 organisations to tackle issues ranging from protecting rural waterways to designing the vehicles of the future. The solutions being developed there have practical applications far beyond the core services offered by Northumbrian and allows the company to connect with people in entirely new ways.

It is this spirit of innovation which Ofwat is keen to build on and the start of the new regulatory period offers a perfect opportunity to highlight the difference the sector can make. With two high profile retirements among the major water companies (Chris Jones at Welsh Water and Richard Flint at Yorkshire Water) there is also an opening for the new leaders of these firms to make a real difference.

This kind of positive momentum and collaborative working can show the best of free markets and provide a counterpoint to the tired argument still being trotted out by proponents of nationalisation.