The chancellor has announced a review of paying for net zero carbon – what thinking might he draw on? David Blackman reports.

This week’s 50th anniversary of the first Moon landings has sparked an outpouring of memories about the US space programme’s mightiest single achievement.

Extraterrestrial travel isn’t exactly the most sustainable activity, given the huge amounts of rocket fuel required to lift a handful of people beyond the grip of the Earth’s gravity. Nevertheless, environmentalists have drawn lessons from how US president JF Kennedy launched the 1960s space race for how contemporary societies should tackle the transition to a carbon-free future.

They include economist and Third World debt campaigner Ann Pettifor, who argued at a Labour party debate last week in London that the US’s collective will overrode conventional financial concerns. “Nobody raised the question of how we were going to finance that choice to go to the Moon,” she said.

But there is no question that getting on to a carbon neutral track will be expensive. Reaching net zero emissions by 2050, which was enshrined into law earlier last month, will cost the equivalent to 1 to 2 per cent of UK GDP, the Committee on Climate Change has calculated. How it will be paid for and how the costs are distributed across society is becoming a central question.

The concept of the “just transition”, marrying environmental and social justice, is increasingly a buzzword, particularly on the left of politics. 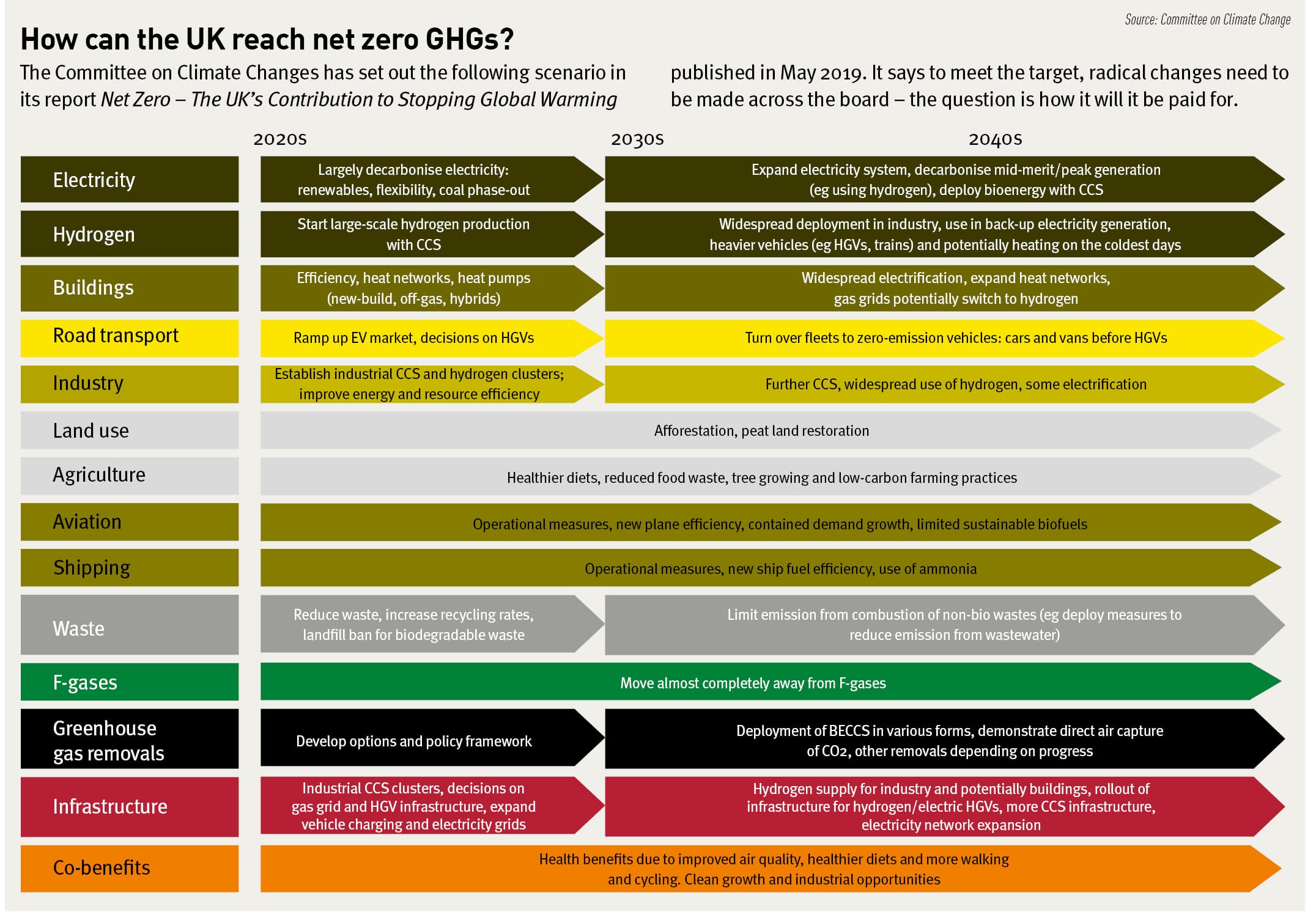 The Treasury announced last month that it is launching a review to explore how the costs of delivering a net zero emissions goal should be shared across the economy. And beyond Whitehall, the IPPR thinktank has established a commission under the chairmanship of ex-Labour leader Ed Miliband to map out how the transition to decarbonisation can be achieved without sacrificing social equity. The same question will be put under the microscope at the Citizens Assembly, which is being assembled this autumn by six select committees to thrash out a route map to net zero.

A quick glance across the English Channel, where the “gilets jaunes” protests have become a regular and sometimes violent feature of the Parisian weekend since the autumn, shows why the UK’s politicians are right to worry about the risks of not bringing people on board. The high-vis jacketed protestors’ movement was sparked by French president Philip Macron’s decision to hike fuel taxes, which prompted the rallying cry: “They worry about the end of the world, we worry about the end of the week.”

In the UK, environment-related civil disruption has so far been the preserve of the climate change campaigners at Extinction Rebellion. But a potential backlash was on the mind of Polly Billington, Miliband’s adviser on environmental issues when he was Labour leader, who also spoke at the London debate.

“Climate change is a class issue. I’m fed up with it being something that people care about who don’t have anything else to care about. The working class is going to be screwed over if climate change is not tackled.

“Building public consent is not going to be easy. If we don’t get this right, the divides will be as profound as over Brexit.”

She was backed up by shadow Treasury spokesman Clive Lewis, who is leading efforts to hardwire environmental sustainability into the opposition’s economic thinking.

“If you don’t have economic and social justice at the heart of your transition to a more sustainable society, you won’t bring people with you,” he said.

“The fight for sustainability is also a fight against inequality; the poor cannot consume what they don’t consume, but the rich can,” he added, pointing out that the richest tenth of society are responsible for a disproportionate slice of overall emissions.

Luke Murphy, who is running the IPPR commission, says: “Issues of economic justice are central to solving the climate emergency. If done in the wrong way, it could exacerbate economic and social injustice.”

“If you do it in the wrong way, you are going to lose public support. The speed and scale we need to go at means ensuring it’s a fair and just transition,” he says, recalling how previous industrial shifts have been mishandled.

Breaking with the past

The dramatic plunge in coal use for power generation has been widely celebrated over the past year for its contribution to plunging carbon emissions.

However, memories are still raw in many communities of the social havoc that the closure of the UK’s deep mines caused for the communities involved. The worry is that the transition from a fossil fuel economy will have a similarly disruptive impact in terms of jobs and livelihoods.

Meanwhile, the government’s reliance on using electricity and gas customers to subsidise the costs of decarbonisation through their bills is coming under strain. The GMB union published figures last week from a poll showing that only 20 per cent of people think the cost of decarbonising electricity should be funded primarily through customer bills.

More broadly, such subsidies are viewed, including within utilities, as regressive because they bear down proportionately on the poor. Murphy says: “The best way of paying is through general taxation rather than through energy bills.”

The GMB’s solution is that the cost of decarbonisation should be funded via increased corporation tax. A more direct option is to target the emissions problem directly by increasing the price of carbon. Professor Dieter Helm of Oxford University proposed in his cost of energy review for the government replacing all other green funding mechanisms, such as CfDs (contract for difference).

Josh Burke, a fellow at the London School of Economics Grantham Institute, argues that carbon prices can be “carefully designed” to ensure the burden doesn’t fall unduly on those who can least afford it”.

“A carbon tax can be designed in a way that is progressive,” he says, claiming other countries have been “more canny” about how they use the proceeds from carbon taxes.

Of the 29 countries that operate a carbon tax, the UK is one of only eight that doesn’t hypothecate the revenues raised from the levy, he says. (This means linking the revenue to decarbonisation measures.)

The Canadian state of British Columbia, for example, gives the public a breakdown of how carbon tax revenues have been spent. Getting the message clear is key to selling such levies to the general public, says Burke: “You need to communicate that these taxes are there to correct a market failure and the money is being spent on something associated with that.”

The Grantham Institute recently published a report that advocated increasing carbon prices for businesses to achieve net zero emissions by 2050. The revenue would then be used to pay for things such as CCUS (carbon capture use and storage) plants and tree-planting programmes.

Carbon taxes are too blunt a tool to rely on to achieve the transition to a net zero society, argues Dustin Benton, policy director at Green Alliance. “We’ve moved past the point where a single price of carbon for the economy makes sense

“Policies that might in theory seem less efficient are more efficient and dynamic,” he says, pointing to the success of the CfD regime in helping to drive down the costs of offshore wind power.

Instead, he believes, carbon levies are a “useful adjunct”, giving as an example how they have helped to drive coal off the electricity generation system.

“We have a stock of coal and gas plants that are fundamentally very similar and do almost exactly the same thing. The carbon price has been extremely effective at telling operators to use gas and not coal.

In place of a one-size-fits-all carbon price, the Grantham Institute recommends setting different carbon prices for different sectors of the economy. For example, it proposes that the carbon price for the power sector should be raised to £40/tCO2e by next year, up from around £35/tCO2e today, rising to £120/tCO2e in 2050.

“It is economically sound but politically challenging, so let’s have different prices across different sectors to reflect the different technological costs and economic concerns,” says Burke, who until recently headed energy research at the influential right of centre Policy Exchange think-tank. This differentiated approach would be “more practical and politically feasible”.

The potential prizes are enormous, he argues. Even a carbon price of £40/tonne would raise £40 billion a year, which could subsidise the next wave of renewable technologies like wave and tidal.

Those kind of figures could whet the appetite of Philip Hammond’s successor as Chancellor of the Exchequer.